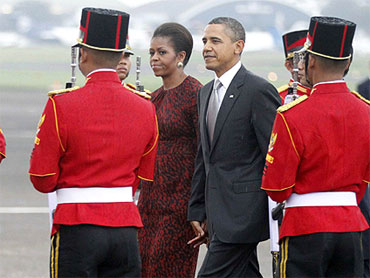 President Barack Obama said Monday he is making progress toward ending the misunderstanding and mistrust between Muslim countries and the United States, but the effort is incomplete.

"This kind of activity is never helpful when it comes to peace negotiations," Obama said.

The president said his efforts to improve the relationship between Muslims and the West have been "earnest" and "sustained". Still, he said the progress is "incomplete" and there is more work to do.

Though issues of terrorism and extremism often dominate the tensions between the Muslim world and the west, Obama said the relationship must expand beyond security issues.

"What we're trying to do is make sure that we are building bridges and expanding our interactions with Muslim countries," Obama said during a joint news conference with Indonesia's President Susilo Bambang Yudhoyono.

Obama's stop here, the second country on his 10-day Asia trip, is a homecoming for the president. He spent four years in Indonesia as a boy after his mother married an Indonesian man, and his return was highly anticipated.

Mr. Obama arrived in Jakarta Tuesday afternoon aboard Air Force One for what was supposed to be a brief, 24 hour visit. However, upon arrival, the White House said even that schedule may have to be cut short due to concerns over ash spewing from Indonesia's Mt. Merapi volcano.

Mr. Obama is expected to be in Indonesia only about 21 hours and possibly less. That may be disappointment for the president, who really wanted to spend some time in his boyhood hometown, reports CBS News White House correspondent Chip Reid.

"Much has been made of the fact that this marks my return to where I lived as a young boy," the president said. "I will tell you, though, that I barely recognize it."

Few Indonesians now believe Mr. Obama will change American policies in the Middle East or improve U.S. relations with the Muslim world. And hopes that the two countries would march forward together on the world stage have been cast aside.

While Indonesians take tremendous pride in having partially raised the American president, who spent four childhood years in the country, the plans for his long-anticipated homecoming Tuesday have been accompanied by a sadness that he is not fully theirs.
He's already canceled two planned trips and was due to stay for no more than 24 hours. He will meet President Susilo Bambang Yudhoyono, tour the country's largest mosque and make his speech that will give him another opportunity to convince Muslims that the U.S. is not waging a war on Islam, but on terrorism, and needs the help of moderates to fight it.

That will give him no time to visit his old neighborhood in the sprawling overcrowded capital - a jumble of houses and narrow streets that has changed little since he was here from 1967 until 1971, although it is now in the shadow of luxury shopping malls and high-rise buildings.

The president's tightly packed schedule in Indonesia does not even allow time for brief meetings with family and friends.

"I have waited so long for this visit," said Katarina Fermina Sinaga, 61, who taught the chubby, vivacious boy, then known as "Barry," in the third grade. "I know as the world leader, his schedule is tight, but I still hope to meet him.

"I just don't want him to forget us."

When he was first expected to come in March and then again June, the country whipped itself into a frenzy of anticipation: Books and movies about his childhood were released, celebrations planned, and exhibitions mounted.

But this time, the country seems sapped after twin natural disasters - a volcano and a tsunami - over the past two weeks that killed a combined total of 600 people. There was speculation Obama would cancel again, and the country has been unwilling to get its hopes up, too drained to put on a big show. Even the government waited until the last minute to announce that the visit was on.

Hopeful he still might make a last-minute stop to his old elementary school, dozens of third- and fourth-graders, dressed in green-and-white uniforms, spent Tuesday morning practicing a song dedicated to him.

"We haven't been told anything," said Hasimah, the clearly disappointed headmaster. "So we don't know how to prepare."

Though religious leaders still believe in him, they, too, have lost some of their gushing enthusiasm.

With peace talks in the Middle East moving slowly, many believe he is not much better than his predecessor, George W. Bush.

Still, there is sense, even here, that what Indonesians want most is a little attention.

"He's not even taking time to meet with us," said Din Syamsuddin, the leader of the country's second-largest Muslim group, Muhammadiyah, whose 30 million members had high hopes for Obama. "Even Bush did that ..."

Obama moved to Indonesia when he was 7 after his mother, Stanley Ann Dunham, married her second husband, Lolo Soetoro, whom she met when they were studying at the University of Hawaii.

The neighborhood they first called home was Menteng Dalam, a Dutch-era neighborhood with red-tiled roofs in Jakarta's center, where many share fond memories of the young Barry.

They remember that his mother would walk him to school through streets muddied by monsoon rains, that he was comfortable speaking Indonesian, and that the family kept white crocodiles and a monkey in their yard.

"Ya, I heard he'll be coming today," said Satari, a 20-year-old streetside vendor, as he dished up a bowl of Bakso, the same spicy meatball soup the president says he loved as a child.

A 65-year-old customer, Linggas Sitompul, jumped in: "We really have to greet him like a homecoming brother."

Before Obama's inauguration, Indonesia viewed the United States mostly as a target for protest. Hard-liners viewed the George W. Bush administration's anti-terrorism efforts as a proxy for anti-Muslim feelings.

They had hoped that Obama's connection to Indonesia would give it a special place in his administration, but two years into his term, reality has set in. Most now recognize his visit will not improve their poverty or raise their national stature.

And they know that despite feeling a kinship with the American president, in the end, he will leave and go back to the place that is really his home.