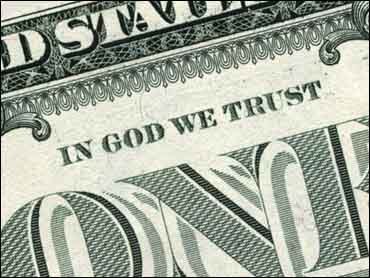 CHICAGO -- A federal court has ruled that printing "In God We Trust" on U.S. currency doesn't amount to a religious endorsement and therefore doesn't violate the U.S. Constitution. The Chicago Daily Law Bulletin reports the 7th U.S. Circuit Court of Appeals in Chicago made the ruling Thursday in a lawsuit brought by a self-declared Satanist, Kenneth Mayle. He argued that the motto propagates a religious view he opposes.

A lower court tossed the suit citing a Supreme Court decision that a motto on currency isn't something people display prominently and thus that people are not forced to publicly advertise views that clash with their own.

Mayle appealed to restore the suit, but the 7th Circuit refused, describing the phrase as a "historical reminder" of the nation's heritage.

First stamped on a two-cent coin during the Civil War, and on all U.S. coins starting in 1938, "In God We Trust" owes its debut on our bills to the Cold War.

Representative Charles Bennett of Florida had campaigned hard for the words, seeing them as a bulwark against what he called "materialistic Communism."

Mom dies after she was struck by lightning in Florida
Thanks for reading CBS NEWS.
Create your free account or log in
for more features.
View CBS News In
CBS News App Open
Chrome Safari Continue
Be the first to know
Get browser notifications for breaking news, live events, and exclusive reporting.