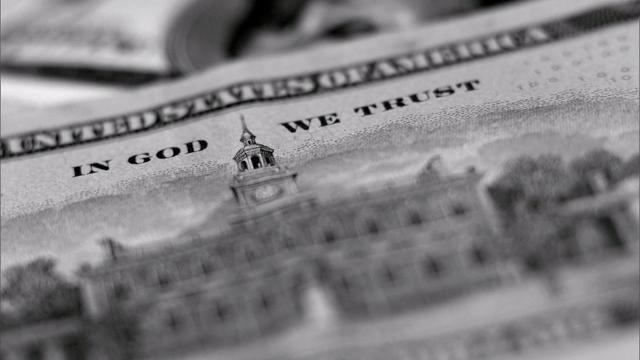 And now a page from our "Sunday Morning" Almanac: October 1st, 1957, 60 years ago today … the day a familiar phrase gained currency.

For that was the day the words "In God We Trust" first appeared on America's paper money.

First stamped on a two-cent coin during the Civil War, and on ALL U.S. coins starting in 1938, the phrase owes its debut on our bills to the Cold War.

Representative Charles Bennett of Florida had campaigned hard for the words, seeing them as a bulwark against what he called "materialistic Communism."

Occasionally challenged on separation of church and state grounds, these official invocations of God have been upheld by the United States Supreme Court.

And they've been upheld in popular culture as well, as in the 1994 remake of "Miracle on 34th Street," in which a judge finds guidance thanks to the U.S. Treasury's faith in the existence of God:

"Then the State of New York -- by a similar demonstration of the collective faith of its people -- can accept and acknowledge that Santa Claus does exist."

Opinions may differ as to whether those two beliefs are, in fact, equivalent.

But after 60 years, there's no disputing that America's professed faith in God is ... on the money.