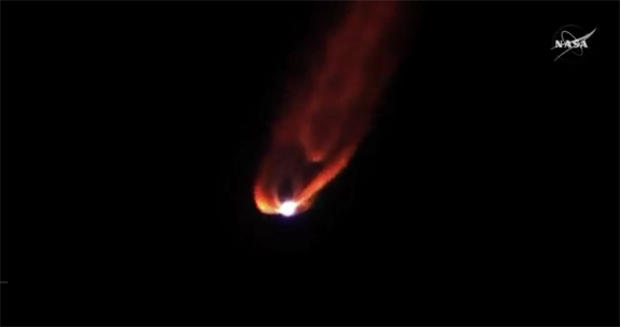 Running a day late because of trouble with ground equipment, the Antares’ two RD-181 first-stage engines ignited with a burst of flame at 7:45 p.m. EDT (GMT-4) -- five minutes behind because of an unspecified problem -- throttled up to a ground-shaking 864,000 pounds of thrust and quickly pushed the 139-foot-tall rocket away into the night sky.

Burning liquid oxygen and refined kerosene, the Antares initially climbed straight up from pad OA at the Mid-Atlantic Regional Spaceport -- MARS -- at NASA’s Wallops Island, Va., flight facility before arcing over onto a southeasterly trajectory over the Atlantic Ocean, launching directly into the plane of the space station’s orbit.

Despite carrying some 5,100 pounds of station-bound equipment and supplies, the launching was as much a test flight as an operational mission. More than a few observers, remembering the spectacular explosion that destroyed the last Antares just after liftoff in 2014, felt a bit more nervousness than usual awaiting liftoff.

“We’re always nervous, but we wouldn’t have a rocket out there if we weren’t confident we’re ready to go,” Mike Pinkston, Orbital’s Antares program manager, said Saturday.

The stakes were especially high for NASA in the wake of a Sept. 1 launch pad explosion that destroyed a SpaceX Falcon 9 rocket during a pre-flight test at Cape Canaveral, knocking NASA’s only other U.S. space station resupply contractor out of action for at least the next several months.

But the redesigned Antares chalked up a picture-perfect climb to space Monday, putting on a dramatic evening sky show for observers along the East Coast as it climbed away and accelerated toward orbit.

The RD-181 engines apparently worked as expected, shutting down four minutes after launch. Seconds later, the stage fell away and an Orbital ATK-built solid-fuel motor powering the rocket’s second stage ignited for a three-minute burn to complete the boost out of the atmosphere.

Nine minutes after liftoff, the Cygnus cargo ship separated from the spent second stage and set off after the International Space Station. If all goes well, the cargo ship will catch up with the lab complex early Sunday, pulling up to within about 30 feet and then standing by for capture by the station’s robot arm.

From there, flight controllers at the Johnson Space Center in Houston will pull the spacecraft in for berthing at the Earth-facing port of the forward Harmony module.

Equally important, if not more so, the Antares launch marked a major milestone for Orbital ATK and NASA, coming almost exactly two years after the last Antares exploded seconds into flight on Oct. 28, 2014.

“This is a very exciting time for us,” said Frank Culbertson, a former space shuttle commander who now serves as vice president of Orbital ATK. “I want to thank everyone who’s had a part in getting us back to this point, getting ready for a launch after two years. A lot of hard work has gone into this.”

Joel Montalbano, deputy director of the International Space Station program at the Johnson Space Center, said NASA “is glad to be back at Wallops.”

“We’ve missed these guys, and we’ve missed seeing launches from here,” he said Saturday. “The Orbital ATK team has done just a fantastic job getting us to where we are today, and we look forward to seeing another Cygnus spacecraft berthed to the International Space Station.”

Orbital’s 2014 launch failure was blamed on a turbopump in a Russian-built AJ-26 engine left over from the ill-fated Soviet moon rocket program. The resulting explosion destroyed the rocket, more than 5,000 pounds of needed station supplies and equipment and caused about $15 million in damage to pad OA at the MARS spaceport.

In the wake of the failure, Orbital managers decided to discard the 1970s-era Russian engines used in the five Antares rockets launched to that point and to replace them with more powerful RD-181 engines, built by Energomash in Russia.

In the meantime, Orbital purchased two Atlas 5 rockets from United Launch Alliance to help make up for the Antares failure and fulfill the company’s $1.9 billion contract with NASA to deliver some 44,000 pounds of supplies and equipment through 2016. NASA subsequently purchased three more supply missions and Orbital won a follow-on contract to continue station resupply flights through 2024, the current space station retirement date.

To power the redesigned Antares, Orbital ATK reportedly ordered 20 RD-181 engines from Energomash, with two options for 20 engines each, in a deal Russian media outlets claimed was worth about $1 billion. Orbital officials disputed that number, saying the actual cost, even with options exercised, was much lower.

After capture by the station’s robot arm Sunday, the Cygnus cargo ship will remain attached to the lab for about a month. As they unload the module over the next several weeks, the station astronauts will repack it with about 3,000 pounds of trash and no-longer-needed equipment.

Before falling back to Earth and burning up in the atmosphere, a final experiment will be carried out to study how fire propagates in weightlessness, a follow-on to research performed on an earlier mission.

“Fire is a significant risk in spacecraft, but the problem is not limited to the fire itself,” said David Urban, principal investigator for Saffire-II experiment at NASA’s Glenn Research Center. “You really have to understand how it interacts with the entire vehicle.”

A fabric sample 3.2 feet long by 16 inches wide will be ignited in a vented enclosure mounted inside the Cygnus capsule. Cameras will record the fire and sensors will measure temperature and other factors. The video and data will be downlinked before the cargo ship plunges back into the atmosphere several days after leaving the station.

Another flame-related experiment will be carried up aboard the Cygnus and moved into the space station for operation. Known as “Cool Flames,” the research is focused on how small droplets of fuel burn in the microgravity environment of space.

“As everyone probably knows, the combustion of liquid fuels is a major source of energy in the world today, and the research we’re doing ... is targeted at improving our fundamental understanding of how liquid fuels burn,” said Dan Dietrich, co-investigator at the Glenn Research Center.

Earlier experiments showed that some fuels can continue burning longer than expected. Such low-temperature flames are “very important in a wide range of real engines here on Earth,” Dietrich said. “These low-temperature chemical reactions that are responsible for the burning are responsible for engine knocks in car engines and a lot of pre-ignition kinds of behavior.

“One of the research (interests) is to gain a better fundamental understanding of the chemistry behind these low-temperature reactions, they are very difficult to study on Earth.”