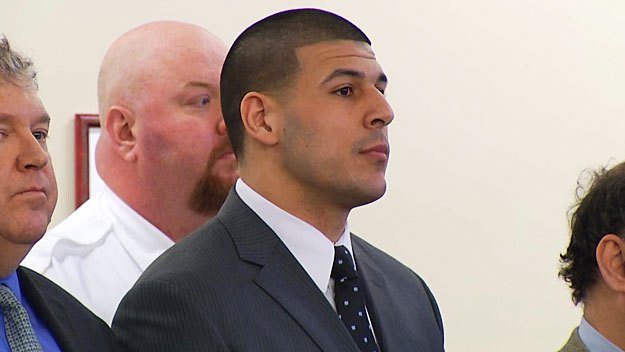 BOSTON -- In death, Aaron Hernandez may not be a guilty man in the eyes of the law.

Under a long-standing Massachusetts legal principle, courts customarily vacate the convictions of defendants who die before their appeals are heard.

Hernandez, a former NFL star, was convicted and sentenced to life in prison for the 2013 murder of Odin Lloyd, a semi-professional football player who was dating the sister of Hernandez’s finance.

Massachusetts prison officials said Hernandez was found hanging in his prison cell in an apparent suicide early Wednesday. His death came less than a week after he acquitted of murder charges in the shooting deaths of two men in Boston in 2012.

Because his appeal in the Lloyd case was still pending, Hernandez’s attorneys can move to have that conviction erased, said Martin Healy, chief legal counsel for the Massachusetts Bar Association.

“For all intent and practical purposes, Aaron Hernandez will die an innocent man, but the court of public opinion may think differently,” said Healy.

The legal principle is called “abatement ab initio,” or “from the beginning.” It holds that is unfair to the defendant or to his or her survivors if a conviction is allowed to stand before they had a chance to clear their names on appeal, in case some kind or error or other injustice was determined to have occurred at trial, Healy said.

“It’s a surprising result for the public to understand,” he added.

All first-degree murder convictions in Massachusetts trigger an automatic appeal. Hernandez’s appeal had not yet been heard by the state’s high court.

Gregg Miliote, a spokesman for the district attorney’s office which prosecuted the Lloyd case, would not comment on the possibility of the conviction being vacated.

The principle can also have a major impact on civil cases. If Hernandez’ conviction in the Lloyd case is tossed, no evidence presented during Hernandez’ criminal trial can be presented in civil court, and a lawyer suing the estate will not be able to reference the conviction, Healy told MassLive.com.

“Now they can’t just introduce that murder conviction and say, OK, he killed my son, brother, cousin, whomever it may happen to be who are suing,” CBS News legal analyst Rikki Klieman explained on CBSN. “What they have to do now is prove that first murder all over again.”

Lloyd’s family attorney announced Wednesday that they will continue pursuing the wrongful death suit despite Hernandez’ death. “Odin Lloyd was a provider. He cared very much for his mother and the household and did many things to keep it going,” attorney Doug Sheff told CBS Boston.

Hernandez’ death is also likely to affect civil suits expected to be filed by the by the families of the victims in the most recent case, in which Hernandez was acquitted.

Attorney William Kennedy represents the estate of Safiro Furtado and the family of Daniel de Abreu in wrongful-death lawsuits against Hernandez. He said despite Hernandez’s acquittal in criminal court last week, the families still plan to try to hold Hernandez accountable for the killings in civil court.

Kennedy says the lawsuits will go forward, but will now be against Hernandez’s estate.

“I think they might have rather had Aaron Hernandez in the courtroom during the civil suit, being able to go after him in person, as well as by deposition, if they could,” Klieman said.

Kennedy says the families of Furtado and de Abreu “understand what kind of loss” Hernandez’s family is dealing with now.  He said the relatives “don’t take any joy” in Hernandez’s apparent suicide, even though they believe he was responsible for their deaths.