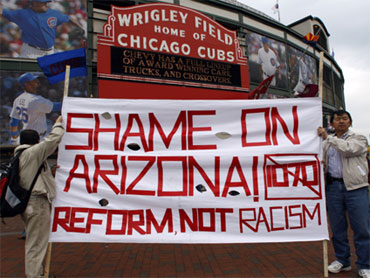 Chicago-area immigration reform activists opposed to a tough new Arizona law say they'll be back at Wrigley Field the next three days as the Cubs play the Diamondbacks.

Most fans heading into the game seemed bewildered by the protest.

Cubs fan Tom McGrath says protesting outside a baseball game made the cause seem silly.

Activists nationwide have called for a boycott of Arizona tourism and businesses, including its athletic teams. The law makes it a state crime to be in the United States illegally and lets police question anyone they suspect of being an illegal immigrant. The law is slated to take effect this summer.

Mike Freeman: All-Star Game should emigrate from Arizona over immigration