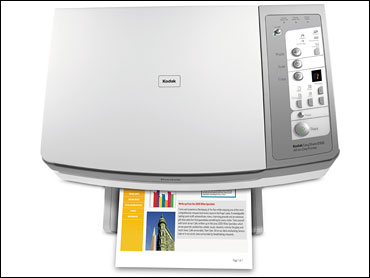 Gasoline is expensive but it's nothing compared to the cost of printer ink. If you do the math, you'll discover that the liquid ink inside those cartridges you buy for your ink jet printer can cost more than $13,000 a gallon.

That particular cartridge, according to HP, yields 140 color graphic pages at a cost of nearly 13 cents a page, which actually isn't that bad by printer industry standards. Some cartridges from HP and other companies cost less per page and some more, but the cartridge you get to buy and the cost per page depends on what printer you own.

For years, printer manufacturers have been offering low cost printers only to make it up on ink but that's starting to change now that consumers are becoming a bit savvier about how much printers actually cost to use. Finally, the industry is starting to listen.

So, when you add the cost of ink and paper, it costs about 20 cents to print a 4 by 6 photo, which is generally less than or comparable to what you'd pay at major chain drugstores and other retailers with photo printing kiosks.

Just like miles per gallon figures for cars, estimates of ink cartridge yields are also approximate and subject to all sorts of variables including the density of your documents and photos, the type of paper you use and the quality settings for your printer.

For example, with almost any printer, you can save ink by using the "draft" or "fast/economical" setting in your printer driver dialog box. That's a good idea if you're just printing documents for yourself. For text documents draft mode is usually quite readable.

Kodak's new line of "all-in-one" printers start with the $149 EasyShare 5100 that prints, copies and scans. Next comes the $199.99 5300 that offers the same features, including a 3-inch color display and the capacity to print directly from memory cards.

The machine Kodak loaned me to test is the $299.99 model 5500, which also handles faxes and comes with a 35 page automatic document feeder. Each printer prints black text at up to 32 pages a minute and 4 by 6 color photos in about 30 seconds. As with ink use, speeds can vary depending on conditions and settings.

Kodak isn't the only printer company with economical ink. I recently tested one of Hewlett Packard's Officejet Pro 7000 line of multi-function devices, which start at $299.99 and yield 2,350 black pages on one $35 ink cartridge.

That's about 1.5 cents a page which is actually cheaper than most laser printers. These HP printers are incredibly good for both black and color business documents. They can print glossy photos, but this line of printers aren't optimized for this purpose and don't have a special tray for 4 by 6 photo paper.

As you'd expect from Kodak, which is trying to survive the transition from film to digital, the printers do a great job with photos. I was very impressed with the quality of the 4 by 6 prints I made and the black text documents were comparable to other high-end ink jets I've tested.

I was also impressed with the device's ease of use and the user interface on Kodak's drivers. For example, the printers have a 100 sheet main paper tray for 8 ½ by 11 or legal sized paper plus a special for 4 by 6 photo stock. To print a photo, you put the paper in the tray and push it in. That's pretty typical but unlike other photo printers I've used, the process worked every time and I never had a paper jam when printing photos.

The other thing I liked is the user interface on the printer driver software. When you select printer "properties" as you're about to print, your options are presented to you in large easy to understand graphics and text, making it quick and easy to select draft, normal or high quality mode or to take advantage of other features like automatic two sided printing (on the high-end model) or switching between portrait and landscape mode. Of course all printers have these options but Kodak makes them easy to find.

The scanner functions pretty much like all scanners with one extra feature – the ability to put a bunch of photos on the tray at once and have the software automatically create separate files for each photo.

Thanks to printers like the ones I tested from Kodak and Hewlett Packard, it's possible to use an ink jet printer for about the same cost per black page as a laser printer and still have the advantage of being able to print in color.