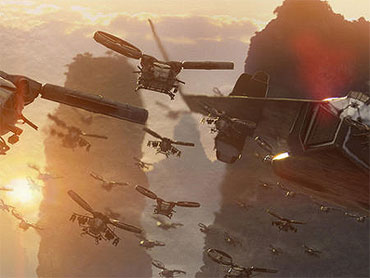 This article was written by CNET News.com's Daniel Terdiman.


About a year ago, with James Cameron's science-fiction epic "Avatar" well under way, it became clear that Weta Digital, the visual effects studio doing much of the computer generated imagery (or CGI) on the project, was a bit in over its head.

At that point, the movie, which opened Friday, was about 40 minutes longer than it ended up being, and what was needed to finish the project was another company that could come in and lend a helping hand - and do so at the same, very high level, that Weta was working at.

And that's where Industrial Light & Magic came in, recalled John Knoll, the Oscar-winning visual effects supervisor tasked with parachuting in to help finish what was, more than on most films, the crucial job of crafting the CGI work.

What followed was months of coordination between ILM, Weta, and Cameron's production company, Lightstorm Entertainment, with a primary goal of ensuring that the two visual effects teams (one in San Francisco and the other in New Zealand) avoided any unnecessary duplication of effort, even as both sometimes found themselves working on effects for the same movie sequences.

For ILM, this wasn't the first time it had been called in to help rescue another effects house, but it may well have been the first time it did so for one as big and as accomplished as Weta. And while ILM's overall contribution to the finished film was minor compared to Weta's, the fact that "Avatar" came out on time and is being seen as a visual tour de force is certainly due, in part, to ILM's ability to come in and, if not save the day, at least contribute mightily to the day turning out well.

For Knoll, the challenge of working alongside Weta was about identifying a body of work that limited the number of assets the ILM team had to develop and which would allow them to be the most helpful. Ultimately, they were handed the keys to creating the visual effects for many of the specialized vehicles in the film, including the Valkyrie, a large shuttle used to move people and equipment, and several different types of helicopters, as well as the landscapes those vehicles lived in.

ILM also did the effects work on the film's final battle scene, taking responsibility for the shots of all the vehicles taking off, as well as the sequence's cockpit interior shots.

Working together on a Scene

For the most part, the teams at ILM and Weta worked on different scenes, but Knoll said there were some in which the two companies handles different parts of the same sequence. An example, he said, was a scene in the film where a group of helicopters attack the giant "home tree," where the Navi, the humanoid alien race in the film, live. Knoll said that the effects in the scene were mainly put together by Weta, but ILM handled all the shots in which the camera looks back toward the choppers.

In the scenes where the two effects houses both were charged with creating shots, the challenge was figuring out how to "checkerboard" the shots, Knoll said, especially because in some cases, ILM didn't know what Weta's work looked like.

"You keep cutting back between ILM shots and Weta shots," Knoll said. "They're really intermixed. I was worried, because we had to get going and go pretty far down the line before we had any Weta shots to refer to. We were both doing development in parallel."

This might have been a serious problem on many film projects, but with "Avatar," both ILM and Weta were working from extremely detailed templates given to them by Cameron. Knoll said that the templates gave his team very specific direction on how they should construct their shots, down to rough indications of the lighting in the scenes.

"It did help that the templates were so specific," Knoll said. "They were very detailed and Jim [Cameron] was very insistent: 'I've put a lot of time into making sure these are exactly what I want them to be, so you need to do a good job of matching that.'"

Still, with both houses working in parallel, there was certainly a bit of a race to finish a shot, Knoll said, because the team that was fastest would be able to more or less set the tone for the whole scene. "Whoever gets there first is who drives it," he said.

"For example, in the home tree sequence, we have to fire a bunch of missiles," Knoll recalled. "[There wasn't] anything established for what the missile trails look like. We did our own version of the what [they] would look like and Jim liked it, so that's what Weta had to match."

Of course, in other cases, Weta would finish first, and ILM would have to match what the New Zealanders came up with. And in some cases, it was a bit of "splitting the difference," Knoll said. Ultimately, he added, he hopes that audience members won't be able to tell that two separate visual effects teams shared the work.

One benefit for the entire film industry of having ILM step in to help out on "Avatar" may be that in working on the project, Knoll and his team came up with a new way to completely computer-generate large-scale, close-up explosions.

Until now, big fiery explosions in CGI-heavy films have been shot with live camera and then had visual effects added to them. But Knoll said that because of some of the limitation of matching Cameron's templates for "Avatar," there was no practical way to meet the movie's explosive needs with live-action.

"We've done CG explosions in the past," Knoll said, "but never with this level of realism, and never this close up."

Fortunately, ILM had pioneered the rendering of the visual movement of fluids in films like "Poseidon" and "Pirates of the Caribbean," and Knoll knew that the shape and movement dynamics of an explosion were similar to that of water.

"The same underlying engine is being used on this," Knoll said. "The motion of the underlying gas is similar to the motion of fluids. The medium is relatively uncompressable. So when there's movement of the medium, it can't change volume real dramatically. So if you push on one side, something has to push on the other side."

That meant that ILM could take the graphics engine it had created for fluid shots in the previous films and apply the same basic technology for the explosions in "Avatar." Though there are clearly some major differences between fluid and big fire - notably that as fuel burns, fire expands, and then retracts when the fuel goes away, the technique was similar enough that the technology could be adapted to the needs of "Avatar."

"I think this is going to be an important technique (for the industry) in the future," Knoll said, "to tailor-make an explosion that looks good close up."
By Daniel Terdiman