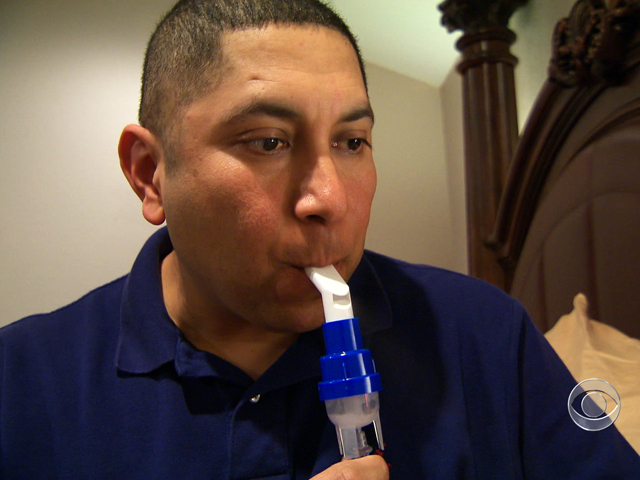 (CBS News) ROBSTOWN, Texas - A mysterious illness is afflicting veterans of the wars in Iraq and Afghanistan. It's a crippling lung disease that targets soldiers assigned to work near burn pits. One wife of a stricken soldier is watching her husband suffer and fighting the battle he no longer can.

LeRoy Torres was a Texas state trooper and a captain in the Army Reserves when he deployed for a year-long combat tour to Iraq in 2007.

"The minute he got back," said his wife Rosie,"he was hospitalized, right when he got back. It was like, 'Okay, it's the Iraqi crud,' that's what we kept hearing. After a few weeks, he started having these breathing attacks. It was the scariest moment ever for us."

Rosie said her husband's health issues resulted from exposure to open-air burn pits, which the U.S. military used in Iraq and Afghanistan to torch everything from batteries to body parts.

The Department of Veterans Affairs acknowledged Balad, where Torres was based, disposed of "several hundred tons per day."

"I was very close to the burn pits," said LeRoy from his bed. "That's where I was housed in. But we didn't think nothing of it."

Today, at age 40, LeRoy is barely able to leave bed most days. His doctors have diagnosed him with a lung disease: constrictive bronchiolitis. He has a lesion on his brain and cysts in his spleen and groin.

"Sometimes the headaches will last for three hours," said LeRoy, "Sometimes I've had a headache for eight days. Eight days straight. It's unexplainable.

"I remember one night thinking, 'Who am I holding?'" said Rosie. "'What happened to the man that I married?' It was at that moment that I thought, 'This is it, I'm going to have to be his advocate.'"

She launched a web site where veteran burn pit victims can register. She also lobbied Congress to take action.

In January, President Obama signed a law giving the Secretary of Veterans Affairs one year to create a national registry to track potential burn pit victims.

Dr. Anthony Szema, a professor at Stony Brook University School of Medicine, thinks that if it wasn't for Rosie Torres, the law wouldn't be in existence. He's been analyzing dust from near burn pits.

"I think clearly we don't allow people to burn things in an unregulated fashion in the United States," said Szema, "and we have EPA limits against the number of particles in the air." He added: "They should not be doing it over there."

As LeRoy Torres' condition worsens, he may not benefit from the new law. His dream job is gone already.

"It ended his career as a trooper," Rosie said, crying.

The national registry of burn pit victims won't be out until at least 2014. In the meantime, doctors are relying on Rosie Torres' unofficial registry: her information and her continuing search for answers.