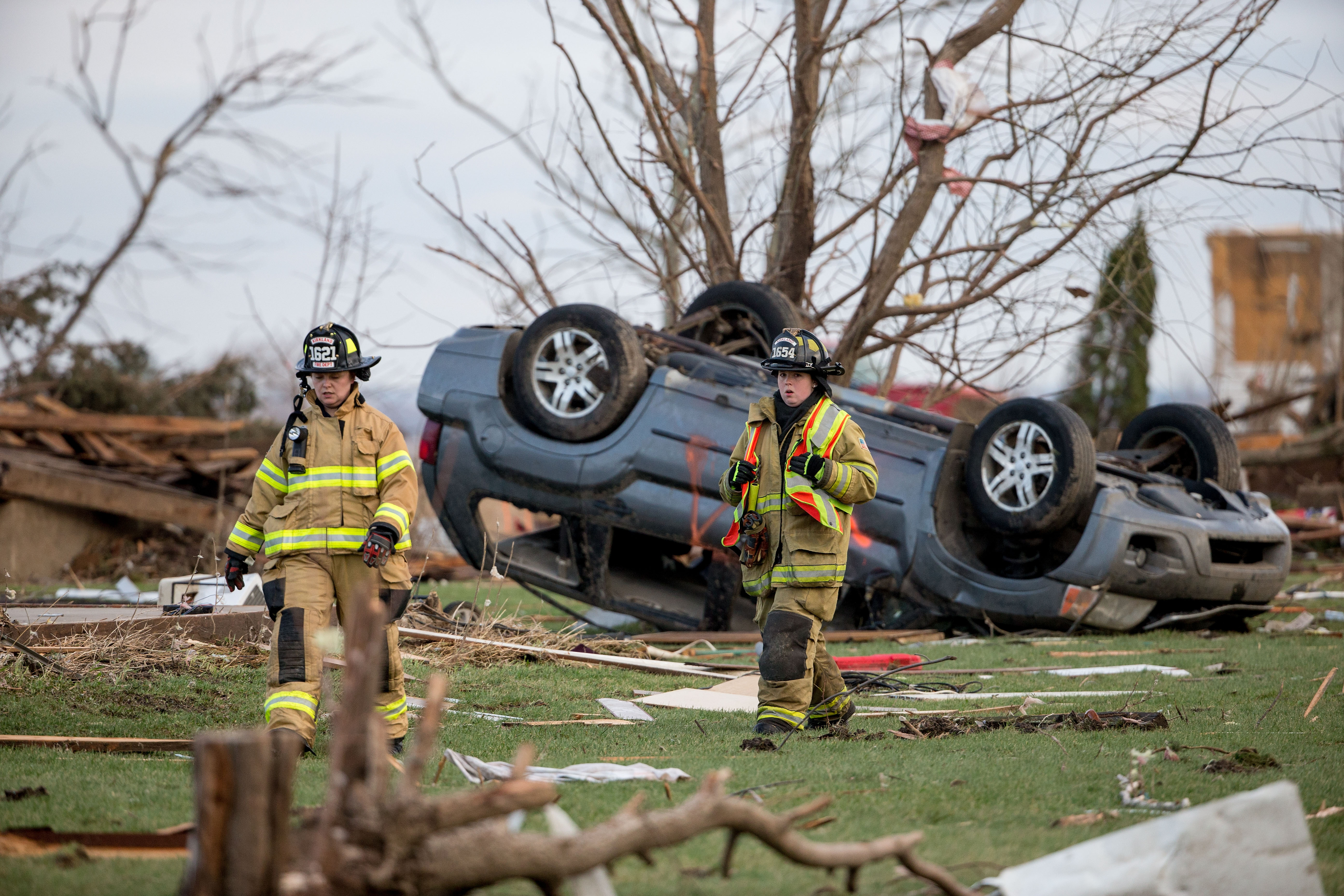 FAIRDALE, Ill. -- A second woman from a tiny Illinois farming community has died, Gov. Bruce Rauner confirmed Friday, a day after tornadoes struck a six-county swath of the state, injuring about a dozen other people and sweeping homes off their foundations.

Crews embarked on detailed searches for missing residents Friday after at least one tornado brought chaos to Fairdale, a town of 150 people, around 7 p.m. the night before.

Residents reported the skies blackening and windows exploding as the severe weather struck. Crews combed through each structure twice into the evening hours and searched again by equipment and by hand Friday morning. The second person killed had initially been reported missing and her body was found Friday morning, Rauner said. Most other injuries were minor.

"We hope and pray that that is all the fatalities," Rauner said. "We are very blessed that more people were not hurt. This was a devastating storm."

About 15 to 20 homes were destroyed in Fairdale, according to DeKalb County Sheriff Roger A. Scott. Matthew Knott, division chief for the Rockford Fire Department, told The Associated Press that just about every building in the town about 80 miles from Chicago "sustained damage of some sort."

One eyewitness said she's never seen a twister so big, that stayed on the ground so long, reports CBS News correspondent Adriana Diaz.

All homes were evacuated as a safety precaution and power was out across the area. The Red Cross and Salvation Army established a shelter at a local high school.

Trees, power lines and debris lay strewn on the ground. Some homes in the rural farming village were barely standing and many had shifted from their foundations. Roofs were missing. Metal siding from barns was wrapped around trees.

"It's the worst thing I've seen," said Dekalb County Sheriff Roger Scott. "It's obviously distressing and our hearts go out to the families."

Residents gathered at a roadblock a mile from town Friday morning, eager to check the damage to their homes. Police, though, refused entry, saying it was too dangerous.

Resident Al Zammuto, a 60-year-old machinist, said he and other residents received cellphone alerts at 6:45 p.m., but he dismissed it as previous warnings hadn't amounted to anything.

Then his windows exploded.

He took cover as the severe weather struck. Bricks were torn off the side of his home. Minutes later he stepped outside and couldn't believe his eyes. He said the town looked trashed "looked like a landfill" and the sounds were haunting.

National Weather Service meteorologist Matt Friedlein said at least two tornadoes swept through six north-central Illinois counties, and that damage survey teams would visit the area to determine how long they stayed on the ground, their strength and the extent of the damage.

After raking Illinois, Thursday's storm and cold front headed northeast, dumping snow in Michigan's Upper Peninsula and sweeping across the Ohio Valley overnight, Friedlein said. The system was headed into the Appalachian region Friday with the potential for severe thunderstorms but "not anywhere near the threat" that it packed in the Midwest, he said.

Roughly 30 homes were damaged or destroyed in Ogle County, adjacent to DeKalb, Sheriff Brian VanVickle said, adding no deaths or significant injuries were reported there. He said 12 people had been trapped in the storm cellar beneath a restaurant that collapsed in the storm in Rochelle, about 20 miles southwest of Fairdale.

One of those rescued from the Grubsteakers restaurant, Raymond Kramer, 81, told Chicago's WLS-TV they were trapped for 90 minutes before emergency crews were able to rescue them, unscathed.

"No sooner did we get down there, when it hit the building and laid a whole metal wall on top of the doors where we went into the storm cellar," Kramer said. "When the tornado hit, we all got a dust bath. Everyone in there got shattered with dust and debris falling out of the rafters."