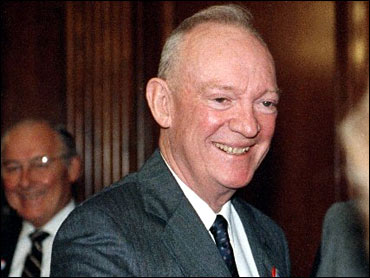 In a rare public statement, John Eisenhower - son of Republican President Dwight D. "Ike" Eisenhower - has announced that he is going to vote for Democratic Sen. John Kerry for president on Nov. 2.

Ike's son isn't the only presidential offspring to stay off the GOP bandwagon this year - one in which the father and son theme is never entirely absent, with President George W. Bush himself being the son of former president George H. W. Bush.

The Democrats scored a coup last summer when Ron Reagan, the late president's youngest son, addressed the Democratic convention on behalf of stem cell research. Reagan, 46, lambasted President Bush in interviews he gave around the same time - accusing the Bush administration of lying its way into the Iraq war and vowing he'd support anyone who could beat President Bush.

Eisenhower, 82, a former U.S. ambassador to Belgium and an author, used an opinion column published Tuesday in The Union Leader of Manchester, N.H. to express his own views on Campaign 2004.

Eisenhower explains that after 50 years as a Republican, he has lost confidence in the GOP and has switched his party affiliation to Independent.

"There are times when we must break with the past, and I believe this is one of them," Eisenhower wrote, going on to criticize President Bush and the GOP for federal budget deficits, for "unilaterally" invading Iraq and for infringing on personal liberties.

Eisenhower declined to be interviewed Wednesday. His wife, Joanne Eisenhower, said by telephone from their home on Maryland's Eastern Shore that, "This is something he felt strongly about."

"The fact is that today's 'Republican' Party is one with which I am totally unfamiliar. To me, the word 'Republican' has always been synonymous with the word 'responsibility,' which has meant limiting our governmental obligations to those we can afford in human and financial terms.

"Today's whopping budget deficit of some $440 billion does not meet that criterion," Eisenhower wrote.

Eisenhower says he was a registered Republican until the Bush administration's decision to invade Iraq "as a maverick."

"Recent developments indicate that the current Republican Party leadership has confused confident leadership with hubris and arrogance," he wrote.

Eisenhower scolded the Republican leadership for embracing a tax code that "heads us in the direction of a society of very rich and very poor."

"Senator Kerry, in whom I am willing to place my trust, has demonstrated that he is courageous, sober, competent, and concerned with fighting the dangers associated with the widening socio-economic gap in this country," he concluded.