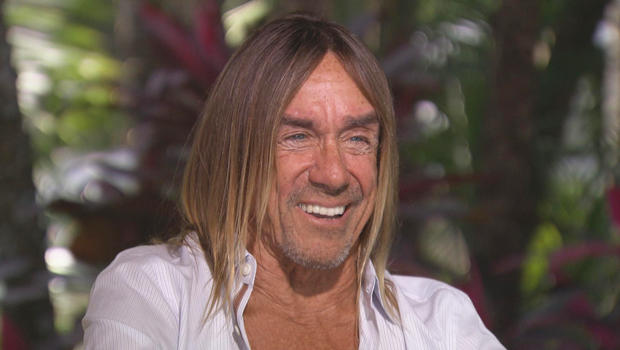 “Candy” was a big hit back in 1990 for the pop star known as Iggy Pop. All these years later he’s still on stage and back on the charts -- and talking to Anthony Mason For The Record:

On stage, Iggy Pop has always lived on the edge. He’s a rock provocateur, a restless and reckless front man who has excited and offended: “I’m still not sure what the civilized world wants to do about me,” he laughed. “I’m not sure what their intentions are.”

With his latest album, “Post Pop Depression,” the artist often called “the godfather of punk” has made a belated bid for respectability:

“There have been plenty of naysayers in my life and career since I started. And I wanted to say, ‘I can succeed at this.’”

He has. His highest-charting album ever, “Post Pop Depression” is nominated for a Grammy -- and he’s the subject of a new documentary, “Gimme Danger,” which shows how he invented the stage dive.

To listen to Iggy Pop perform “Sunday” from “Post Pop Depression” click on the video player below.

“I thought you’d given up stage diving?” Mason asked.

“Well, I gave it up here (points to his head) but not here (to his heart). You wanna connect. And granted it’s a very fundamental way to connect, but it’s a connection that I found in my life.”

As eloquent as Iggy is in person, on stage he’s a blunt instrument -- the out-of-control alter-ego of Jim Osterberg.

“I don’t know how that works. I haven’t got a clue. Somethin’ happens,” he said.

“What do you get back in that connection?”

James Osterberg, Jr. grew up in a trailer park in Ypsilanti, Michigan, with parents he called “exemplary.”

At Tappan Junior High, he was voted most likely to succeed.

Mason said, “You wrote in your friend’s yearbook you were going to be the 43rd President of the United States.”

“I was interested in politics,” Iggy said. “I went door to door for Kennedy. But between then and later, music seduced me.”

The name “Iggy” came from his first band, The Iguanas. In the late sixties, he formed The Stooges -- and his alter-ego, the dangerous frontman known to roll around on broken glass, was born.

He admits he put himself at physical risk fairly routinely. “Yeah, yeah. I did.”

And what was that about? “I think once you start something, if you’re me, you need to finish it.”

It was mixed by David Bowie, whom he’d met in a bar. Appearing with Iggy on “The Dinah Shore Show” in 1977, Bowie described their different sounds: “Mine comes from up there (points to his head), and Jimmy’s comes from down there (points below the waist).”

Bowie played keyboards behind Iggy on tour that year.

Iggy told Mason, “He was nicer to me than he had to be. That is a super rare thing with a HIG.”

Bowie would collaborate with Iggy on more than three albums of material, including “China Girl.”

To hear Iggy Pop perform “China Girl” click on the video player below.

He also took up painting, because Bowie had, too. His works hangs in his Miami bungalow.

“This represents my inflamed soul,” he said of one painting. “And these are the little devils whispering bad suggestions in my ear.”

Through much of the seventies, as he moved between Detroit, L.A. and New York, the devil Iggy battled was heroin. It landed him in UCLA’s Neuropsychiatric Institute. He’d checked himself in, he said, because “I’d become a prisoner of my own theatricality.”

It took time, but he turned it around.

“I lived a very straight life with a crooked mind,” he laughed.

“Can you live a straight life with a crooked mind?” Mason asked.

And by the late ‘90s, he’d moved to Miami. “This is where I’d prefer to be all the time, just about every day.”

His music was featured prominently in the film “Trainspotting.”

To view a clip from “Trainspotting” featuring Iggy Pop’s “Lust for Life” (and some very NSFW language), click on the video player below:

Mason asked, “Are you conscious of the influence of your band?”

“I have a feeling that I’ve had some sort of minor spiritual influence,” he said. “I went to the Fillmore in Ne wYork, and there were four guys on stage with no shirt on and they all looked like me. And it was the Red Hot Chili Peppers! And I thought, ‘Oh, boy, how do I compete with that?’”

Mason said to Josh Homme, who produced and co-wrote Iggy’s new album, “There aren’t a lot of Iggys left.”

“Well, there’s Iggy, and there’s ...” Homme tried to reply. “I look at Iggy as this kind of colorful piece of art. He has this grizzled beauty about his perspective and his persona, his body and his experience.”

But Iggy Pop says this album is likely his last.

Jimmy Osterberg is ready to slow down, now that the world seems to have caught up to his alter-ego.

“This century’s been a fresh start for me,” he said. “And the skies cleared. Everything that wouldn’t work suddenly started to work.”

“Why do you think that happened?”

“I don’t know. The simplest thing I would think is that maybe society and I met halfway!”