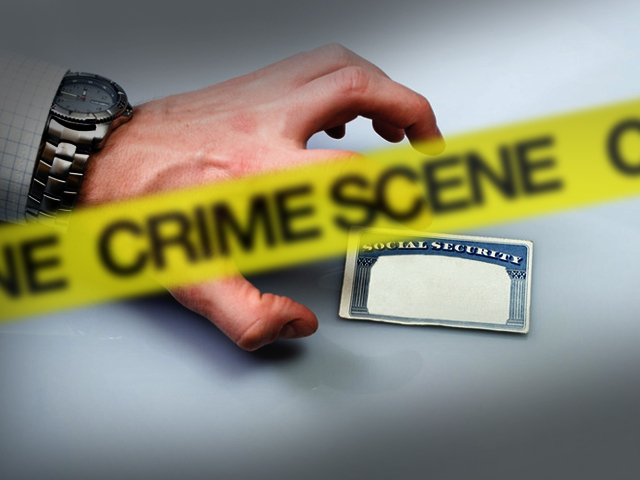 When Chief Richard Beary, the head of the University of Central Florida's police department, discovered he was the victim of identity theft, he did something few people attempt: he tracked down the woman who stole his credit card.

Beary told CBS News' Crimesider that right after he bought a new phone at a local AT&T store last year -- and submitted to a credit check -- someone charged $1,500 on his credit card at a hotel near Disney World.

When confronted by a bogus charge on their account, most people call their bank or credit card company, cancel the card, and, usually, get a refund. What they don't do is file a police report.

"Most people will just let it go," Beary says.

And because they "let it go," there is no record that a crime was ever committed. No police report, no investigation, no hope of catching the person who stole their identity. Meaning, says Beary, that many of the people who commit identity theft are repeat offenders. In fact, he told Crimesider that the woman who stole his credit card number had previously been jailed for a similar crime -- but still managed to get a job doing credit checks at a Florida AT&T store.

And as identity thieves get more creative and technologically savvy, the consequences can be a lot more damaging than just a few charges on a credit card.

A recent survey by the Bureau of Justice Statistics found that in 2012 alone, more than 16 million Americans -- seven percent of the population over the age of 16 -- reported being victims of identity theft: 15.3 million had credit card or bank information stolen; 1.1 million had bogus accounts opened in their name; and more than 800,000 fell victim to other kinds of schemes, including horror stories like thieves buying cars, opening businesses, committing crimes, running up hospital bills or getting tax refunds in their names.

In 2012, the losses totaled more than $24.7 billion. That's $10 billion more than the losses from all other property crimes.

As Beary puts it, "Crime isn't going down, it's changing."

And law enforcement is having a hard time keeping up. While part of the problem is that most people don't file police reports when they've been victimized, Beary says that victims aren't always to blame. If you've been refunded the money lost by your bank or credit card company, Beary says that sometimes law enforcement agencies won't take your report because they see the bank as the technical victim.

Jurisdiction also poses a challenge. If you live in Florida and your credit card was used in New York City, the local police aren't likely to send a detective up north to investigate. And even if they do, Beary says that because the crime is non-violent and not drug-related, ID thieves know that prison time is unlikely.

There have, however, been some successful prosecutions, particularly in the area of defrauding the IRS. Last year, Florida residents Maurice J. Larry and Rashia Wilson were sentenced to 14 and 19 years in prison, respectively, for using stolen social security numbers and other identifying information to file false tax returns and collect more than $2 million in refunds. And in Alabama, state employee Lea'Tice Phillips got more than seven years in September 2013 for stealing social security numbers from state databases and using them to file more than 1,000 false tax returns and collect $1.7 million in refunds.

"These thieves monetize our data and identity in ways that are so creative," says Eva Velasquez, president and CEO of the non-profit Identity Theft Resource Center. "They came up with this game and it took a while for the IRS to catch up."

Police are also playing catch-up when it comes to the so-called Dark Web or Deep Web, which Marie-Helen Maras, the author of "Computer Forensics: Cybercriminals, Laws and Evidence," describes as difficult-to-access online forums where people buy and sell illicit information like stolen social security numbers. The results for the victim, she says, can be devastating.

"This isn't something that can be fixed, your information is out there," says Maras, an associate professor at John Jay College of Criminal Justice in New York City. "One person may purchase it or multiple individuals may purchase it."

And, says Maras, even if police trace an illegal data purchase, a conviction can be difficult to secure because a thief can claim that he or she was not the one sitting in front of the computer when the stolen information was downloaded.

Yet another way ID thieves can wreak havoc with your life is by stealing your identity and using it to commit crimes. Velasquez told Crimesider that people have called her Identity Theft Resource Center hotline for help after applying for a job and failing a background test because there is an arrest record in their name.

"If police have a warrant with your name on it, you're going to get booked," says Florida's Beary. "You have to prove it wasn't you who committed the crime."

According to a 2006 Federal Trade Commission report, five percent of identity theft victims said their name and information was given to police when the thief was stopped or charged with a crime.

Next year, Beary will become the president of the International Association of Chiefs of Police, and he plans to make identity theft a top priority -- specifically, by creating a database that would record reports of the crime.

"It's a huge issue that nobody really wants to tackle," says Beary. "We need to get our arms around it -- find out how big the problem is. As a country, we're just leaking like a sieve. We've got money being stolen from us and nobody's paying attention."

Jennifer Leach, a consumer education specialist with the Federal Trade Commission, talks to CBS News Reporter Paula Reid about keeping your identity and your money safe during the holiday season
More
Julia Dahl