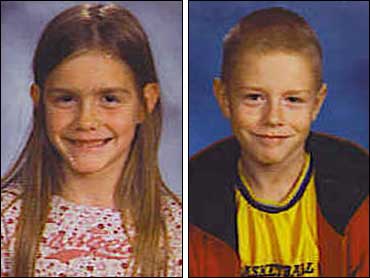 Preliminary DNA tests showed no traces of the blood of two missing children in the home where three other people were slain, raising hopes that Dylan and Shasta Groene are still alive, officials said Thursday.

Only the blood of the three murder victims — the missing children's mother and older brother and the mother's boyfriend — was found at the scene, according to initial analysis by the FBI.

"There is no indication that any of the blood is from the children," Kootenai County Sheriff's Capt. Ben Wolfinger said. "It bolsters our feeling the children are alive and we'll recover them and bring them home."

"We are not looking for bodies," he added.

Dylan, 9, and Shasta, 8, have been missing since the three bodies were discovered in the rural home on May 16. Investigators believe the children were in the house as the victims were bound and bludgeoned, and may have been abducted by the killers.

Officers Thursday began searching a landfill about 10 miles south of Coeur d'Alene for evidence, such as a weapon, tool, or bloody clothing that may have been discarded in large metal trash bins near the Groene home, Wolfinger said. He said the search might take five to 10 days.

The trash bins were checked the morning after the bodies were found inside the home, and since then the dump's operator has isolated daily trash pickups from the area, he said.

The FBI has placed a high priority on the case and has been rushing the processing of evidence from the home, located eight miles east of Coeur d'Alene. More results were expected Friday, Wolfinger said.

Authorities still do not have a suspect or motive for the crimes, and have said they have no idea where the children are. But they are convinced the missing children were home at the time of the slayings.

"We've never thought anything else," Wolfinger said. "These are 8- and 9-year-olds. You don't let them out by themselves."

A public memorial service was held Wednesday for the children's mother, Brenda Groene, 40, and their 13-year-old brother Slade. The other person killed was Brenda Groene's boyfriend, Mark McKenzie, 37, who will have a private service.

Kootenai County Sheriff Rocky Watson has speculated there was more than one killer because all the victims were bound. Officers also suspect the killer or killers were known to the victims, because there was no sign of forced entry.

The children's father and Brenda Groene's ex-husband, Steven Groene, 48, is not considered a suspect in the case, sheriff's investigators have said.

Because the home was close to Interstate 90, just west of a pass in the Rocky Mountains, investigators have said it is possible a motorist committed the crimes at random and then jumped onto the highway heading toward Montana or Seattle.