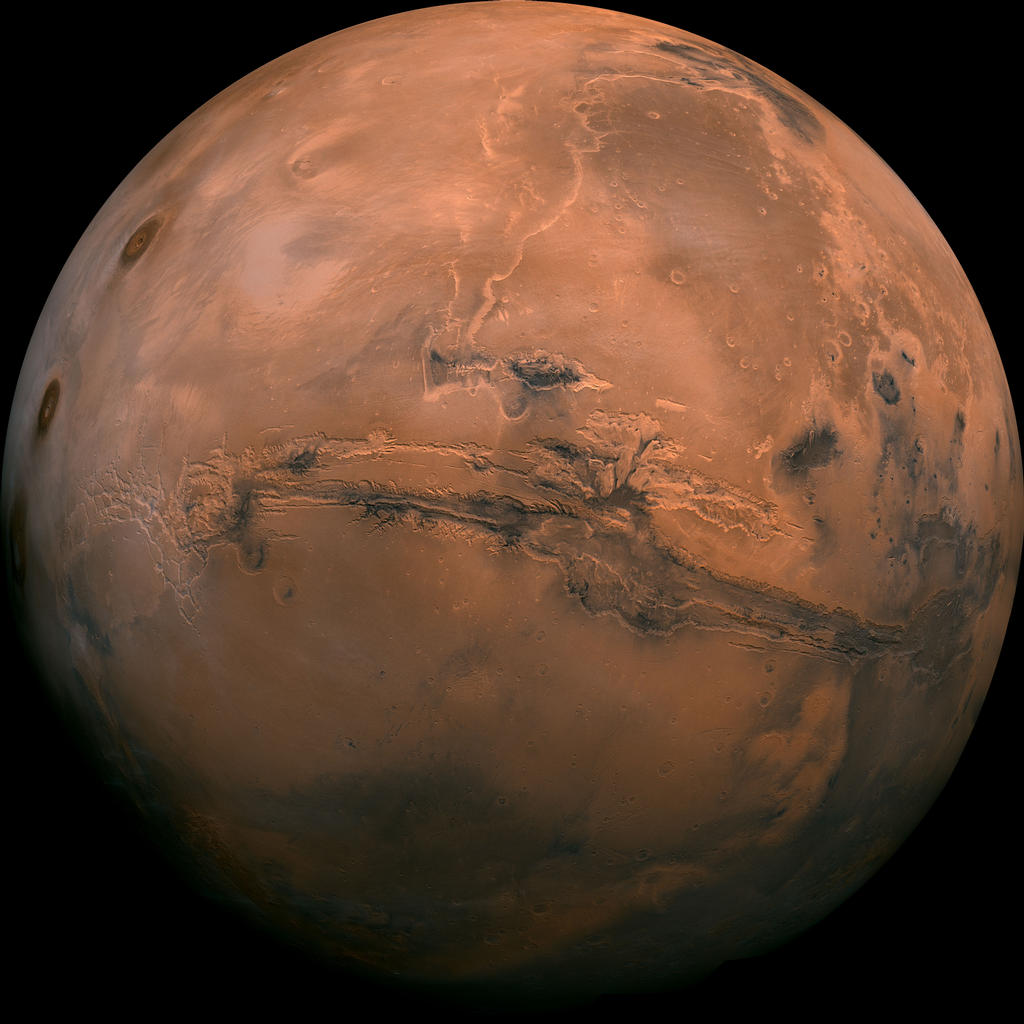 Ali Bramson knew she was onto something when she spotted a "crazy looking crater" on the face of Mars.

Trying to explain the crater's strange shape, Bramson, a graduate student in the University of Arizona's Lunar and Planetary Laboratory (LPL), and her colleagues zeroed in on the fact it was terraced, rather than bowl-shaped like most craters of this size.

Terraces can form when there are layers of different materials in the planet's subsurface, such as dirt, ice or rock.

"It's worth mentioning that terraced craters of this size are quite rare," said Shane Byrne, an associate professor in LPL and a co-author with Bramson and several others on a paper about the discovery published this week in Geophysical Research Letters,a journal of the American Geophysical Union.

"But in this area of Mars (Arcadia Planitia), there are a lot of terraced craters," he said. "The craters may have formed at different times, but they all have terraces, which indicates something weird is going on in the subsurface."

In this case, there was ice - and lots of it. Beneath the surface, they discovered an enormous slab of water ice, measuring 130 feet thick and covering an area equivalent to that of California and Texas combined. The ice was the result, the authors wrote, of snowfall "which can most easily explain the thickness and widespread nature of the excess ice observed."

To locate the ice, the researchers turned to the Mars Reconnaissance Orbiter's High Resolution Imaging Science Experiment operated out of LPL.

By combining the two data sets, Bramson and her colleagues were able to determine that beneath the dirt surface, or regolith, was ice that was as much as 40 meters (131 feet) thick.

"This slab of ice right beneath the surface has been preserved for the last 10s of millions of years and is a remnant from a past climate since water ice isn't stable at the surface of Mars at this location today," Bramson told CBS News.

"It has undergone many periods where ice would be very unstable at these latitudes, and we would expect ice to sublimate away during those periods," she continued. "Therefore, this discovery will allow us to look into the conditions necessary for the ice's long-term preservation. It will also inform us about what the Martian climate was like 10s of millions of years ago when it formed - that there was likely a lot of snowfall to build up a layer of ice this thick."

It wasn't a complete surprise to find the ice, given that the changing climate on Mars has produced several ice ages. In earlier research, ice has been discovered at its poles, and a study earlier this year found that glaciers buried beneath the surface have enough water to cover the entire planet.

But Bramson and her colleagues were taken aback to find ice at the planet's mid-latitudes, analogous to earthly latitudes falling between the Canadian-U.S. border and Kansas, is something new.

"Knowing where the ice is and how thick it is can tell you about Mars' past climates," Byrne said in a university press release. "The fact that the ice is so thick and widespread leads us to think it came into place during one of Mars' past climates when it snowed a bunch, ice accumulated, was buried, and then preserved."

But Byrne said a key question is why the ice hasn't disappeared.

"There have been a lot of climate changes between now and the tens of millions of years ago when we suspect the ice was put there. But it shouldn't be stable today, and other past climates of ice instability in this region mean the ice should've sublimated away into the dry Martian atmosphere by now," he said.

"So, that's what we need to investigate," he wondered. "What kept the ice around all this time? There's no climate model that we have now that explains this."