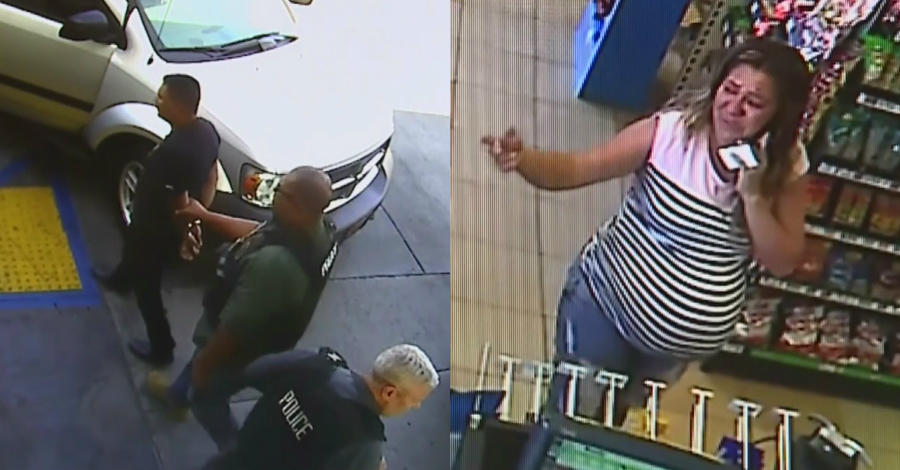 STUDIO CITY, Calif. — The wife and lawyer of the man whose arrest by immigration agents last week made headlines around the country say the whole ordeal might have been caused by a case of mistaken identity, CBS Los Angeles reports. Security video obtained by CBS Los Angeles last week shows officers with Immigration and Customs Enforcement detaining Joel Arrona-Lara at a San Bernardino gas station while he was driving his wife to a scheduled Cesarean section.

Just after she had delivered her baby boy, Venegas told CBS Los Angeles that her husband had never been in trouble with the law, not having even received a ticket. On Friday, ICE issued a statement saying Arrona-Lara was arrested for "illegally residing in the United States" by the agency's "Fugitive Operations Team" and was awaiting removal.

"I feel very bad right now," Venegas told CBS Los Angeles in Spanish at the hospital as she held her baby boy. "My husband needs to be here. He had to wait for his son for so long, and someone just took him away."

On Saturday, ICE said Arrona-Lara had, in fact, been targeted because he is wanted on an outstanding homicide warrant in Mexico, a detail that was not included in the original statement.

His attorney told CBS Los Angeles he is not aware of any such warrant and has been unable to confirm it from the Mexican consulate.

"So far, we haven't been able to verify anything," Emilio Amaya Garcia told CBS News Sunday. He added that as far he knows, Arrona-Lara is being held for removal, not on an extradition order. He said he hopes to get some clarification Monday once the consulate opens.

Garcia and Venegas believe that authorities might have mistaken Arrona-Lara for his brother, who she says has done jail time in Mexico. She admitted she and her husband are in the United States without green cards, and that he has been in the country for 12 years. The couple have five children.

Whether the warrant turns out to be real or not, Garcia told CBS the way Venegas was left alone was wrong.

"For us, the issue is not so much the arrest, but the fact that ICE acted in total disregard for health and the well-being of the mother," said Garcia.

Garcia said he is hoping a judge will grant his client bail.