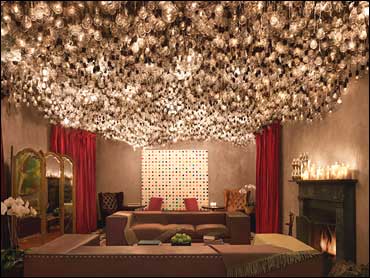 If you have the chance to enter the lobby of New York's Gramercy Park Hotel with Ian Schrager, he'll show off the furniture designed by artist Julian Schnabel and the imposing chandelier imported from Venice.

As the inventor of the 'hip hotel,' Schrager revolutionized the industry, and with his newest creation, he has tried to outdo himself.

"I'm a home run hitter," he told CBS News business correspondent Anthony Mason. "I don't hit singles. I wanna really wow the customer, overwhelm the customer. I wanna really take their breath away. That's what really makes me get up in the morning."

In his edgy, high style hotels, including the Delano in Miami Beach, the Sanderson in London and the Mondrian in West Hollywood, Schrager has strived to break the rules.

"My goal is not just to provide a bed for people to sleep in, because if that were it I couldn't out-do Marriott," he said. "I could not execute better than they can execute."

To Schrager, building a hotel is like producing a show. He sees himself as an entertainer.

The son of a garment worker from Brooklyn, Schrager has had some stunning rises and falls, beginning in the 1970s when, with his business partner and best friend Steve Rubell, he opened a disco called Studio 54. Record executive David Geffen once said "Ian would like to forget Studio 54, but the world won't let him." Schrager says that is true.

"You know, I have as many bad memories from that as I do good memories," Schrager said. "It was really the first business that I was ever in. It was like holding onto a lightning bolt. And it almost destroyed us."

It became the Mecca of New York nightlife – a magnet for the glitterati. In 1978, the police busted up the party. Charged with tax evasion, Rubell and Schrager spent more than a year in prison.

"You know, I still have the scar from it," Schrager said. "It's healed but I still have a scar from it. I don't love the fact that I have to sort of explain that to my children. It's the baggage that comes with it that reawakens feelings of what Steve and I went through — the rock bottom we hit. And having to crawl out of a hole, not even be able to get a checking account, a driver's license or credit card."

Rubell and Schrager reinvented themselves with their first hotel, Morgan's. In 1989, just as their business was really taking off, Rubell — who had always been the front man — died of AIDS. Schrager had to step out of the shadows.

He still considers himself an outsider. At cocktail parties, he heads for the corner.

"And I enjoy when they have it at a place I built, more than being in the party and shaking hands and taking bows and smiling at everybody," he said. "That's the difference. I'm not sure that's the right way, by the way."

He has no formal architectural or design training, but architect Anda Andrei, who's worked with him for more than 20 years, says he has a natural instinct.

"It comes from the soul," Andrei said. "It's like an instant reaction. The way you look at a painting, you know you love it or you don't love it. And he has that instinct in him. It's amazing, actually."

"If I bring anything to the table, it's that sort of sensitivity to what's in the air," Schrager said. "I sort of feel and see things maybe other people can't see. It's a gift. It's not a logical thing. It's just instinctive. I have to trust my gut. It's served me well. I'm ready to rise and fall, you know, with my judgments based on my instincts."

But his name is now synonymous with style, and his brand of boutique hotels has been widely imitated.

"I find it annoying, not flattering. You know why? Because an idea to me is like a child," he said. "It's my idea, When I see somebody take it I really don't like it."

With the Gramercy Park Hotel, Schrager has reinvented himself yet again, rebelling against the sleek modern designs his competitors had copied, moving he says from minimalist to maximalist. Once again, critics and the public have approved.

"But I've never not had that," he said. I don't even know what I'd do if that happened to me. I would probably be devastated — matter of life and death."

At 60, divorced with two daughters, Schrager is as intense as ever. He's planning apartments in New York, hotels in Miami, and projects in Las Vegas: The home run hitter still swinging for the fences.