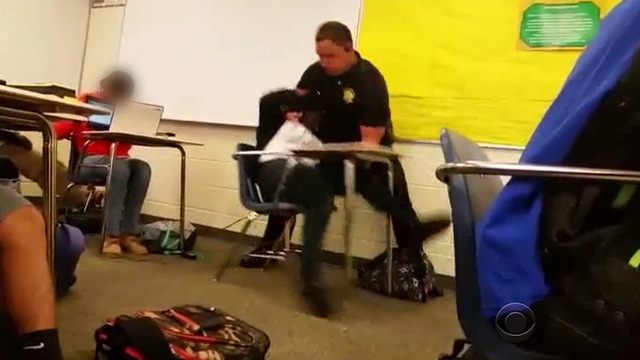 The Justice Department is investigating whether Deputy Ben Fields, a senior deputy with the Richland County, South Carolina Sheriff's Office, violated the civil rights of a female high school senior during a violent arrest.

The confrontation started just after 10:30 a.m. when a female student repeatedly refused requests by her teacher and assistant principal to put away her cell phone during class.

That's when the administrator called in Deputy Fields.

Eighteen-year-old Niya Kenny was in the same class. When she protested the officer's behavoir, she was arrested too.

"I was praying out loud for the girl and I just, I couldn't believe it was happening," said Kenny. "I was just crying, and he was like, well since you've got so much to say you're coming too."

Another student, 15-year-old Aaron Johnson, was sitting a few desks away. "It seemed really violent. It was really, really hard to watch."

"It is essential that our staff understand the proper protocol, clearly something did not go right in this classroom," said Hamm.

Deputy Fields was put on administrative leave. A ten-year department veteran, he became a school resource officer in 2008, part of a community effort to forge better relations between law enforcement and schools.

He was even honored by the district last year, but court records show Fields has been accused of excessive behavior three times. A jury ruled in his favor in a 2005 case, a 2006 case was dismissed and a case accusing him of racially profiling a student is set for trial in January.

"If she had not disrupted the school, and disrupted that class, we would not be standing here today," said Lott. "So it started with her and ended with my deputy, and I'm going to deal with what my deputy did."

Texas shooting survivor says her stepbrother, who died, wanted to be a police officer
Thanks for reading CBS NEWS.
Create your free account or log in
for more features.
View CBS News In
CBS News App Open
Chrome Safari Continue
Be the first to know
Get browser notifications for breaking news, live events, and exclusive reporting.