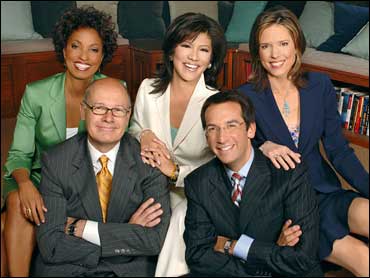 On Tuesday, June 8, The Early Show kicks off a week-long series called, "I Always Wanted To..."

Syler recently overcame her fears and performed at New York City's Stand-Up New York comedy club. "I feel like everybody needs a creative outlet, and for 41 years, I've been searching for mine," says Syler. "There was a part of me that was fearful of this for a long time. It's one thing to crack one-liners, but it's a whole other thing to do a two- or three-minute set on stage."

Wednesday, June 9: Harry Smith's father was a part-time police officer in his small hometown outside of Chicago, so he always thought about becoming a cop.

Smith recently spent a day with the New York Police Department and, during the ride-along, witnessed the search and rescue of an 8-year-old who disappeared in front of Trump Tower in New York City. After witnessing this story's happy ending, Smith says, "If, in another life I had the opportunity to wear this hat (NYPD), I would trade my life in a second."

Thursday, June 10: Like many kids, when she was growing up, Julie Chen loved nothing more than Saturday morning cartoons and says she was "obsessed with the Smurfs." Chen has always pondered the idea of lending her voice to an animated show, and she talks about her experience playing a part in Nickelodeon's "The Fairly Odd Parents."

Monday, June 14: Hannah Storm discusses how her acting dream came true with a role on CBS' "As The World Turns."

After a career in sports broadcasting and, now at CBS News, Storm says that "one of the things I've always wanted to do is be an actress and not play myself, but play another part." In an episode airing next month, Storm plays wedding planner Tiffany Gable, who gets caught up in a feud between the two mothers of a betrothed young couple.