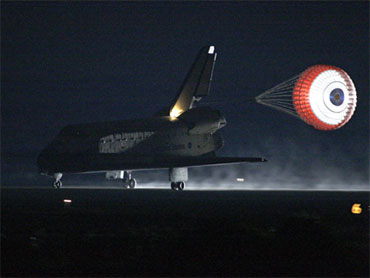 Last week, The Early Show started a special series in which each of the anchors had the opportunity to do something he or she always wanted to do.

On Monday, Hannah Storm closes out the series with her wish. The following is her report:

I always wanted to be an actress and, thanks to our friends at "As The World Turns," I recently taped my first-ever soap opera appearance. While we don't want to give away any major plotlines, here's a behind-the-scenes look.

When I was a little kid I would put on shows for my parents, and I would write little musicals and plays, so from a really, really young age, I was always performing. I even was the mascot at my high school because I liked being in front of people.

I've had the opportunity to act as an adult, but I always played myself and myself as a sportscaster. I was in the initial show of "Arliss," which was about a sports agent. And then I was in a movie that a lot of people have seen called, "Like Mike."

And so, both times I played Hannah Storm, which was you know, I got to say it's pretty easy.

One of the things I've always wanted to do is be an actress and not play myself, but play another part. So here I am, a wedding planner.

That's right, I snagged a guest appearance as wedding planner Tiffany Gable on CBS' "As The World Turns."

Stewart says he always gets nervous, but notes, "They're good if you can channel them into something positive." Reading Storm's copy, he says, "There's some comedy in here so find the humor. Humor is great. Use everything from you that you can."

So now is my chance at soap opera stardom. Wish me luck.

My two-day stint at "As The World Turns" began with rehearsal and blocking by director and executive producer Chris Goutman. Next, there's a chance to get to know the cast, a few final wardrobe decisions, and I was ready to go.

The following is a portion of the script:

Kim: I've brought along a surprise guest. Tiffany Gable? I'd like you to meet…

Storm as Tiffany: Don't tell me, mother of the bride, which means you must be the bride-to-be; this is going to be the most magical time.

Alison: Whoa, hold on a minute, she's not the bride-to-be, I am.
Storm as Tiffany: Oh, I'm so sorry, usually my radar is usually great on these things.

You don't want to slow up their day. You don't want to completely embarrass yourself. It's the whole thing of being an amateur and walking in and working with the best in the business that, I think, is intimidating.

Storm as Tiffany: Here's a sample budget I'd like you to look at. Just the basics: invitations, flowers, caterer, gowns, photographer, videographer. Take a look at that and let me know what you think and I'll be right back.

It's not long before Tiffany realizes she's got two monstrous moms on her hands. She sort of gets caught in the crossfire. And basically, she is throwing her hands up. You know, "What did I get myself into? Why am I here? And what is up with these people?"

Alison: You're a wedding planner. You're supposed to be able to handle this.

Storm as Tiffany: No wedding planner on earth could wrangle these two; you'd need a chair and a whip. Take my advice, get out now.

With a little editing and some music, my episodes will be complete and will air in mid-July.

Goutman says, "I think that Hannah Storm does have a future in television and we've discovered it today. If she's not needed on The Early Show she can come over and be with us, OK?"

You know, there are so many nuptials on soap operas these days, weddings are off and then back on again. Characters get married two, three, four times. I think Tiffany Gable's services might be needed again.

If so, you know where to find me, and be sure to watch "As The World Turns" on July 12 and 13 for my complete scenes.