"We've heard good things, we've come to see for ourselves," she said.

The new 2011 Sonata was selling so well, Dawn Webster had to put herself on a waiting list for one.

And then there's the price. Hyundai's strategy . . . sell more car for less . . . than the competition.

"You can't explain what that feeling is, to have your first car and say 'This belongs to me,' you know?"

"And how does it look to you?" asked Teichner.

To say that Hyundai is on a roll and in a hurry is an understatement. While the rest of the auto industry was in freefall, off more than 20% last year, Hyundai's U.S. sales were up 8 percent. Hyundai blew past Ford and became the world's number 4 car maker.

"I would say, right now, Hyundai has the hot hand," said Michael Brown, vice president of Atlantic Hyundai's parent company, a dealership network that includes most of the major brands.

"Hyundai really, really raised their game," he said. "They decided that they were going to be in this marketplace and they did not just want to compete; they wanted to try and dominate."

John Krafcik is president and CEO of Hyundai Motor America.

"Around the year 2000, our chairman challenged the company to go ahead and achieve the top level of quality in the industry and to do it in five years," he told Teichner as he took her for a spin.

Hyundai has made a quantum leap in quality. Its new models are well-equipped, fuel efficient and, now, stylish. 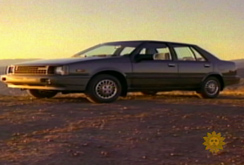 "Well, it was a piece of junk in a competitive market like the U.S.," said James Bell.

Bell analyzes the auto industry for the car buyer's directory, Kelley Blue Book. He watched Hyundai recover from all the bad jokes.

"They basically retrenched, and then came back stronger, addressed their reliability and durability concerns with their ten-year, 100,000-mile warranty, which was a good, bold move," he said.

That got the public's attention. Hyundai set out to do it again in 2009. It saw opportunity in the recession. In commercials voiced by actor Jeff Bridges, Hyundai told its customers they could return their cars if their lost their job.

Not even 100 cars have been returned, but the offer raised Hyundai's profile. A blitz of ads (count 'em, nine) during this year's Super Bowl Sunday programming showed the transformed Hyundai to more than 100 million Americans . . . just when Toyota's woes were reaching critical mass.

Good for Hyundai, according to Dave Zuchowski, vice president of national sales for Hyundai Motor America. But he sees a cautionary tale here, too. On Wednesday Hyundai announced a voluntary recall of 1300 new Sonatas in the U.S. because of a possible door latch problem.

"Toyota grew very quickly and expanded very quickly, and Hyundai is busy doing exactly the same thing with the Toyota production model as its benchmark," Teichner said. "Do you ever worry that this could ever happen to Hyundai?"

"Absolutely," said Zuchowski. "We are all about speed. We are a very, very ambitious company, and we have huge growth plans and have for the last several years. So it has been a wakeup call for us, and I think for the rest of the industry." 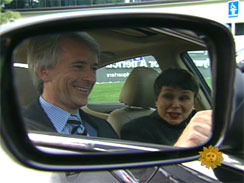 (CBS)
Krafcik gave Teichner a sneak peek at the Equus. "This is our new flagship," he said.

The super-luxurious Equus, due out sometime this fall, is intended to be the next chapter in Hyundai's success story.

"Yours will not cost that much?

"We stand for something different," Krafcik said.

Should all those prestige names be worried, based on the Korean company's track record? Yes. But here's the irony . . .

Another generation of upstarts . . . something Hyundai knows about.