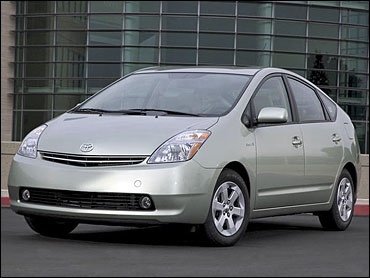 Registrations for new hybrids rose to 199,148 in 2005, a 139 percent increase from the year before, as more models came on the market, according to R.L. Polk & Co., a Southfield, Mich.-based firm that collects and interprets automotive data. The Lexus RX400h and hybrid versions of the Toyota Highlander and Mercury Mariner were among the new models from which consumers had to choose.

R.L. Polk analyst Lonnie Miller predicted last year that hybrids would make up 30 to 35 percent of the U.S. market by 2015. But Miller now says that forecast was aggressive.

Miller said gas-electric hybrids, which combine gas engines with electric batteries, still are a technology in their infancy and aren't fully understood by mainstream consumers. Their main buyers continue to be people who want to make a feel-good statement, he said.

When gas prices rise, Miller said, as many as 80 percent of buyers say they'll consider hybrids, but many bypass them because they can cost $3,000 to $4,000 more than their gas-powered counterparts. Tax credits and perks, such as allowing hybrid drivers to use high-occupancy lanes in California and Virginia, can help bring down the cost, but U.S. buyers remain very conservative on adopting new technology.

Miller said the hybrid Toyota Camry, which will come out this summer, could be the vehicle that finally shows whether hybrids will join the mainstream. The gas-powered version of the Camry is a perennial U.S. best seller.

"The Camry is the sweetheart of the midsize car segment," Miller said. "If it can break through, hybrids may be more widely adopted."

Toyota Motor Corp. and its Lexus luxury division already accounted for seven out of 10 hybrid sales in 2005, between the top-selling Toyota Prius, at 53 percent of all U.S. hybrid sales, and the Lexus RX400h crossover, at 9.7 percent.

Ford Motor Co. accounted for the lowest percentage, with its Ford Escape hybrid making up 7.6 percent of hybrid sales and the Mercury Mariner hybrid making up less than 1 percent. Ford is aiming to turn that around with a zero-percent financing offer rolled out nationwide in April.

The plan could be working. Ford said Tuesday that its hybrid sales were up 68 percent over last April, and it plans to keep the incentives in effect through July 1.

Ford is pressing ahead with other technologies, including ethanol-powered vehicles. Ford, General Motors Corp. and DaimlerChrysler AG's Chrysler Group all have recently announced plans to increase their ethanol offerings and educate consumers about the technology.

Hybrids have the advantage over ethanol right now because ethanol isn't widely available, Miller said, but that could change.