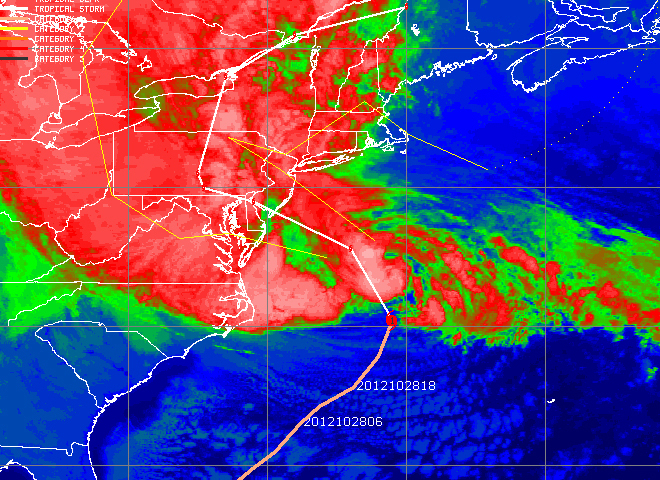 NEW YORK Hurricane Sandy grounded thousands of flights in the U.S. northeast Monday and upended travel plans across the globe, stranding passengers from Hong Kong to Europe. The massive storm threatens to bring a near halt to air travel for at least two days in a key region for both domestic and international flights.

Major carriers such as American Airlines, United and Delta cancelled all flights into and out of three area airports in New York, the nation's busiest airspace.

According to the flight-tracking service FlightAware, nearly 10,000 flights had been canceled for Monday and Tuesday, almost all related to the storm.

About one-quarter of all U.S. flights travel in or out of New York airports each day. So cancellations here can dramatically impact travel in other cities.

CBS News travel editor Peter Greenberg said that any time you have that volume of flight cancellations, "it's going to take the airlines anywhere from 36 to 48 hours, per day, that they are down" to make up for the disruption.

"Even though the airlines are saying you can rebook your flights and fly before November 4, even that number is sliding now," Greenberg told "CBS This Morning." "They're going to move that back to November 7. Many airlines are doing that because they simply can't handle the capacity of accommodating all those people as each day goes by."

Travelers didn't have much in the way of alternatives: Amtrak began suspending train service across the Northeast, and New York, Philadelphia, Washington and Baltimore shut down their subways, buses and trains.

Delays rippled across the U.S., affecting travelers in cities such as San Francisco to Chicago. Disruptions spread to Europe and Asia, where airlines canceled or delayed flights to New York and Washington from cities that are major travel hubs including London, Paris, Tokyo and Hong Kong.

JetBlue Airways Corp. expects its cancellations from Sunday through Tuesday to total about 1,200. The airline has hubs at Kennedy airport and Boston's Logan. Rob Maruster, chief operating officer of JetBlue, hopes to resume New York flights on Wednesday morning. But he's worried about flooding of JFK's runways since they are all basically at sea level and near bodies of water.

International travelers would have to wait to get to the East Coast of the U.S. All flights from Paris to Boston, New York, Philadelphia and Washington — a total of 14 — were canceled. Air France has canceled four into JFK and two departures.

Frankfurt airport canceled 12 flights, with German carrier Lufthansa scrapping three to the Northeast and one out of Newark. British Airways had to cancel all its flights to and from New York, Newark, Baltimore, Washington D.C., Boston and Philadelphia — a total of 20.

He learned he could be stuck in Hong Kong for nearly a week because the next available seat was Nov. 4. He was put on a waiting list for seats that could become available earlier.

"They just say: Yeah, it's a pretty big waiting list," said Shrem, throwing up his hands. In the meantime, he'll have to fork out $400 a night to continue staying at a nearby hotel. The airline won't pay for accommodation for stranded passengers if delays are weather related.

As of 11:00 a.m. ET on Monday Hurricane Sandy was about 260 miles south-southeast of New York City, and the center of the storm is expected to be near the mid-Atlantic coast on Monday night. The National Hurricane Center said that the storm has top sustained winds of 90 mph, with higher gusts. Sandy is on track to collide with a wintry storm moving in from the west and cold air streaming down from the Arctic.

Airports in the metropolitan New York City area are open, but air carriers are not operating.

The Port Authority of New York and New Jersey said Monday that travelers shouldn't even try to go to Kennedy, Newark Liberty, LaGuardia and Stewart airports

Air travel in the Northeast started getting complicated on Sunday, when passengers were reporting multi-hour wait times at airline call centers.

Eileen Merberg, 50, was booked on a United flight from her home in Rochester, N.Y. to New Orleans, connecting at Washington D.C.'s Dulles airport.

By that point, she already had told the higher education conference that she was scheduled to speak at that she wouldn't be coming. She tried to cancel her flight over the phone. After two lengthy waits -- her cell phone battery ran out during the first one -- she just hung up.