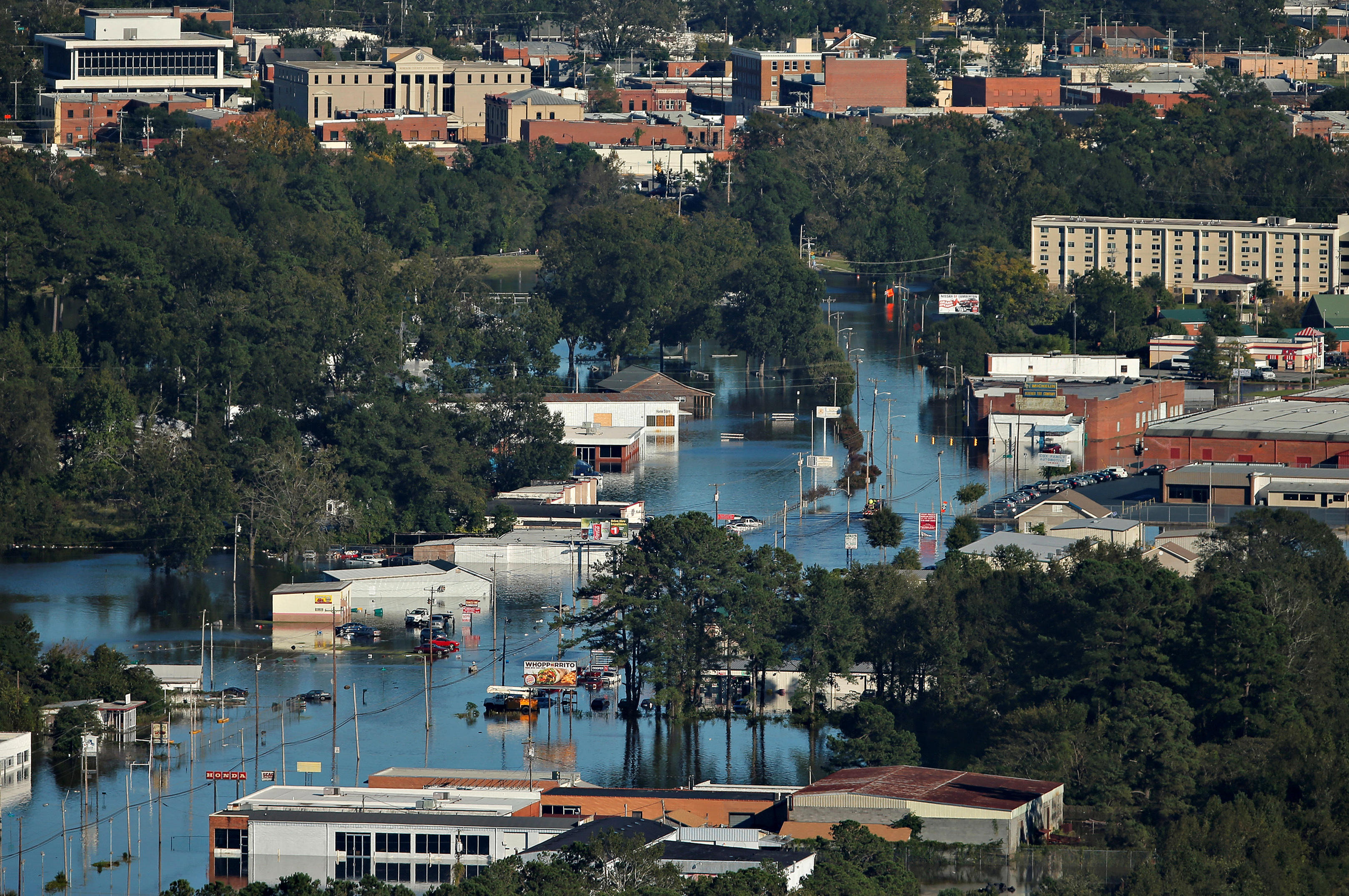 LUMBERTON, N.C. -- The death toll from Hurricane Matthew rose Wednesday along with the floodwaters.

The storm killed at least 36 people in the Southeast -- 20 of them in North Carolina.

“This isn’t residual flooding, this is water that is still rising here,” Cauley said.  “It has risen about 20 inches here.”

People who evacuated, like Cassandra Roach, can do nothing but watch.

“It wasn’t that far up and now I am like, oh my god. It’s overwhelming,” she told Bojorquez.

Of all the towns affected by Hurricane Matthew, Lumberton, a North Carolina city of 22,000, was among the hardest hit and the least able to absorb the blow.

“It is just a heartbreak,” said novelist Jill McCorkle, a Lumberton native. She and her husband, Tom Rankin, drove southeast from their home in Hillsborough, his pickup filled to the gunwales with diapers and drinking water. “It’s a very poor area anyway.”

In her youth, McCorkle worked as a lifeguard on the Lumber. The river meanders through her fictional landscape, where the mosquitoes “are so big they roll up your pants legs to bite you.”

“When people are missing in Marsh County, the river is one of the first places to go,” the novelist wrote in “Carolina Moon,” published in 1996. The police “regularly drag nets up and down through that twisting brown river, one man in the boat designated to watch the branches of the live oaks for snakes that might sense the warmth of bodies below and drop onto them.”

“There’s the constant trade-off of the river giving and taking away,” McCorkle said. “It’s a really beautiful, beautiful river” -- until it bursts its banks and “goes out of control.”

Like so many early settlements, Lumberton depended on the river for survival. By the late 18th century, the town had become a trading center for timber and related materials.

“Rafts of pine logs on which were piled other pine products such as tar, pitch, turpentine and resin were floated down” the river to Georgetown, South Carolina, according to a history produced by the Federal Writer’s Project in the 1930s.

But it wasn’t timber that gave the river and town their names.

To local Indians, it was not the Lumber, but the Lumbee. Poet John Charles McNeill, a native of neighboring Scotland County who grew up along the river, said the name was from a local Indian word meaning “black water.”

In the 2011 book “Communities in Economic Crisis: Appalachia and the South,” Lumbee Indian activist Richard Regan drew a primal connection between his people and the waters upon which they live.

“Like the river, the Lumbees have a mystery, excitement and violence in their history; and like the river they persevere,” he said. “Our very identity is wrapped up in the river. The river gave us isolation to develop community identity. It gave us protection from our many enemies. It gave us spiritual power to sustain our bodies and souls.”

When the timber was depleted, locals turned to tobacco and other crops. In addition to textile mills, the town once boasted about half a dozen tobacco warehouses. But like timber, those industries waned.

The historic downtown is dominated by the courthouse, attorneys’ offices and bail bondsmen. A decal on one window reads: “for a small FEE, we will set you FREE.”

Once-genteel department stores are now empty, and windows into vacant shops are dusty and barren.

The Lumberton Visitors Bureau website lists its location along Interstate 95 -- and the four exits off it -- as its key attraction.

“Lumberton is the midpoint between New York and Florida,” the site declares. “All hotels are visible from the interstate, making access easy for visitors.”

“The look of it was inspired by my childhood in Spokane, Washington,” Lynch once told an interviewer. “There are many Lumbertons in America. I picked it because we would get police insignias and stuff, because it was an actual town. But then it took off in my mind.”

But the director used only the name. Most of the movie was filmed in the more scenic 18th century port city of Wilmington, about 71 miles to the southeast at the mouth of the Cape Fear River.

On Feb. 1, 1988, two Tuscarora Indians entered the offices of The Robesonian newspaper armed with a pistol, knife and two sawed-off shotguns. They chained the doors shut with 20 hostages inside. One of the men, Eddie Hatcher, told a local radio station that they took the action because “We have no justice here in the county.”

“Indians and blacks have been oppressed too long,” he said, demanding to speak to then-Gov. Jim Martin.

The standoff lasted for 10 hours before the men surrendered. Hatcher was sentenced to 18 years in prison. Co-defendant Timothy Jacobs entered a plea bargain and received a six-year prison sentence.

Lumberton is still a rough place. It and surrounding Robeson County had the highest violent crime rate in the state in 2014, the most recent year available, according to state data.

On Monday night, a state trooper shot and killed a man who allegedly confronted officers while holding a gun.

Resident Keira McGirt hopes the floods might help wash some of that history away.

The 23-year-old beauty supply store clerk and her 3-year-old son escaped from the storm with nothing but the clothes they were wearing. They spent the night in a shelter and are now staying with a friend in the city.

On Wednesday, she stood in front of Gold Rush Beauty Supply, next to a shuttered Super Dollar store, handing out food and water. Despite some sporadic gunfire early on, she is proud of how residents have reacted.

“Lumberton needed this,” she said. “We needed this to come together as a city.”

The city thought it was prepared. But no one expected more than a foot of rain in less than 24 hours, on top of heavy rains the week before, said Jim Walters, deputy director of public works.

“We were in a pickle before this even started,” Walters said, noting there was a weak point in the dike where the railroad goes under Interstate 95.

Some the waters have receded. But left behind is a sense of despair.

Terry Jones, 48, wept as he stood on downtown sidewalk Wednesday morning. The water that rose to 4 or 5 feet deep destroyed everything in his home.

He’s staying in his son’s camper. The Smithfield pork-packing worker has lived in Lumberton his entire life and wiped tears from his face with his big hand when he thought about the enormity of what was ahead.

“It’s kind of amazing,” he said. “Life itself can’t sustain without water, and what caused this was water.”

“And you can’t blame water,” he added, “because it’s just part of the environment, and it’s part of what God’s created for us to manage.”