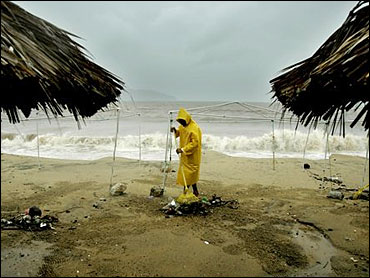 Hurricane John lashed tourist resorts with heavy winds and rain Thursday as the dangerous storm marched up Mexico's Pacific coast, and forecasters predicted its center would brush close to land before nicking the tip of Baja California and heading out to sea.

The Category 3 hurricane could dump up to a foot of rain along parts of Mexico's southern coast, causing landslides or flooding, meteorologists warned. The hurricane had maximum sustained winds of 125 mph early Thursday and stronger gusts capable of ripping roofs off buildings and causing storm surges of up to 18 feet above normal.

John was not expected to affect the United States - cooler Pacific waters tend to diminish the storms before they reach California.

The hurricane had grown into a Category 4 storm on Wednesday but dropped back to a Category 3 after losing some wind speed. Mexico has issued hurricane warnings for about 400 miles of coastline, from the deep-water port of Lazaro Cardenas to the fishing town of San Blas, an area which encompasses all of the massive Bahia de Banderas bay that holds Puerto Vallarta.

The government also extended warnings for parts of the southern Baja Peninsula.

Skies were clear and tourists relaxed Wednesday in Puerto Vallarta, as they strolled the streets, shopped, dined in restaurants and enjoyed the beach

William Rousseau, an Oregon tourist vacationing with his family, said hotel officials had warned about John, "but we're calm because they say it's not going to hit this city."

"We're continuing to enjoy the city," he said. "They just asked us not to go into the ocean or on any bay tours."

But officials postponed the arrival of a Carnival cruise ship, prohibited customary tours of the bay and announced public schools would be closed Thursday.

Puerto Vallarta Mayor Gustavo Gonzales told reporters 50 shelters had been readied, and emergency crews prepared to patrol throughout the night.

Some coastal communities in southern Jalisco state, where Puerto Vallarta is located, were being evacuated because of their proximity to two dams, state authorities said.

The sense of urgency was higher still in Cabo San Lucas, where fishermen and authorities were hurriedly preparing for John's arrival.

"We are preparing shelters for the evacuation of civilians, if that becomes necessary," said Luis Armando Diaz, mayor of Los Cabos, situated on Baja's southern tip. "According to the information we have, the storm is coming right toward Los Cabos."

Cabo San Lucas Port Captain Everardo Jimenez said he instructed the operators of a tourist boat to get the craft out of the water.

Although the center of John was forecast to remain just offshore, hurricane-force winds were expected to rake beaches on the mainland coast, the National Hurricane Center in Miami said. The storm was then expected to nick Los Cabos at the tip of the Baja California Peninsula on Friday before heading out to sea.

The Mexican army and emergency services were on alert all along the coast. The civil protection agency for the state of Jalisco, which includes Puerto Vallarta, announced it would ask 8,000 residents living in risk-prone coastal areas to evacuate voluntarily to 900 temporary shelters. Those who refused would be moved by police officers, the government agency Notimex reported.

Mexican forecasters predicted up to 10 inches of rain on the coast and "torrential downpours" in the Jalisco state capital of Guadalajara, Notimex said. Public schools were canceled in Acapulco and surrounding communities on Wednesday.

In the resort cities of Ixtapa and Zijuatanejo, about three hours up the coast from Acapulco, authorities closed the port to small ocean craft and set up temporary shelters. Some students decided to leave school early before any potential flooding.

Light rain fell in Ixtapa, where the five-star Emporio Hotel received only minor warnings of rising tides. Receptionist David Gonzalez said none of the hotel's 92 guests had said they would leave early.

Pedro Ochoa, reception clerk at the four-star Posada Real Ixtapa Hotel, said neither staff nor guests were making any special preparations for the storm because "we were advised that it was headed elsewhere."

The center of the hurricane early Thursday was about 75 miles southwest of Manzanillo and its outer bands, packing heavy rain, were churning toward the resort and port city, according to the hurricane center. John was moving to the northwest near 15 mph.

Meanwhile, a second weather system, Tropical Storm Kristy, formed in the Pacific far off the Mexican coast early Wednesday, but was forecast to move farther out to sea with no threat to land, the Hurricane Center said. Kristy had maximum sustained winds of 58 mph and was moving northwest at about 6 mph.