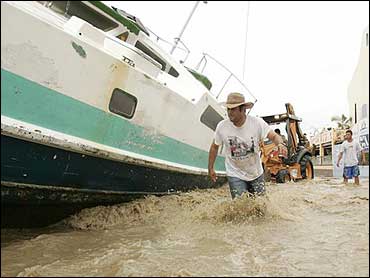 A weakened but still dangerous Hurricane John lashed the main city in the southern part of Mexico's Baja California peninsula with fierce winds and rain early Saturday after sparing the tourist resorts of Los Cabos a direct hit.

John was a Category 2 storm with 100 mph winds when it struck land near isolated hamlets northeast of Los Cabos Friday night, but the U.S. National Hurricane Center in Miami said it had slipped to Category 1 status with winds near 80 mph Saturday morning.

The hurricane knocked out electricity, downed trees and sent billboards flying Saturday in La Paz, a state capital of more than 150,000 people.

One man whose vehicle was swept away by a surge of water was found alive three miles away, clinging to tree branches. He was in stable condition at a local hospital, said Los Cabos government spokesman Jorge Castaneda.

Mexico extended hurricane warnings northward along the east of the peninsula to the community of Mulege — a stretch that includes Loreto, a rapidly growing center of retirement and vacation homes for Americans — and as far as Punta Abreojos on the west coast.

The National Hurricane Center said John was advancing to the north-northwest at near 9 mph. Late Saturday morning, the hurricane was about 110 miles southeast of Loreto.

The storm was expected to gradually weaken while heading up the Gulf of California on Saturday before crossing the narrow stretch of land and heading out to sea.

The Hurricane Center said remnants of John might bring rain to parts of the southwestern United States, but long after it has faded below hurricane status.

Thousands of tourists and impoverished residents had taken shelter in the tourism centers of Cabo San Lucas and San Jose del Cabo on the southern tip of Baja California, but the area avoided a direct hit from the storm, whose hurricane-force winds only extended 25 miles from the eye.

Castaneda said some roadways were damaged but there were no reports of damage to buildings or hotels.

Still, it was hard to immediately assess how the storm may have affected the community's poorest areas, where construction workers, waiters, cooks and chambermaids live in shantytowns, many built along dry riverbeds. Thousands evacuated to shelters were discouraged from returning to their homes late Friday.

"Our house could just blow away in the wind," said Olga Lidia Aguilar, 32, who was evacuated along with her five children from her tarpaper shack in the town of Lagunita.

Some streets were flooded in Cabo San Lucas, but the water was merely ankle-deep. Stores reopened two hours after the hurricane made landfall and residents began returning to the streets.

A passing group of U.S. tourists, asked what they planned to do after the hurricane passed, shouted "Party!" But there was almost nowhere to go. Most of Cabo San Lucas' bars and restaurants remained closed.

The local population was relieved.

"We thank God, because the storm didn't do us any damage," said Los Cabos resident Natividad Garcia, 67, as she waited outside a hotel for a relative to finish work.

In San Jose del Cabo, a brief bout of heavy winds toppled the signs of shops and sent metal gates flying in the air. But there were no reports of major damage.

Miles away from the glittering coastal hotels, 46-year-old bricklayer Francisco Casas waited for John to pass in a schoolroom with his 14-year-old son. They were evacuated from their tin-roofed shack in Tierra y Libertad, one of the squatter camps that dot the sandy flats around Cabo San Lucas.

The Mexican Navy and police evacuated residents, sometimes forcibly, before the storm, but Casas went voluntarily to the shelter, where people slept on thin pads stretched side-by-side over the concrete floor.

"The hurricane is no game, especially where we are surrounded by water on all sides," he said.

Meanwhile, Tropical Storm Kristy weakened early Saturday farther out in the Pacific Ocean, with maximum sustained winds of about 45 mph, and forecasters at the U.S. Hurricane Center in Miami said it could eventually be absorbed by John.