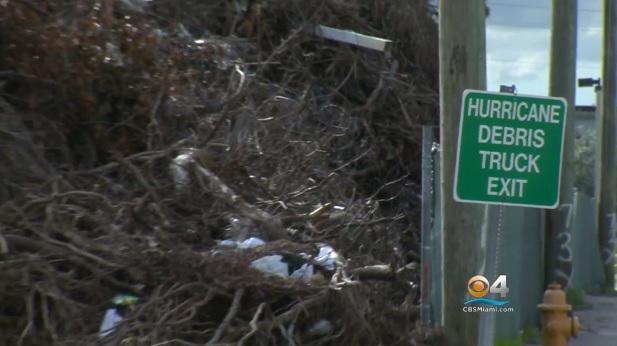 MIAMI -- An enormous and smelly heap of Hurricane Irma debris is plaguing the Liberty City community in South Florida-- and it could be there until February, CBS Miami reports.

"They need to get all that stuff out. Rats and roaches over there. That's embarrassing," an infuriated resident told the station.

There are mattresses, household trash and all kinds of filth in the 341,000-cubic-yard mess being processed just 60 feet from the North Park at the Scott Carver Housing Development.

Residents have been in an uproar.

"When I come outside, I cough a lot because of the smell. I have a 3-month-old grandbaby and it is not good for her," said Sarina McCray.

The site is one of six in Miami-Dade County that has stopped accepting hurricane debris. The mulching of the trash has been slow, dusty and dirty.

"They need to wet it down and stop all that dust from flying all over the place," Randall said.

The problem: homeowners across the county piled all their debris together in one big mix -- everything from palm fronds, tree limbs and stumps to mattresses, bed springs, auto parts, furniture -- you name it. All that has to be separated and the mulchers can only handle vegetative debris.

"I can't breathe when I come out here because the air is not clear," said Erasmo Arroyo.

Miami-Dade County, which owns the land in the Poinciana Industrial Park Debris Site, addressed the situation.

"Debris staged at the site is being size reduced pursuant to FEMA requirements prior to being removed," officials said. "The contractor is working seven days per week to grind the debris as quickly as possible. When the job is complete, the contractor will restore the location to its previous condition."

According to the county, the site was picked following FEMA guidelines, telling CBS Miami the establishment and operation of strategically located staging sites was a critical component of the debris management operation.

"This is a disgrace. I want to know why they come in the low income area to put their trash," said Caprice Brown.

So when is the site going to be cleared? No one is really saying. Most mention weeks. Some say months.

Meanwhile, the dust and stench foul the air are just a couple of the growing problems.

Anis Gonzalez told Tester there are big rats and tons of bugs.

Residents of the housing complex said they have not heard much from their elected public officials and they are getting very tired of all this, adding it has gone on way too long.