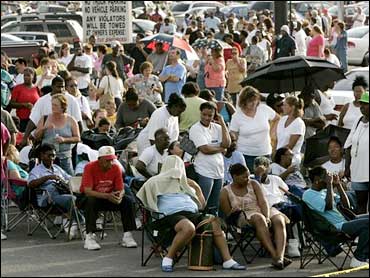 Hurricane Rita was less severe than expected, but don't tell that to the tens of thousands of Louisiana and Texas residents of rural areas wiped out by the storm, including fishing villages, farms and ranches now under nine feet of water.

Rescuers following Rita's path of devastation Monday continued to pull stranded bayou residents out on skiffs, as helicopters watched for thousands of cattle believed to have drowned.

Crews struggled to clean up the tangle of smashed homes and downed trees. The hurricane slammed low-lying fishing villages, shrimping ports and ranches with water up to 9 feet deep. Seawater pushed as far as 20 miles inland, drowning acres of rice, sugarcane fields and pasture.

CBS News correspondent John Blackstone reports that small towns along the Texas-Louisiana coast, such as Cameron, La., have been

Fewer than 10,000 people live in Cameron Parish and almost all of them evacuated as Rita approached, Blackstone reports. But now the roads are blocked, ruined or flooded and there is little to come back to. One community, Holly Beach, once home to 150, has been completely washed away — not even the ruins remain.

In coastal Terrebonne Parish, the count of severely damaged or destroyed homes stood at nearly 9,900. An estimated 80 percent of the buildings in the town of Cameron, population 1,900, were leveled. Farther inland, half of Creole, population 1,500, was left in splinters.

"I would use the word destroyed," Army Lt. Gen. Russel Honore said of Cameron. "Cameron and Creole have been destroyed except for the courthouse, which was built on stilts on higher ground. Most of the houses and public buildings no longer exist or are even in the same location that they were."

The death toll from the second devastating hurricane in a month rose to seven with the discovery in a Beaumont, Texas, apartment of five people — a man, a woman and three children — who apparently were killed by carbon monoxide from a generator they were running indoors after Rita knocked out the electricity.

Houses in the marshland between Cameron and Creole were reduced to piles of bricks, or bare concrete slabs with steps leading to nowhere. Walls of an elementary school gymnasium had been washed or blown away, leaving basketball hoops hanging from the ceiling. A single-story white home was propped up against a line of trees, left there by floodwaters that ripped it from its foundation. A bank was open to the air, its vault still intact.

"We used to call this sportsman's paradise," said Honore, a Louisiana native. "But sometimes Mother Nature will come back and remind us that it has power over the land. That's what this storm did."

While residents of the Texas refinery towns of Beaumont, Port Arthur and Orange were blocked from returning to their homes because of the danger of debris-choked streets and downed power lines, authorities in Louisiana were unable to keep bayou residents from venturing in on their own by boat to see if Rita wrecked their homes.

"Knowing these people, most of them are hunters, trappers, farmers. They're not going to wait on FEMA or anyone else," said Robert LeBlanc, director of emergency preparedness in Vermilion Parish. "They're going to do what they need to do. They're used to primitive conditions."

And many were finding that conditions were, in fact, primitive. Across southwestern Louisiana, many people found they had no home to go back to.

victims of heat (video).
Officials in Jefferson County, Texas, are struggling to get generators, but are being met with a sluggish response from FEMA.
Louisiana's Department of Wildlife and Fisheries said its teams used small boats to rescue about 200 people trapped in their homes. In Chauvin, a steady stream of people were brought by small boats from flooded sections of Terrebonne Parish. Some cried as they hauled plastic bags filled with their possessions.

"This is the worst thing I've ever been through," said Danny Hunter, 56. "I called FEMA this morning, and they said they couldn't help us because this hasn't been declared a disaster area."

A Federal Emergency Management Agency spokesman said that Terrebonne Parish was declared a disaster area for Katrina but not for Rita. Officials were checking to see if the residents were eligible for Rita help.

With the floodwaters going down, officials turned their attention from rescuing people to saving property, including cattle

many of which were seen swimming in the brown floodwaters.

The Army used Blackhawk helicopters equipped with satellite positioning systems to search for cattle amid fears as many as 4,000 may have been killed in Cameron Parish alone, where ranchers on horseback struggled to herd the animals into corrals attached to pickup trucks.

"Take all the coastal parishes, they all had cattle," said Bob Felknor, spokesman for the Louisiana Cattlemen's Association. "It could be more than 30,000 in trouble."

Texas put the damage from Rita at a preliminary $8 billion.

Gasoline and traffic were both flowing smoothly as metropolitan Houston continued its second day of a voluntary, staggered re-entry plan, an attempt to avoid the epic gridlock that accompanied the exodus of nearly 3 million people last week.

"It's not stop-and-go traffic. Everything is flowing," said Mike Cox, a spokesman for the Texas Transportation Department. He said crews were also making progress in clearing trees and downed power lines from major roads.

In New Orleans, Mayor Ray Nagin picked up where he left off before Rita with his plan to reopen the Big Easy, inviting people in the largely unscathed Algiers neighborhood to come back and "help us rebuild the city."

About 300,000 customers were without power in Louisiana, and 250,000 in Texas on Monday, a number cut in half since the storm hit. A spokesman for Entergy, a major utility in both states, said it could be more than a month before some customers have power restored, and rolling blackouts are possible if residents in unaffected areas do not cut back on usage.

Among the deaths attributed to Rita was a person killed in Mississippi when a tornado spawned by the hurricane overturned a mobile home, and a Texas man struck by a falling tree. Two dozen evacuees were killed before the storm in a bus fire near Dallas.