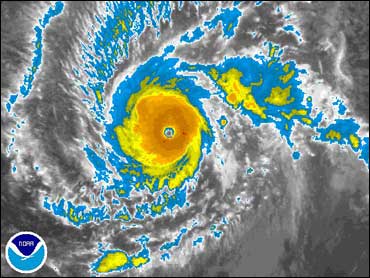 Hurricane Flossie weakened to a Category 3 storm Monday with maximum sustained winds of 126 mph as it roared toward Hawaii, but it was expected to pass by the islands.

Forecasters earlier had said cooler weather would weaken the storm to a Category 1 hurricane, with sustained wind of at least 74 mph, by the time it passes about 70 miles south of the Big Island of Hawaii late Tuesday or early Wednesday.

But on Monday forecasters said they now expected a Category 3 hurricane, with little change in strength when it passes the island. Earlier in the day, Flossie had been a Category 4 storm with maximum sustained winds of 140 mph.

"The intensity has remained stronger than what was originally forecast, but the track has been pretty much right on," said Jim Weyman, the National Weather Service's meteorologist in charge in Honolulu.

The Central Pacific Hurricane Center said Flossie "remains a dangerous hurricane with a clear well-defined eye and good outflow. ... It must be noted that Flossie has been surprisingly resilient to cooler ocean temperatures so far."

The weather service placed the Big Island under a hurricane watch and a tropical storm warning. A flash flood watch was also issued for the island through Wednesday, with possible flash flooding in areas.

Why Florida researchers are bashing in the brains of iguanas

Mayor Harry Kim declared a state of emergency Monday as a precaution. All 56 public schools on the Big Island also were closed for Tuesday.

The Big Island is largely rural, with about 150,000 people, and most live in the west or northeast — not the southern portion expected to be hit hardest by the hurricane. Other islands are expected to get much less of the storm's wind and rain.

At 5 p.m. EDT, Flossie was about 425 miles southeast of Hilo, the Central Pacific Hurricane Center said. It was moving west-northwest at about 15 mph.

Meteorologists cautioned that even a slight change of course in the unpredictable storm could take it closer to land.

Emergency workers had mobilized Sunday afternoon to prepare for the potentially devastating hurricane, the mayor said.

"You always prepare for the worst case scenario and hope for the best," Kim said.

Even though the eye of the storm may miss the Hawaiian Islands, Flossie could still bring strong wind and heavy rain, forecasters said.

Officials strongly urged residents statewide to prepare, including having a supply of food, water and disaster plans.

Parts of the Big Island, home to one of the world's most active volcanoes in Kilauea, likely will experience tropical storm-level winds and at least 10 to 15 inches of rain, Weyman said.

The south shore could see also see waves of 10 to 15 feet, forecasters said, with the surf rising starting late Monday. Waves along the east facing shores could increase to 8 to 12 feet on Tuesday. The island's South Point is the southernmost area of the United States.

The last time a hurricane hit Hawaii was in 1992, when Iniki ravaged Kauai, killing six people and causing $2.5 billion in damage.

Hurricane season runs from June 1 to Nov. 30. In May, forecasters said the Hawaiian Islands and the rest of the central Pacific faced a slightly below-average hurricane season, with just two or three tropical cyclones expected because of lower sea surface temperatures.

The islands get an average of 4.5 tropical cyclones a year; only about one every 15 years is powerful enough to be a hurricane. Last year, the central Pacific had five tropical cyclones after the National Oceanic and Atmospheric Administration predicted two to three.

On July 21, a tropical depression moved past the Big Island, bringing a few inches of rain to the parched island but no major problems. Cosme, the year's first Pacific tropical cyclone, reached hurricane status for a day before it weakened.