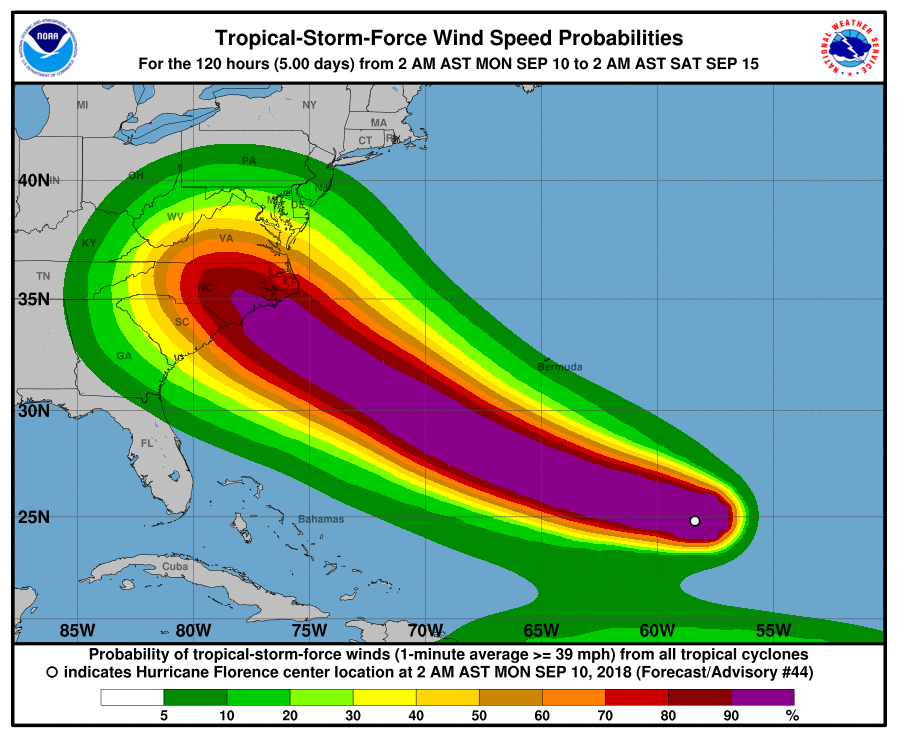 RALEIGH, N.C. -- Hurricane Florence exploded into a potentially catastrophic Category 4 storm Monday as it closed in on North and South Carolina, carrying winds up to 140 mph and water that could wreak havoc over a wide stretch of the eastern United States later this week. The South Carolina governor ordered the state's entire coastline to be evacuated starting at noon Tuesday.

The storm's first effects were already being seen on barrier islands as dangerous rip currents hit beaches and seawater flowed over a state highway. Communities along a stretch of coastline that is vulnerable to rising sea levels due to climate change prepared to evacuate.

In announcing his evacuation order, South Carolina Gov. Henry McMaster said an estimated 1 million people would be fleeing the coast. Eastbound lanes of Interstate 26 heading into Charleston and U.S. 501 heading into Myrtle Beach will be reversed when the order takes effect.

North Carolina Gov. Roy Cooper said his state was "in the bullseye" of the storm and urged people to "get ready now." For many people, the challenge could be finding a safe refuge: If Florence slows to a crawl just off the coast, it could bring torrential rains to the Appalachian mountains and as far away as West Virginia, causing flash floods, mudslides and other dangerous conditions.

The NHC says that Florence could intensify and be close to Category 5 strength by Tuesday with the potential to cause catastrophic damage.

Just before 5 p.m. ET Monday, Florence was centered about 1,170 miles east-southeast of Cape Fear, North Carolina, and moving west-northwest at 13 mph. Its center will move between Bermuda and the Bahamas on Tuesday and Wednesday and approach the coast of South Carolina or North Carolina on Thursday, NHC said.

"The bottom line is that there is high confidence that Florence will be a large and extremely dangerous hurricane, regardless of its exact intensity," NHC said.

The University of South Carolina campus in Aiken announced that it will be closed Tuesday, Sept. 11 "until further notice per Gov. McMaster's order," the school wrote Monday night on Twitter.

Florence is also impacting some of the NCAA Division I-A games in Virginia and the Carolinas. It has already forced Coastal Carolina to move its game against Campbell up three days from Saturday to Wednesday. CBS Sports has a full list of potentially affected games.

People living well inland should prepare to lose power and endure flooding and other hazards, he warned. "It's not just the coast," Graham said. "When you stall a system like this and it moves real slow, some of that rainfall can extend well away from the center."

People in Wilmington, North Carolina, were stocking up on water, plywood and generators to prepare for the storm, CBS News correspondent David Begnaud reports. Some store shelves were already empty.

Florence could be the first major hurricane to slam North Carolina dead-on since Fran hit as a Category 3 in 1996. Fran toppled homes and businesses across the state.

Fran caused more than $8 billion in damage and killed 37 people.

"These storms are catastrophic events," said Andrew Wunderley, who works for a water-conservation group in South Carolina. He said the low-lying cities on the coast are particularly vulnerable to flooding.

"I think what we found is that we're not really that prepared for these events," Wunderley said. In October 2015, a storm system caused 36 dams to fail across South Carolina, resulting in what was called a "thousand-year flood."

At least 25 people died. If Florence ends up stalling after it makes landfall in the southeastern U.S., the fear is that could happen again.

"What that means is not only do we have a serious, 130 mph potential wind threat at landfall along with catastrophic storm surge, but also a very large inland flood threat that could include two feet of rain in certain spots including inland North Carolina's most populous cities," CBS News weather producer David Parkinson said late Sunday. "The most important takeaway out of the storm is that this will not be a quick hitting major storm but a long duration one. We will likely be talking about this actively raining at this time next week. Pace yourselves. It's gonna be a long one."

A warm ocean is the fuel that powers hurricanes, and Florence will be moving over waters where temperatures are peaking near 85 degrees, the hurricane center's specialist Eric Blake wrote. And with little wind shear to pull the storm apart, Florence's hurricane wind field was expected to expand over the coming days, increasing its storm surge and inland wind threats.

Meanwhile, two other storms were also spinning in the Atlantic. Hurricane Isaac was expected to lose strength as it reaches the Caribbean, and Helene, much farther out to sea, may veer northward into the open ocean as the 2018 hurricane season reaches its peak.

In the Pacific, Hurricane Olivia triggered warnings for multiple Hawaiian islands as it blew west toward an arrival over the state as soon as late Tuesday or early Wednesday. It will either end up being a high-end tropical storm or a low-end hurricane in the coming days, according to forecasters.

"The difference between the two is very slight, so we really need to prepare as if it's a hurricane," said Maureen Ballard, a meteorologist at the Central Pacific Hurricane Center.

Forecasters say Olivia may drop 10 to 15 inches (25 to 38 centimeters) of rain on the Big Island and Maui County, though some areas could get 20 inches (50 centimeters.)

Preparations for Florence were intensifying up and down the densely populated coast. Since reliable record-keeping began more than 150 years ago, North Carolina has been hit by only one Category 4 hurricane: Hazel, with 130 mph winds, in 1954.

Red flags have already been flying on beaches, warning swimmers to stay out of the water as seas began kicking up. In Florida, a 64-year-old man drowned off New Smyrna Beach in the rough surf, CBS affiliate WKMG-TV reports.

The parking lot has been full for three days at the Ace Hardware store in coastal Calabash, North Carolina, where manager Tom Roberts said he sold 150 gas cans in two hours Monday, along with generators, plywood, rope, manual can openers, sand bags and a plethora of other items. "I've been doing this since 1983," Roberts said as he completed an order for another 18-wheeler full of supplies. "This is the craziest one."

Many newcomers have moved to the coast in the nearly 19 years since the last strong hurricane -- Floyd -- threatened the area. Roberts said he's telling them to get out of town. "I'm telling them to go inland, but I'm worried about the rain and tornadoes too," Roberts said.

Several meteorologists said Florence could do what Hurricane Harvey did last year over Texas, dumping days of rain, although not quite as bad.

"I think this is very Harvey-esque," said University of Miami hurricane expert Brian McNoldy. "Normally, a landfalling tropical cyclone just keeps on going inland, gradually dissipating and raining itself out. But on rare occasions, the steering patterns can line up such that a storm slips into a dead zone between troughs and ridges."

On North Carolina's Outer Banks, Dawn Farrow Taylor, 50, was gathering photos and important documents and filling prescriptions Monday before heading inland. She grew up on the island chain, and says this will be only the second time she's evacuated.

"I don't think many of us have ever been through a Category 4. And out here we're so fragile. We're just a strip of land - we're a barrier island," she said.

In the village of Buxton, Liz Browning Fox plans to ride the storm out in her house on top of a ridge. She believes her home, built in 2009, will be secure, but it's hard to foresee all potential hazards.

"You never know, there could be tree missiles coming from any direction," she said. "There is no way to be completely safe."

In Mississippi, a "Make America Great Again" rally scheduled for Friday in Jackson was canceled, President Trump's re-election campaign announced on Monday. "With Hurricane Florence on its way, we determined that this is the safest decision," campaign Chief Operating Officer Michael Glassner said in a statement.