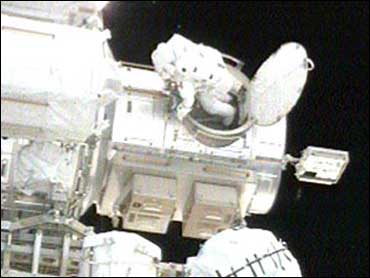 Astronauts aboard the shuttle Endeavour and the international space station on Saturday embarked on the last spacewalk of their joint mission, an outing that was scaled back because of approaching Hurricane Dean.

NASA shortened the spacewalk by two hours so Endeavour could return to Earth on Tuesday, a day early, if the storm appeared to threaten the Houston home of Mission Control.

Spacewalkers Dave Williams and Clay Anderson were scheduled for about 4 1/2 hours of work installing a shuttle inspection boom stand on the station and securing an antenna mount. The rest of the original itinerary involved several space station chores that could be done later.

The two astronauts said they would be extra careful, avoiding any sharp edges, so they don't rip a glove and have to rush back inside. They also will frequently check their gloves for damage.

The mission's third spacewalk was cut short on Wednesday when astronaut Rick Mastracchio noticed he'd pierced the thumb of his left glove. The slit penetrated only the top two layers of his five-layer glove.

Hurricane Dean is currently heading toward Mexico's Yucatan Peninsula. If it looks like the storm might veer toward Houston, Mission Control could be forced to relocate to the Kennedy Space Center in Florida.

YouTube says the battle with TV is already over

Operations at Cape Canaveral would not be as good and there would be fewer controllers, which is why NASA was leaning toward bringing the shuttle home a day early.

Endeavour's original flight plan called for it to undock from the station on Monday and land Wednesday.

Documents that Mission Control sent to the crew early Saturday said they would undock Sunday and landing was being planned for Tuesday. But NASA officials said a final decision would be made later in the day, after mission managers analyzed the most recent forecasts.

Shuttle managers also decided Friday to put off fuel-tank preparations for the next launch until engineers decide how to best solve the latest foam-loss problem.

A piece of foam, ice or a combination of both broke off the tank during Endeavour's launch last week and shot into the shuttle's belly, carving out a deep gouge that triggered a week of furious thermal analyses.

The concern was not that Endeavour might be destroyed like Columbia was in 2003, but rather that heat exposure during re-entry might weaken the aluminum frame and require lengthy post-flight repairs.

Mission managers decided Thursday that the damage wasn't bad enough to assign astronauts the risky task of repairing the gash during Saturday's spacewalk.

Foam has come off that same part of the tank — a bracket that holds the liquid oxygen feed line in place — on previous flights.

LeRoy Cain, a ranking member of the mission management team, said the redesign to the area in question probably will not delay the next mission, currently targeted for October. But it could well postpone some of the flights after that, he said.