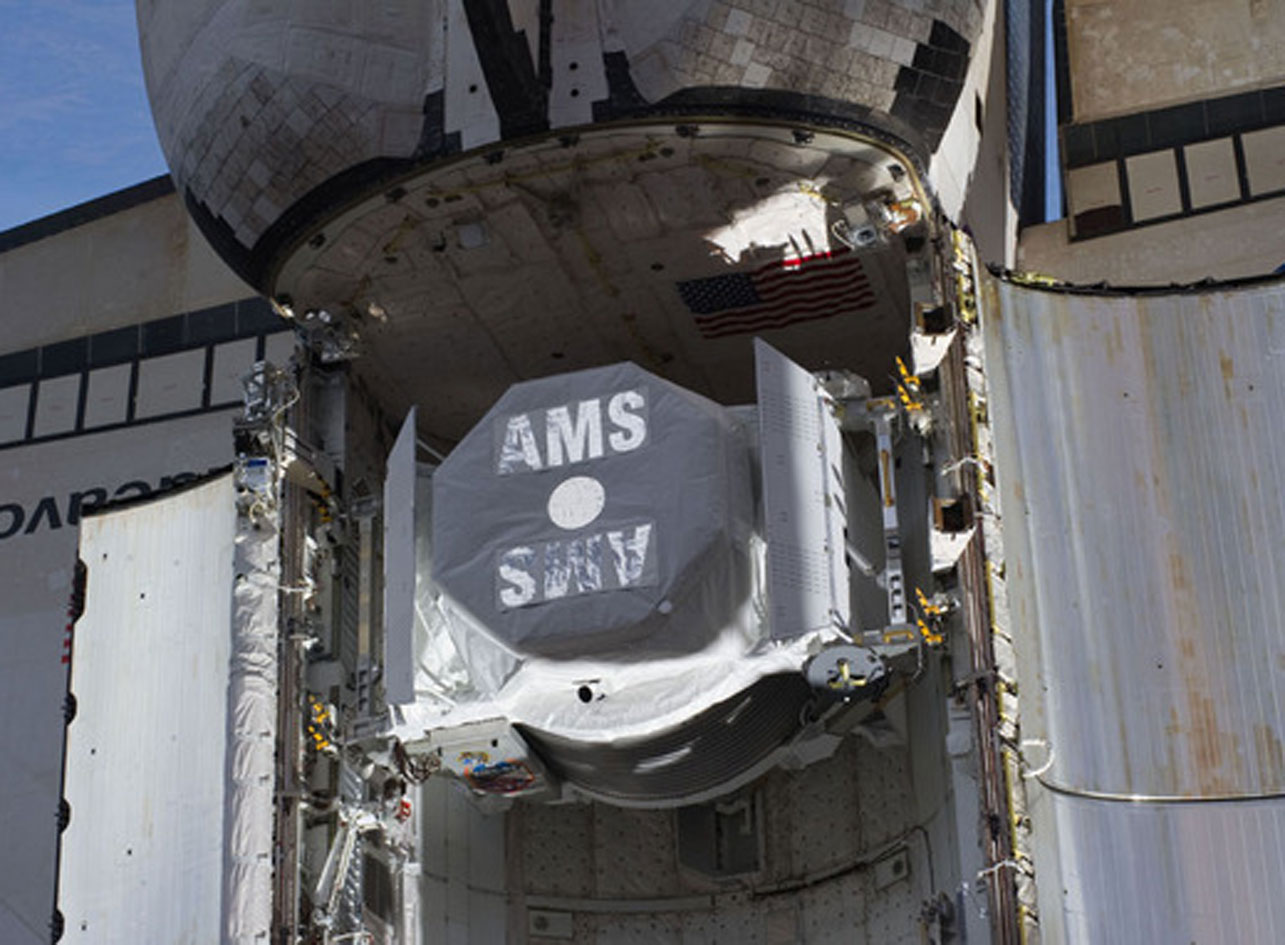 A $2 billion cosmic ray detector attached to the International Space Station has confirmed a steady flow of antimatter positrons streaming through the solar system from all directions, possibly the tell-tale fingerprints of collisions between particles of as-yet-unseen dark matter, scientists said Wednesday.

But researchers do not yet have enough raw data to reach a statistically reliable conclusion. As such, they cannot rule out the possibility that the positrons detected by the Alpha Magnetic Spectrometer, or AMS, were generated by rapidly spinning pulsars, the collapsed remnants of massive suns destroyed in supernova explosions.

Based on theoretical issues, the energy carried away by positrons from dark matter interactions should have a sharply defined upper limit. Samuel Ting, the AMS principal investigator, told reporters the instrument is working flawlessly and additional observations should resolve the question once and for all.

"With more data, we will soon know where (the energy spectrum) drops off, how quickly it drops off," Ting told reporters in a NASA news conference. "And then we will know if what we see is from dark matter collisions or from pulsars."

The 7.5-ton Alpha Magnetic Spectrometer is an international project with more than 600 researchers representing more than a dozen countries. It was assembled at the European Organization for Nuclear Research, or CERN, and launched aboard the shuttle Endeavour on May 16, 2011. It is mounted on the right side of the International Space Station's solar power truss.

Using a massive magnet to bend the trajectories of high-energy cosmic rays -- electrically charged particles generated by supernovas, neutron stars, black holes and other energetic phenomena -- the AMS was built to look for evidence of antimatter and as-yet-undetected dark matter, believed to make up a quarter of mass-energy of the universe.

The AMS "really probes the foundations of modern physics," Ting said before launch. "But to my collaborators and I, the most exciting objective of AMS is to probe the unknown, to search for phenomena which exist in nature but yet we have not the tools or the imagination to find."

AMS operates autonomously, beaming down a continuous stream of data. Over its first year and a half of operations, the machine detected some 25 billion "events," including 6,800,000 negatively charged electrons and more than 400,000 positively charged positrons.

The excess positrons "show no significant variation over time, or any preferred incoming direction," according to a statement from CERN.

"These results are consistent with the positrons originating from the annihilation of dark matter particles in space, but not yet sufficiently conclusive to rule out other explanations."

The AMS data confirm earlier observations made by balloon-borne instruments and satellites. But the massive AMS provides much more precision and could operate for as long as the International Space Station remains in orbit.

"These other experiments have, in fact, observed this type of increase that one would expect from dark matter annihilation," said Michael Salamon, AMS science program manager at the Department of Energy.

"It's very important to say there may be a very common, prosaic explanation for this excess. It could be due to pulsars. We don't know. The fact is, AMS has made a high-precision measurement and in the future, with more statistics, we're going to learn more about the nature of this excess and, if nature is kind, we might have a very exciting discovery in the future."

Dark matter is believed to provide the gravitational glue that holds galaxies and clusters of galaxies together. While it has not been directly detected, its gravitational influence can be seen in spectroscopic measurements showing how fast galaxies rotate.

Based on their visual appearance alone, galaxies would be expected to rotate faster near their massive cores and slower in their far-flung extremities. But spectroscopic studies show no such difference, implying an unseen mass.

"We know we live in a sea of dark matter, our galaxy is embedded in a huge, roughly spherical halo of dark matter particles," Salamon said. "We know that dark matter interacts gravitationally, that's how it was first detected, but we also know it doesn't interact with light, hence the term 'dark matter,' and it doesn't experience the strong or nuclear interaction."

While AMS cannot directly detect dark matter, it can detect the positrons that would be expected from dark matter collisions. The energy carried away by such positrons should have an upper limit, resulting in a sharp drop off in the energy spectrum.

If such a drop off is eventually observed, scientists will have strong evidence for the direct detection of dark matter interactions. If higher energy particles are observed, the pulsar explanation would be more credible.

Asked how long it might take to resolve the question, Ting said "we do not know, because it really doesn't depend on us. It depends on nature."

"If there's a sudden quick drop off of the spectrum, this means we will have found dark matter," he said. "If the excess comes from pulsars, then it's going to drop off very slowly. I think in the next year or two we'll know much better. We have some information now, of course, but not enough statistics."