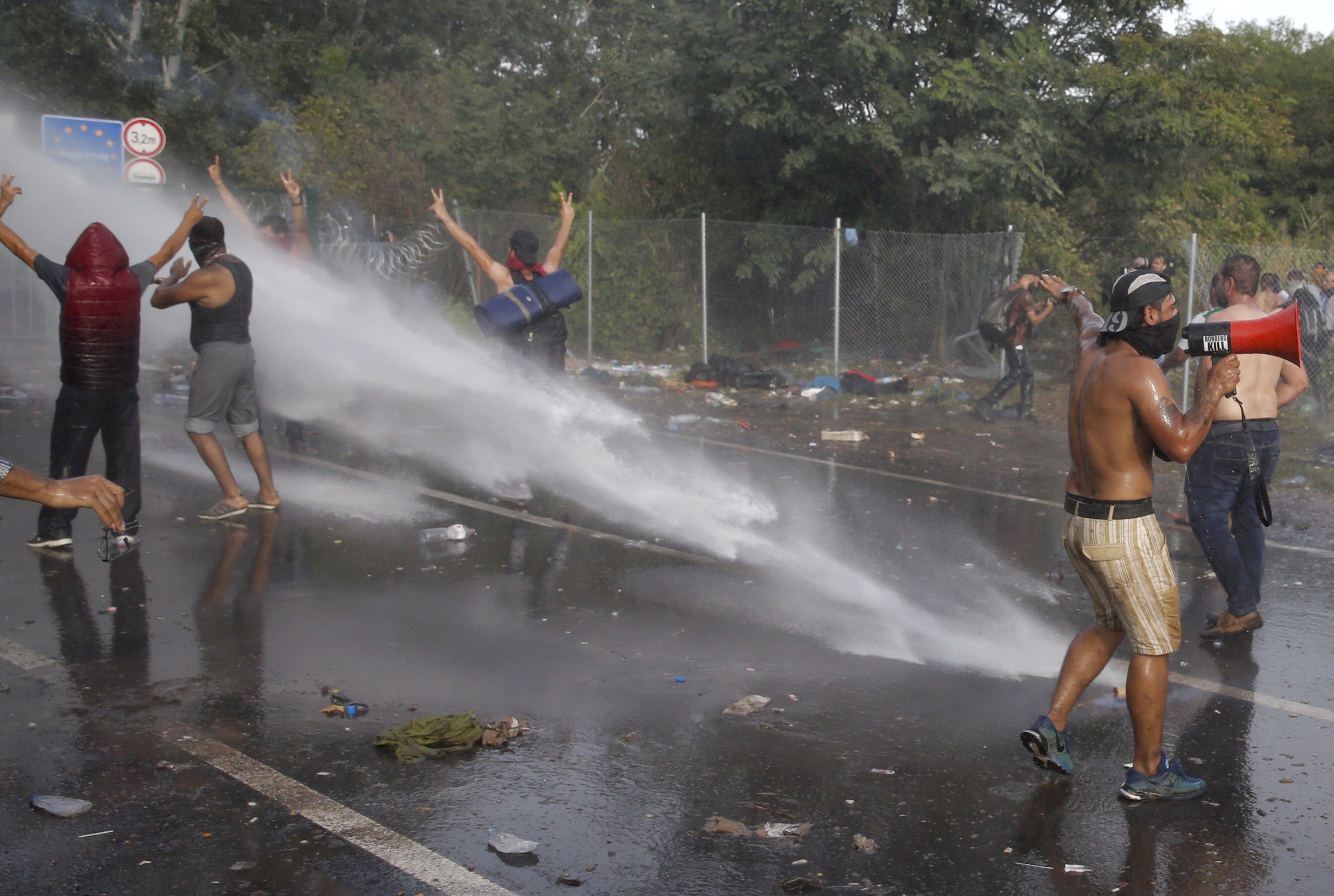 HORGOS, Serbia -- Europe's migrant crisis took another ugly turn Wednesday when Hungarian riot police used tear gas, pepper spray and water cannons to beat back hundreds of people massed at the border with Serbia after some broke through a gate. Children cried as they fled from the acrid smoke, and several people fainted in the chaos.

With the route through Hungary apparently closed, some migrants set out on a longer, more arduous route into Western Europe through Croatia.

Frustrated migrants - many of them war refugees from Syria and Iraq - who were blocked on the Serbian side of the border threw plastic water bottles and rocks at helmeted riot police and chanted demands that the now-sealed border be re-opened.

"We fled wars and violence and did not expect such brutality and inhumane treatment in Europe," said Amir Hassan, an Iraqi who was soaking wet from the water cannon and trying to wash tear gas from his eyes. "Shame on you, Hungarians," he shouted pointing in the direction of the shielded Hungarian policemen who were firing volleys of tear gas canisters directly into the crowd.

One of those who fainted was a woman who was holding a baby. Children and women cried while young men with scarves over their faces hurled stones as they charged toward the police through thick tear gas smoke. Several Serbian ambulances arrived to treat the injured.

The crowd also lit up old tires, causing dark smoke to fill the air. Hungarian media reported that a pregnant woman began giving birth to a baby amid the clashes.

The tensions escalated after hundreds of people broke through a border gate and were pushed back by the Hungarian police. Before that, some women had pushed to the front of the crowd holding small babies and children above their heads as they faced police in an obvious appeal for mercy, but no one made it through.

Government spokesman Zoltan Kovacs described the group as an "armed mob of illegal migrants," telling reporters at the border that "these people are using kids as a human shield."

Serbia's prime minister on Wednesday condemned the "brutal treatment" of migrants by Hungarian police and warned the neighboring county not to fire tear gas onto its territory again.

Aleksandar Vucic, speaking from the U.S. while on an official visit, said he would raise the issue in a meeting Wednesday with U.S. Secretary of State John Kerry.

Vucic also said there must be an EU response to clashes between migrants and Hungarian police, who used tear gas, pepper spray and water cannons against hundreds of people at the Hungary-Serbia border.

In the past few months, Hungary has become a main entry point into the European Union for migrants with more than 200,000 entering the country so far this year. Almost all entered from the southern border with Serbia and passed through Hungary quickly on their way to Germany or other wealthy Western European nations.

But Hungary acted this week to stop the huge flow of people, sealing off its border with Serbia with a razor-wire fence and making it a crime to enter the country illegally. Hungary's Prime Minister Viktor Orban said Wednesday the country also plans to build a fence on some sections of its border with Croatia.

Hungary's Foreign Minister Peter Szijjarto decried what he called "brutal attacks" by the migrants against Hungarian police and asked Serbia authorities to crack down on the migrants, who were on the Serbian side of the border.

"I think these pictures make it clear why the Hungarian government decided to take the measures it has recently taken," Szijjarto said.

Serbian Labor and Social Care Minister Aleksandar Vulin expressed "the harshest possible protest" over Hungary's use of tear gas and water cannons against the people at the border. Speaking on Serbian state TV from the Horgos border crossing, Vulin said he urged refugees to go to a migrant center in Kanjiza to get food, water, medical aid and rest for a while.

He didn't have any information about the injured, but said incidents were expected as Hungary closed the border. "Hungary must show it is ready and capable to accept these people," said Vulin.

CBS News correspondent Charlie D'Agata was in Horgos, where dozens of refugees have massed with nothing to eat and nobody to guide them to another way across. Hungary sealed its border with Serbia on Tuesday, closing the gaps in a brand new fence with reams of razor-wire.

Rohdi Layos from Syria told CBS News he still thinks Hungary will fold under pressure and reopen the border. He told D'Agata he knew the border was shut even before he arrived in Horgos, but he's hopeful.

"If they maybe open this gate and we will go to our future -- and my mother is in Germany," he said.

Hungarian authorities also said Wednesday that they have arrested a total of 519 migrants who tried to cross the border since tough new laws went into effect on Tuesday that make it a crime to cross from Serbia anywhere other than at legal checkpoints. Authorities launched 46 criminal prosecutions and found two Iraqi men guilty, the first convictions based on the new laws.

Two men were expelled from Hungary and banned from re-entering the country for a year.

Televised images from a courthouse in Szeged earlier showed four Iraqi men who were charged with their hands tied in front of them.

Syrian President Bashar Assad on Wednesday blamed Europe for the crisis, saying it's a direct result of the West's support for extremists in Syria over the past four years.

In an interview with Russian media, Assad accused Europe of supporting "terrorism" and providing "protection for terrorists, calling them moderates."

Earlier in the day, Hungary's foreign minister denied that closed borders and tough new laws signal callousness toward refugees, repeating the government's claim that most of those entering Hungary are actually economic migrants.

"Based on our history, we are always in solidarity with the refugees," Szijjarto told The Associated Press in an interview. "What we're saying is that we cannot accept economic migrants because we cannot bear the burden of that."

Migrants trapped at border crossing near Horgos, a Serbian village, were confused about whether to keep waiting or to try to enter the EU through Croatia, a longer and less direct path into Western Europe.

"I don't know what to do - stay here or try some other way to cross the border," said Ahmed Sami from Aleppo, Syria. "We walked and traveled for hundreds, thousands of kilometers only to be stopped meters from the European Union. My wife and children cannot stand on their feet any more. This is tragic."

At least 300 crossed into Tovarnik, Croatia, after they were bused to the Serbian border town of Sid on an all-night ride from Macedonia.

Croatian Prime Minister Zoran Milanovic criticized Hungary's decision to seal its border with Serbia for migrants and said Croatia will not do the same.

"We are ready to accept these people, regardless of their religion and the color of their skin, and direct them to the destinations where they wish to go, Germany and Scandinavia," Milanovic told lawmakers in Parliament.

Croatian police say that nearly 900 people have entered the country as they seek a new migration route into the European Union.

Elsewhere in Europe migrants remained on the move.

Greek police said about 5,000 refugees and migrants crossed the country's northern border with Macedonia in the 24 hours from Tuesday morning to Wednesday morning.

Meanwhile, Austria began selective controls of vehicles at three main border crossings with Hungary as it tries to impose some order over the stream of people.