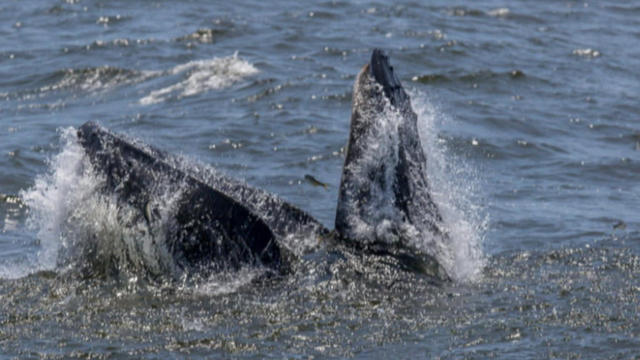 New video shows a diver off the coast of Tasmania coming face to face with a whale recently in a once-in-a-lifetime encounter.

But you don't have to travel to Australia to see these marine giants--they're now in the waters off New York City.

Though the Hudson River was once a national symbol for pollution, humpback whales have become a more common sight around New York and New Jersey, reports CBS News correspondent Jeff Glor.

In Rockaway, Queens, steering with Manhattan's skyline to the side, the American Princess sets sail on a whale-watching expedition.

"A friend of mine said, 'Do you know there's a whale watch out of Breezy Point?' And my question to her was, 'are you high?'" said Catherine Granton, a naturalist who studies whales.

While New York City is typically associated with things like the Empire State building and the Statue of Liberty, John Cronin thinks we should add whales to that list.

Cronin, a renowned environmentalist and a professor at Pace University, said, "We should. New York City is a water city."

"A humpback whale does not know that it's swimming through a city and that is what makes this such an amazing place," Cronin said.

A whale sighting may look like an acrobatic display with its fluke set against the city's skyscrapers, but they're actually lunge feeding--attacking fish called menhaden.

"One of the things that brings everything together is this food chain," said Paul Sieswerda, the president of the non-profit Gotham Whale. He says menhaden are thriving because the water is cleaner.

This is quite a change from the 70s and 80s when Cronin knows the waters were a wasteland.

"Full of rats and sewage, it was quite different than it is now," according to Cronin.

As the first Hudson River keeper, Cronin patrolled the waterway for polluters.

"Industries were indiscriminately violating the law and that's all changed. But, no, it was like the Wild West in the-- in the early 1980s," Cronin said.

"We are seeing some biological rejuvenation," according to Cronin.

Rejuvenation spawned by decades of cleanup, which began with the passing of the Clean Water Act in 1972.

"A lot of people believe that the Clean Water Act has done its job. When in fact it's three decades past due-- in its goals. The big worry now is that Congress will weaken then law. We shouldn't be cutting back the EPA which provides the funding and the technical expertise--to clean up the nation's waterways. We should be increasing that," Cronin said.

Still, the cleaner water has lured back the fish that whales like Patchy feast on.

"Patchy is a whale that we saw last year for sure. This whale is very distinctive because it has a patch on the left side of its cheek," according to Sieswerda.

Sieswerda says that Patchy also has a distinct injured dorsal fin. It was probably knocked off by a boat in the busy shipping area.

"The problem is these whales are pretty much playing in traffic. So as human activity and whales come together, there are some concerns," Sieswerda said.

There are still obstacles to navigate. But, given that humpbacks were on the endangered species list just a year ago, the recent sightings are a sign that the rest of the country might be heading in the right direction when it comes to pollution.

"That's the hope, that this is an indication not just for the water quality of-- of New York, but that we're making that progress nationally," Cronin said.

Humpback whales are here, like they are every summer, for the food.

They'll spend the season bulking up before heading south to the Caribbean, where they'll mate and give birth to calves.

How meditation is making a "huge difference" in one Baltimore school