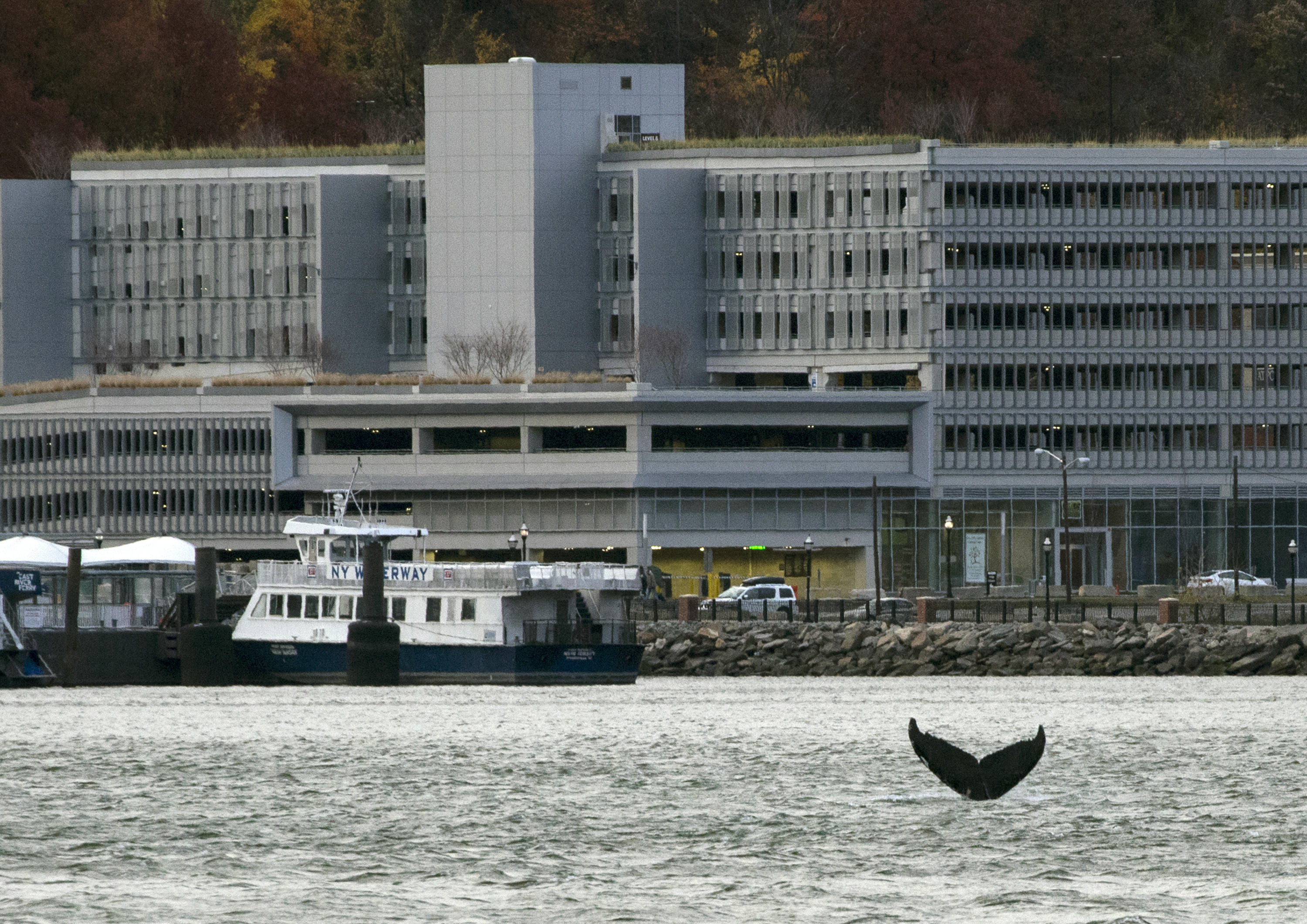 NEW YORK -- A humpback whale that has cavorted in the Hudson River for nearly a week, with sightings reported from the Statue of Liberty to well north of the George Washington Bridge, may be after a meal.

The U.S. Coast Guard said it has received dozens of calls reporting Hudson sightings since last Wednesday. The Hudson originates upstate in the Adirondack Mountains and flows down through the Hudson Valley, continues between New York City and Jersey City, New Jersey, and empties into the Atlantic Ocean.

Petty Officer Steve Stromeir said the whale doesn’t appear to be hurt and is just swimming around the island, CBS New York reported.

“The Coast Guard has put out a safety broadcast, just a notice to mariners to proceed with caution in the area of Liberty Island and just keep a look out and call in with further reporters if the whale has been sighted again or has moved,” Stromeir said.

Whale experts say they’ve seen increased numbers of mostly humpback whales in the New York area in recent years but it’s rare to have one travel up the Hudson, with this one spotted about 20 miles north approaching suburban Westchester County.

Although most experts agree water conditions have improved in the river in the 35 years since the passage of the Clean Water Act, they weren’t willing to say that the visit from the humpback had a direct correlation.

Dennis Suszkowski, science director of the Hudson River Foundation, and Howard Rosenbaum, director of the Wildlife Conservation Society’s Ocean Giants program, said it appears the humpback may merely have been chasing after Menhaden, or bunker fish, that swam up the Hudson.

“Oftentimes in the past when we have seen these animals in and around these waters we become concerned that they are sick or injured because they are not typically found here,” Rosenbaum said. “So far with the images we have seen we don’t have reason to believe that.”

Paul Sieswerda, president of a group called Gotham Whale, said the efforts to clean the Hudson have improved conditions but added, “what those conditions are precisely is difficult to say.” He suggested that legislation that reduced fishing limits for Menhaden make them more prevalent and therefore available to the humpbacks to hunt.

Some took to social media to share video of the whale in the Hudson.

Scientists have been accelerating their study of whales in the region in recent years. Last summer, the Wildlife Conservation Society, in collaboration with the New York Aquarium, teamed with the Woods Hole Oceanographic Institution in Massachusetts to deploy a high-tech buoy 22 miles off the coast of Fire Island to monitor several species of great whales.

In the past month, the buoy has detected three North Atlantic right whales, one of the world’s highly endangered whale species.

Sieswerda, a retired curator of the New England and New York aquariums, leads whale watching expeditions off the coasts of New York and New Jersey and said the number of whale sightings has soared since 2011. He said this year there have been 106 sightings, mostly of humpbacks, in an area called western New York Bight, a vast ocean region stretching from Montauk Point on eastern Long Island to Point Pleasant, New Jersey.