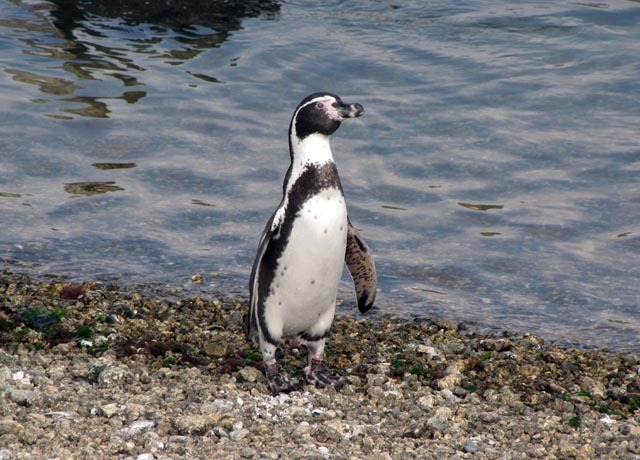 (AP) A 3-week-old Humboldt Penguin gazes plaintively from the opening of its nest, waiting for its parents to return with food. They may be out hunting for fish. But if they take much longer, they might not have a chick to provide for.

Invading rats with bodies up to 8 inches long have begun eating eggs and chicks, and some experts fear that unless the rats are eradicated, they could tip the Humboldt penguin toward extinction.

These penguins with distinctive black bands across their chests also are threatened by changing sea currents, fierce gulls and nesting pelicans whose relatively heavy bodies collapse their shallow earthen caves. And the biggest peril has been the nets of fishing boats that trap and suffocate the adults, at least until now.

"The cause of the decline in the penguin population is man," said bird veterinarian Paula Arce. "And of its eggs ... That could be the rats."

The Humboldt population has dropped from hundreds of thousands decades ago to below 45,000, said Alejandro Simeone, who directs the Ecology and Biodiversity Department at Andres Bello University in Santiago, Chile's capital.

The International Union for the Conservation of Nature has had the penguins on its vulnerable list since 1988.

Humboldt penguins nest only on several dozen coastal islands scattered along more than 1,000 miles of the Chilean and Peruvian coastline. They traditionally forage close by their homes, often mate for life and reproduce twice a year, a pair of eggs at a time. Hatchlings weigh as little as 2.3 ounces (65 grams) and are covered in a soft, grey down. They are utterly dependent on their parents for 10 perilous weeks until they can feed themselves at sea.

The father and mother take turns sitting on them while the other ventures into the ocean for food, usually never leaving the little ones alone. But they depend on the frigid Humboldt current to deliver sardines and other tasty fish from Antarctica, and the current has moved farther off the coast in recent years. Foraging now requires longer journeys, exposing their hatchlings to predators.

The Zoological Society of Milwaukee and the county zoo it sponsors, which includes a small Humboldt penguin exhibit, has spent more than $200,000 researching the birds' plight over the years, paying for annual population surveys and providing small stipends to Chilean researchers to make regular visits to the breeding grounds.

That money also supported research published in the March Journal of Ornithology that suggested rats could be devouring penguin eggs at a devastating rate.

Simeone said some of the rats that reach Islote Pajaro Nino, or "Bird Child Island," come from the Algarrobo resort on Chile's coast, where millionaire residents keep yachts in a sheltered harbor and spend their summers surrounded by elegant flowered gardens.

The gardens attracted the rats, and a 260-foot (80-meter) breakwater built in 1977 to protect the boats connected the mainland to the island, providing the long-tailed rodents with easy access to what had been the exclusive domain of seabirds. Not that they need it. The rats are capable of swimming several hundred meters (yards) or sneaking onto boats, which may have brought the rodents to some of the other islands where penguins nest much further from the mainland.

In other parts of the world, such rats have been eradicated using toxic bait that is harmless to birds, but applying such methods here would be complex and costly, Simeone said.

Roberta Wallace, the lead veterinarian at the Milwaukee Zoo who has done research on the Humboldt penguins on the island, said it would take poison, and many repeated visits to offshore islands, to break the rats' reproductive cycle. Concerted conservation efforts would be necessary to keep them away.

"You'd have to pay someone to go out there every day or week to eliminate the rats," said Wallace. "It's not like putting out poison once and everything dies. You'd have to keep at it, because they breed like crazy, and you'd have to make sure you don't do damage to other species. It's logistically a huge challenge."

Chile has banned the hunting of penguins through 2024, and since 1978, Islote Pajaro Nino has been one of several sanctuaries established by the government to protect them. Peru also has created sanctuaries and tried to keep predatory animals from critical nesting grounds. But neither country has barred small-scale fishing in the waters surrounding the nesting grounds, and thousands of penguins continue to die in nets each year - as many as 50 at a time in a single net, Arce said.

There's also no Chilean government budget dedicated to protecting penguins from the rats. It was only last week, Simeone said, that he was contacted by officials of the national fisheries service and environment ministry to discuss the situation. Neither agency responded to requests for comment.

Islote Pajaro Nino features steep hills and cliffs of sedimentary rock, surrounded by a narrow beach - ideal nesting grounds for seabirds - and every summer, tens of thousands of seagulls, penguins and pelicans fight over every inch (centimeter) of its 12 acres (5 hectares).

Arce led The Associated Press on a tour of the island, where the detritus of these battles - a slippery mess of excrement, decomposing carcasses, mud and rat feces - was overwhelming. The odor was nearly intolerable to humans, but it could be a paradise for adventurous rodents with a taste for eggs.

The penguins also suffer from competition with pelicans that nest on the ground, collapsing the shallow caves that penguins would otherwise return to each year. Arce pointed to spots where dozens of pelicans had marked their territory in former penguin nests - and to another area where, with help from the Milwaukee Zoo and its foundation, Arce and her team have built dozens of more durable artificial nests for the penguins.

Back at the first nest, six hours have passed with no sign of the young penguin's parents. A little over a mile (2 kilometers) away, a Humboldt swims toward the island. But then it drops under water, and doesn't surface again.

If at least one of its parents fails to appear after another night, the little penguin will succumb to hunger. Or perhaps the rats.

Dr. Harold Koplewicz, child psychiatrist, and president of the Child Mind Institute, talks about the study with the "CBS This Morning" co-hosts
Thanks for reading CBS NEWS.
Create your free account or log in
for more features.
View CBS News In
CBS News App Open
Chrome Safari Continue
Be the first to know
Get browser notifications for breaking news, live events, and exclusive reporting.