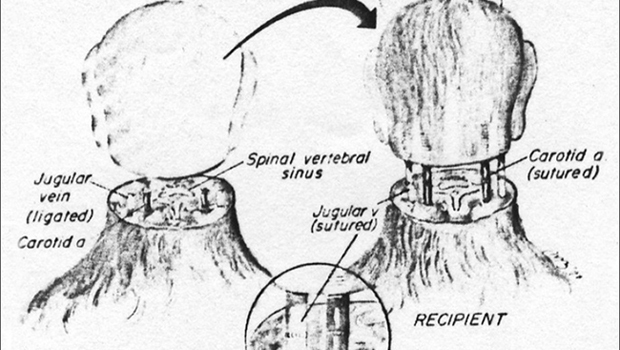 Dr. Jerry Silver can still picture the 1970 day when he stood in the lab as his colleague, Dr. Robert White, transplanted the head of a rhesus monkey onto the body of another rhesus monkey.

"I remember that the head would wake up, the facial expressions looked like terrible pain and confusion and anxiety in the animal. The head will stay alive, but not very long," the Case Western Reserve University neurologist told CBSNews.com. When doctors attempted to feed the re-connected head, the food fell to the floor. "It was just awful. I don't think it should ever be done again."

And yet, an Italian neuroscientist with the Turin Advanced Neuromodulation Group is now saying he not only thinks it should -- and could -- be done again, but that a similar procedure could be performed on humans.

Published in the June issue of open source journal Surgical Neurology International, Dr. Sergio Canavero's paper cites White's experiment as the first successful primate head transplant. His description of the experiment seems to contradict Silver's memory: Canavero writes that, "The monkey lived 8 days and was, by all accounts, normal, having suffered no complications."

When performed on animals, head transplants are hardly perfect: they leave the animals paralyzed below the point of transplant, as Silver witnessed in 1970. This is because doctors have yet to successfully connect the animals' spinal cords with their donor bodies.

"The greatest technical hurdle to such endeavor is of course the reconnection of the donor (D)'s and recipients (R)'s spinal cords. It is my contention that this technology only now exists for such linkage," he wrote. He cites advances in membrane-fusion substances such as polyethylene glycol (PEG) that he believes will facilitate the successful spinal cord fusion.

In Canavero's proposal, he outlines the surgical method. First, the two bodies must be in the same operating room. The head to be transplanted must be cooled to between 54.6 and 59 degrees Fahrenheit. Doctors then have an hour to remove both heads and reconnect the donor head to the circulatory system of its new host body. Cardiac arrest is induced throughout the procedure, with the host body's heart restarted upon successful connection.

In June, Silver and a team of scientists at Case Western and the Cleveland Clinic successfully restored connectivity in rats whose spinal cords had been completely severed. Canavero says such recent advances in reconnective technology give scientists reason to believe the procedure he outlines will be successful in humans.

Silver laughs at the correlation.

"It's light years away from what they're talking about," he said. Silver's research involved single rats, not connecting the spinal cords to heads of other rats. In these experiments, Silver explains, the animals are still able to breath, and their circulation is left intact.

Canavero explains in the paper that if the donor and host spinal cords are severed in the same fashion, mechanically connecting the spinal cord of the host body to the donor head will facilitate a more complete connection. PEG could be used in the fusing process, as research shows that it has been successfully used to fuse the spinal cords of dogs and guinea pigs.

"It is this 'clean cut' [which is] the key to spinal cord fusion, in that it allows proximally severed axons to be 'fused' with their distal counterparts," he writes.

"It's complete fantasy, that you could use [PEG technology] in such a traumatic injury in an adult mammal," Silver says. "But to severe a head and even contemplate the possibility of gluing axons back properly across the lesion to their neighbors is pure and utter fantasy in my opinion."

Canavaro expects the procedure to work in cases where the spinal cord was surgically severed; it would not work to repair nervous system function in victims of spinal cord injury.

Beyond the possibility, there are incredible ethical questions to answer. And there is the price tag: Canavero estimates the procedure would cost about $13 million. Silver hopes the idea will never even get to the point of cost considerations.

"Just to do the experiments is unethical," he says. "This is bad science, this should never happen."