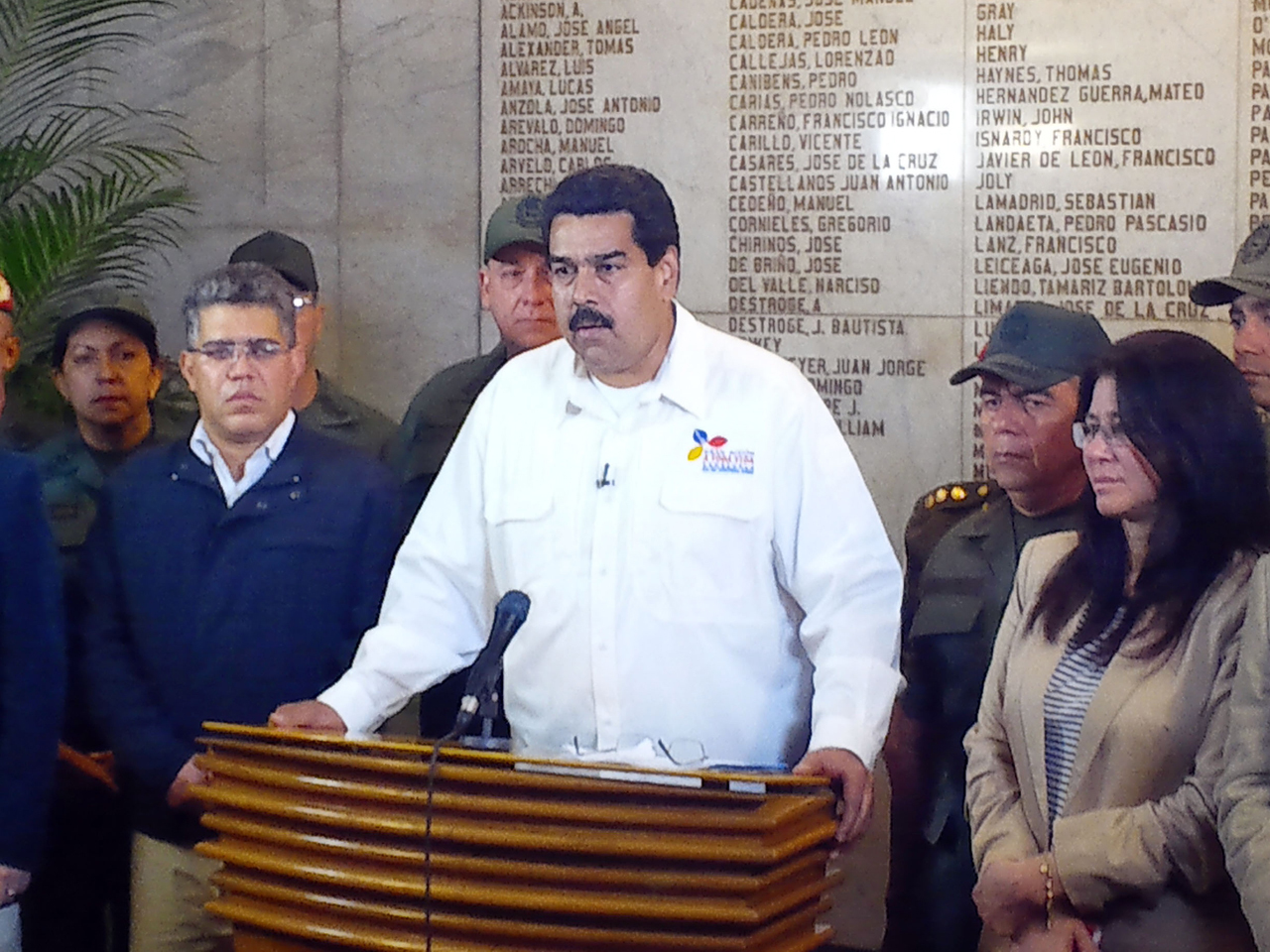 CARACAS, Venezuela Even in death, Hugo Chavez's orders are being followed. The man he anointed to succeed him, Vice President Nicolas Maduro, will continue to run Venezuela as interim president and be the governing socialists' candidate in an election to be called within 30 days.

Foreign Minister Elias Jaua confirmed those plans Tuesday, just hours after Maduro, tears running down his face, announced the death of Chavez, the larger-than-life former paratroop officer who had presided over Venezuela as virtually a one-man show for more than 14 years.

It was not immediately clear when the presidential vote would be held.

Considerable funeral pageantry was expected to honor Chavez, the political impresario widely adored among Venezuela's poor for putting the oil-rich state in their service.

Seven days of mourning were declared, all school was suspended for the week and friendly heads of state were expected in this economically challenged and violence-afflicted nation for an elaborate funeral Friday. No date or place was announced for Chavez's burial.

Venezuela's constitution specifies that the speaker of the National Assembly, currently Diosdado Cabello, should assume the interim presidency if a president can't be sworn in.

But the officials left in charge by Chavez before he went to Cuba in December for his fourth cancer surgery in a little less than two years have not been especially assiduous about heeding the constitution, and human rights and free speech activists are concerned they will continue to flaunt the rule of law.

Some in anguish, some in fear, Venezuelans raced for home and stocked up on food and water after the government announced Chavez's death, declining to say what exactly killed him. On Monday night, the government had said the president had been weakened by a severe, new respiratory infection.

Tuesday was a day fraught with mixed signals, some foreboding. Just a few hours before announcing Chavez's death, Maduro virulently accused enemies, domestic and foreign and clearly including the United States, of trying to undermine Venezuelan democracy. The government said two U.S. military attaches had been expelled for allegedly trying to destabilize the nation.

But in announcing that the president was dead, Maduro shifted tone, calling on Venezuelans to be "dignified heirs of the giant man."

Opposition leader Henrique Capriles, who lost to Chavez in the October presidential election and is widely expected to be the opposition's candidate to oppose Maduro, was conciliatory in a televised address.

Capriles, the youthful governor of Miranda state, has been bitterly feuding with Maduro and other Chavez loyalists who accused him of conspiring with far-right U.S. forces to undermine the revolution.

Across downtown Caracas, shops and restaurants begin closing and Venezuelans hustled for home, some even breaking into a run. Many looked anguished and incredulous.

"I feel a sorrow so big I can't speak," said Yamilina Barrios, a 39-year-old clerk who works in the Industry Ministry, her face covered in tears. "He was the best this country had."

Others wished Chavez's departure had come through the ballot box.

Carlos Quijada, a 38-year-old economist, said, "Now there is a lot of uncertainty about what will happen."

He said a peaceful transition depends on the government. "If it behaves democratically we should not have many problems," Quijada said.

Like most Venezuelans, he said his big concern is ending violent crime that afflicts all strata of society, from the poor who Chavez wooed with state largesse to the economic elite at the core of the political opposition.

Venezuela has the world's second-highest murder rate after Honduras: 56 people for every 100,000, according to government figures that nongovernmental groups say are understated.

But there had been several incidents of political violence.

In one, a group of masked, helmeted men on motorcycles, some brandishing revolvers, attacked about 40 students who had been protesting for more than a week near the Supreme Court building to demand the government give more information about Chavez's health.

The attackers, who didn't wear clothing identifying any political allegiance, burned the students' tents and scattered their food just minutes after Chavez's death was announced.

"They burned everything we had," said student leader Gaby Arellano. She said she saw four of the attackers with pistols but none fired a shot.

Outside the military hospital where Chavez's body was visited by loved ones and allies, an angry crowd attacked a Colombian TV reporter.

"They beat us with helmets, with sticks, men, women, adults," Carmen Andrea Rengifo said on RCN TV. Video images showed her bleeding above the forehead but she was not seriously injured.

Maduro and other government officials have recently railed against international media for allegedly reporting rumors about Chavez's health, although RCN wasn't one of those criticized.

After nightfall, several hundred people gathered at Bolivar Square, a symbolic place for Chavistas because it has a huge, 30-foot-tall statue of Simon Bolivar, the 19th century independence hero whom Chavez claimed as his chief inspiration.

Some arrived singing Venezuela's national anthem and holding up posters of Chavez.

Chavez leaves behind a political movement firmly in control of a nation that human rights activist Liliana Ortega, director of the non-governmental group COFAVIC, describes as a badly deteriorated state where institutions such as the police, courts and prosecutor's offices have been converted into tools of political persecution and where most media are firmly controlled by the government.

Maduro, whose government role had grown after Chavez went to Cuba for treatment, was belligerent early Tuesday. He reported the expulsion of one of the two U.S. attaches, and also said that "we have no doubt" that Chavez's cancer, first diagnosed in June 2011, was induced by "the historical enemies of our homeland."

Maduro compared the situation to the death of the Palestinian leader Yasser Arafat, claiming Arafat was "inoculated with an illness" and said a "scientific commission will prove that Comandante Chavez was attacked with this illness."

Chavez's inner circle has long claimed the United States was behind a failed 2002 attempt to overthrow him, and he has frequently played the anti-American card to stir up support. Venezuela has been without a U.S. ambassador since July 2010 and expelled another U.S. military officer in 2006.

U.S. State Department spokesman Patrick Ventrell rejected the assertion that the U.S. was trying to destabilize Venezuela. The claim, he said, "leads us to conclude that, unfortunately, the current Venezuelan government is not interested in an improved relationship."

Ventrell added that the assertion that Washington somehow had a hand in Chavez's illness was "absurd."

He hinted the U.S. could reciprocate with expulsions of Venezuelan diplomats.

President Obama said in a statement released Tuesday evening by the White House that, "At this challenging time of President Hugo Chavez's passing, the United States reaffirms its support for the Venezuelan people and its interest in developing a constructive relationship with the Venezuelan government.

"As Venezuela begins a new chapter in its history, the United States remains committed to policies that promote democratic principles, the rule of law, and respect for human rights."

While a working relationship with Venezuela is preferred, administration officials told CBS News, the United States will continue to pursue its interests in South America with or without it.

Chavez rose to fame by launching a failed 1992 coup, but never groomed a successor and many Venezuelans find Maduro, a former union agitator and Chavez's intellectual inferior by bounds, lacking the political heft.

Some political analysts believe that has made him more inclined to go on the attack as the presidential campaign begins in earnest.

Javier Corrales, an Amherst College political scientist, said he was concerned about the "virulent, anti-American discourse" under Maduro. "It seems to me this is a government that is beginning to blame the United States for all its troubles."

"This is very dark," he said. "This is the most nebulous period, the most menacing that the government has been, and the actions have been pretty severe."

Those actions have included hauling into court last week a leading opposition politician, Leopoldo Lopez, to face charges of influence peddling in a 15-year-old case that his lawyers say has passed the statute of limitations.

Lopez, who calls the charges ludicrous, ran logistics for Capriles in the Oct. 7 election after the government barred him from running for office.

In the absence of Chavez, the government is more aggressively seeking "to selectively destroy" opposition activists, Lopez said.

In his case, Lopez expects to be burdened by considerable legal distractions as he helps try to dislodge the Chavistas from power.