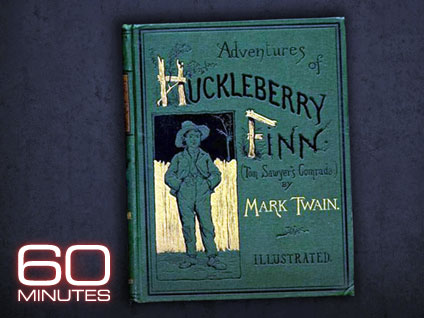 From the moment it was published in 1885, Mark Twain's "Adventures of Huckleberry Finn" caused controversy. It challenged authority, poked fun at religion and was accused of leading children astray. What's surprising is that 125 years later, Huckleberry Finn is still making news.

Today there are school districts in America that ban this American classic for one reason - one word: "nigger," a word so offensive it's usually called the "N-word."

As we first reported in March, a publishing company in Alabama says that schools don't have to change their reading list because they changed Huckleberry Finn. Their newly released edition removes the N-word and replaces it with "slave." It's a bold move for what is considered one of the greatest works in American literature.

Is it ever okay to say it?
An honest discussion about a racial slur with Byron Pitts, a reporter who speaks from experience.

Mark Twain's Huckleberry Finn is a classic set before the Civil War. The story is told by Huck, a white boy escaping an abusive father, and about his adventures with a black man named Jim, escaping slavery.

Huckleberry Finn is set along the Mississippi River. In it, Twain used the N-word 219 times. To some people, the word gets in the way of the story's powerful message against slavery; to others, Twain is simply capturing the way people talked back then.

"Are you censoring Twain?" correspondent Byron Pitts asked Randall Williams, co-owner and editor of NewSouth Books, publishers of the sanitized edition of Tom Sawyer and Huckleberry Finn that replaces the N-word with the word "slave."

"We certainly are accused of censoring Twain," Williams replied.

It's aimed at schools that already ban the book, though no one knows how many have. Williams says they are not trying replace Twain's original, N-word included.

Extra: Students weigh in
Extra: "Slave" vs. the N-word?
Extra: The power behind the N-word
Extra: Is it just marketing?

"If you can have the discussion and you're comfortable havin' the discussion, have it. Have it with it in there. But if you're not comfortable with that, then here's an alternative for you to use. And I would argue to you that it's still powerful," Williams said.

The new edition drew powerful reactions from Twain scholars, the press and ordinary readers - and it's worth noting most of the articles don't spell out the word, either.

"What's it say that people have been so passionate about it?" Pitts asked.

"I think it says that race continues to be a volatile and divisive subject," Williams said.

In this passage, Huck says the word three times in two sentences: "Jim was monstrous proud about it and he got so he couldn't hardly notice the other niggers. Niggers come miles to hear Jim tell about it and he was more looked up to than any nigger in that country."

"What do you think of Huckleberry Finn?" Pitts asked author David Bradley, who teaches at the University of Oregon

"It's a great book. It's one of the greatest books in American literature," Bradley replied.

He says the key to understanding Huckleberry Finn is through Twain's use of language, as the friendship between Huck and Jim unfolds.

"One of the first things I do is I make everybody say it out loud about six or seven times," Bradley said.

"Yeah, 'nigger.' Get over it," Bradley replied, laughing. "You know. Now let's talk about the book."

Students at Woodbury High School in Minnesota read the original book this past year. But there are differences in how their teachers approach it. Nora Wise says the word out loud in class; Karen Morrill does not.

"People are scared to talk about race," Morrill told Pitts.

Morrill told Pitts she is not afraid to talk about race in class.

"But you will not say out loud the N-word?" Pitts asked.

"That's just such as minor part," she replied.

"Aren't you giving the word more power than it deserves by not saying it?" Pitts asked.

"I didn't give the word its power. It came into my classroom with that power," she replied.

"I might not always reach and nourish and nurture every single student. But I can certainly do my best not to harm them," she added.

When Nora Wise says the word, she feels its impact on students is worth it. "It makes sense in this novel to teach it with the controversy. It makes sense to bring up all of the hard emotions. They come with it. It's not just a classic book. It's not just the way the words are written, it's the ideas," she said.

Eleventh graders Melvin Efesoa, Joseph Jaurdio and Ryan Farrell confronted the controversial word and their feelings about it.

"I feel that that word is in there for a reason. Twain put the word in there to get our attention. And every time we read it, it does exactly that. It gets our attention," Farrell told Pitts.

"If you replace that with the word slave, of course people would be less bothered, but I think Twain wants people to be a little bit bothered," Jaurdio said.

"Melvin, you smiled," Pitts remarked, while interviewing the students.

"I smiled because like I just kind of think that constant use (of) the N-word, and to me, it feels unnecessary," Efesoa said.

"Why? What is it about this word?" Pitts asked.

"It reflects on African-American history back then. And like I said, it's a history that nobody wants to relive," Efesoa said.

"Do you think the discomfort starts and stops with the N-word? Or the discomfort extends to a conversation about race?" Pitts asked NewSouth Books' Randall Williams.

"The publisher says they are providing a service," Pitts told David Bradley.

"They are," Bradley said.

"No. It's not Huckleberry Finn anymore," Bradley said. "We're talkin' about students: What are we teaching them? This may be their first encounter with slavery. It shouldn't be their only one. But that's one of the reasons we can't mess around with it. There is a reality there that you cannot avoid."

"But do you lose that reality when you take out the N-word and replace it with 'slave'?" Pitts asked.

Asked if he used the word, Williams said, "Oh, I used to. I grew up sayin' the word. It was all I knew. I never gave it any thought."

Williams runs NewSouth Books in Montgomery, Ala. - cradle of the Confederacy and where Jim Crow was once king.

Williams, a son of Alabama, says the civil rights movement changed him as it did much of the South. For him, the subject of race and the N-word goes beyond any debate about the book. It's also about how far the South has come.

"We learned to think differently about it and thank God we did," Williams told Pitts. "I mean the movement didn't just free, you know, black southerners. I mean it freed white southerners too."

"Freed you from?" Pitts asked.

"Kids use it... artists use it, the black rap artists use it, as you know, as I well know. Brothers use it all the time...when they talk to each other," Pitts said to David Bradley.

Bradley told Pitts, "I love it."

"'You're my nigger, man.' Look, in every group, there are words that you use, there are inflections, there is knowledge about what a word means to you, or to me, or how I mean it when I say it that is not an insult. I think one of the things that offends white people about it is that they can't say it. They say, 'Well, is it because of my inflection, or is it because...' It's, 'No, because you're not us.' Jeff Foxworthy says, you know, 'You can't make jokes about a redneck unless you are one.' You can't say 'nigger' unless you are one, and unless you are willing to accept everything that goes with it, which is a lot of good stuff, you know? And that's what they want, they want that good stuff," Bradley said.

"What's the good stuff that goes with that word?" Pitts asked.

"Having an awareness that you have, your people have overcome centuries of oppression. The pride of saying, 'Yeah, you can say anything you want and it won't slow me down one bit,'" Bradley said.

"But the word is hurtful," Pitts said.

"The word is not hurtful. How it is used is hurtful, the people who is saying is hurtful," Bradley replied.

Jeremy Richardson, 17, wrestled with how to react to the word, especially as the only black student in Nora Wise's English class.

"Having the teacher read it out loud to everyone, then everyone's looking at me like, 'Oh, well, she just said that. What are you gonna do about it?' Like I didn't really have a reaction. I basically ignored the fact," he told Pitts.

Richardson said while he didn't have an external reaction, "Internally, I just thought about it like 'This is wrong. Like I don't think that she should be saying this out loud.'"

"But why didn't you say something at that moment, do you think?" Pitts asked.

"I don't know. Maybe because I didn't want anyone to see that I was having a problem with her reading the word. That may be it. But I definitely did have a problem with it," he replied.

"Uh-huh," she affirmed, adding, "It's uncomfortable for me, too."

"How do you balance your strong conviction about using the words that are in the book with the notion that some of your students may be pained by that word?" Pitts asked.

"I don't have a calloused view about the pain, I don't. But on the other hand, I do feel like any time you come up against something that creates tension or creates discomfort. It is a point at which you could grow. And I think that life, in general, has many, many moments like that. And I don't think that teaching kids to step away from that is healthy," she said.

"Is the argument that these kids should be subjected to pain? I mean, I don't see the point of that," Randall Williams said.

NewSouth Books says it sold all 7,500 copies of its edited version of Huckleberry Finn and plans to print more in the fall.

"The only thing missin' from their reading of this will be the word itself. Have we taken every bit of the value of Twain out? Well, that's a preposterous argument. I can't even see that argument," Williams said.

Pitts said to David Bradley, "What the publisher's saying, by introducing this new edition, they can still have the teachable moment, and have the conversation about race. You look puzzled."

Mark Whitaker on the history of the Black power movement