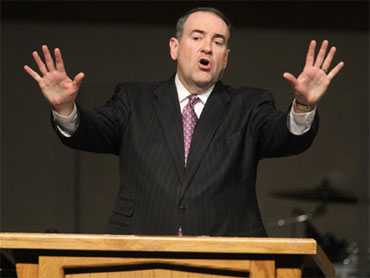 Former Arkansas governor and Republican presidential candidate Mike Huckabee said Wednesday that President Obama has "a different worldview" that is in part "molded out of a very different experience."

"Most of us grew up going to Boy Scout meetings and, you know, our communities were filled with Rotary Clubs, not madrassas," Huckabee added.

Huckabee, who is promoting a book, made the comments on the talk radio program "Focal Point," hosted by American Family Radio's Bryan Fischer. They came two days after Huckabee inaccurately suggested that Mr. Obama grew up in Kenya.

Huckabee said he misspoke about the president's childhood and had meant to reference Mr. Obama's four-year stint in Indonesia. But the explanation was not sufficient for many critics, who noted that Huckabee suggested that the president's views were shaped by growing up in Kenya with a father who sent the message "that the British were a bunch of imperialists." Mr. Obama barely knew his father as a child.

In his comments Wednesday, which you can watch here, Huckabee complained about the coverage of his Monday comments, stating that "it's really an indication of just how pathetic some of these folks are who claim to be journalists and reporters and have failed to do a decent job."

He said that "what I have never done is taken to position that Obama was born in Kenya or Indonesia or anywhere other than Hawaii where he claims to have been born," adding that he has stuck to that belief even though it "is not a popular position with conservatives."

When Fischer said Huckabee seems to believe "there may be some fundamental anti-Americanism in this president," Huckabee replied, "that's exactly the point that I make in the book."

He went on to complain that reporters perhaps "can't read" because they didn't acknowledge that he was referencing anger in the British press over Mr. Obama returning a bust of Winston Churchill to the British Embassy in his comments Monday. Huckabee called the return of the bust, which had been on loan, "a great insult."

"...the point was that they felt like that due to Obama's father and grandfather it could be that his version and view of the Mau Mau Revolution (a 1950s Kenyan uprising against British rule) was very different than most of the people who perhaps would grow up in the United States," Huckabee said Wednesday.

Huckabee's comment that "most of us grew up going to Boy Scout meetings and, you know, our communities were filled with Rotary Clubs, not madrassas," comes despite the fact that, as liberal media watchdog group Media Matters points out, Mr. Obama said in his book Dreams of my Father that he belonged to a boy scout troop in Indonesia.

During the 2008 presidential campaign cycle, false rumors circulated online and elsewhere that Mr. Obama had been educated in a madrassa, a Muslim religious school.