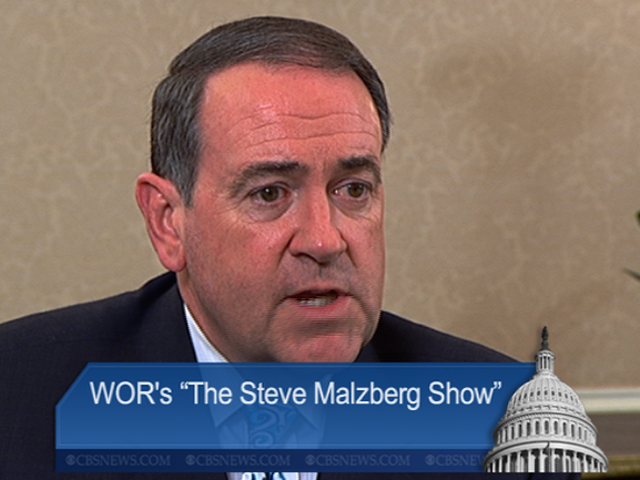 In a radio interview on Monday, potential 2012 presidential candidate Mike Huckabee repeatedly made false claims that President Obama grew up in Kenya.

In an interview on WOR's "The Steve Malzberg Show," Huckabee made reference to Mr. Obama's "having grown up in Kenya" and spoke of him growing up "with a Kenyan father and grandfather" - despite the fact that Mr. Obama grew up largely in Hawaii and barely knew his father at all.

In responding to Malzberg's question about whether "we deserve to know more about this man" and his origins, Huckabee responded that "I would love to know more."

"What I know is troubling enough," Huckabee said of the president. "And one thing that I do know is his having grown up in Kenya, his view of the Brits, for example, very different than the average American." The exchange was circulated by liberal media watchdog Media Matters.

A spokesman for Huckabee later said the former governor "meant to say the President grew up in Indonesia."

In the interview, Huckabee also pointed to the fact that Mr. Obama in 2009 returned a bust of Winston Churchill to the British Embassy, describing the act as "a great insult" to the British. (He did not mention that the bust had been on loan.)

"If you think about it, his perspective as growing up in Kenya with a Kenyan father and grandfather, their view of the Mau Mau Revolution in Kenya is very different than ours because he probably grew up hearing that the British were a bunch of imperialists who persecuted his grandfather," he said.

Indeed, Mr. Obama was born in Hawaii and spent much of his childhood there with his mother and his mother's family. He also lived in Indonesia from 1967-1971. In  "Dreams From My Father," Mr. Obama writes about his experience coming to terms with the absence of a strong paternal presence in his life.

Nevertheless, a small faction of Americans known as "birthers" continue to dispute Mr. Obama's American citizenship, despite the fact that the claim has been repeatedly debunked.

When asked if he would bring up the "birther" issue with Mr. Obama in a presidential debate, Huckabee expressed doubts.

"The only reason I'm not as confident that there's something about the birth certificate, Steve, is because I know the Clintons," Huckabee said. "And believe me, they had lots of investigators out on him, and I'm convinced if there was anything that they could have found on that, they would have found it, and I promise they would have used it."