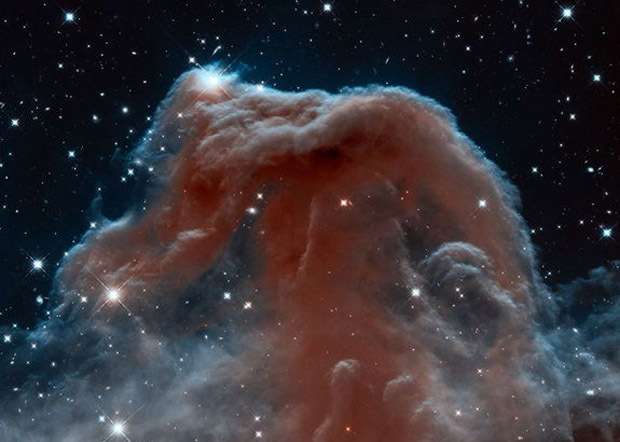 NASA's Hubble Space Telescope has snapped a spectacular new image of an iconic nebula to celebrate its 23 years of peering deep into the heavens.

The Hubble observatory, which launched on April 24, 1990, captured the Horsehead Nebula in infrared light, peering through obscuring veils of dust to reveal the object's hidden features.

"The result is a rather ethereal and fragile-looking structure, made of delicate folds of gas -- very different to the nebula's appearance in visible light," mission officials wrote in an image description today (April 19). The new observations allowed astronomers to create a dazzling video of the Horsehead Nebula based on Hubble's photos.

The Horsehead Nebula, also known as Barnard 33, is located about 1,500 light-years from Earth in the constellation Orion (The Hunter). The Horsehead is a huge interstellar cloud of gas and dust, like other nebulae, and the light from a nearby star gives it a beautiful glow.

The object is a popular observing target, and Hubble has taken numerous Horsehead photos over the years -- including in 2001, to celebrate the telescope's 11-year anniversary.

Your iPhone or Mac could be hacked with an iMessage

Old mining town gets a boost from underground science lab

The Horsehead's dramatic pillar is made of sterner stuff than the clouds surrouding the nebula, which have already dissipated. But the pillar will disintegrate as well in another 5 million years or so, astronomers say, and the Horsehead will go the way of the dodo.

The Hubble Space Telescope is perhaps best known for its photos in visible light. But the telescope's Wide Field Camera 3, which was installed by spacewalking astronauts in 2009, also takes crisp images in infrared wavelengths, researchers said.

Hubble, a collaboration between NASA and the European Space Agency, has made more than 1 million science observations since its 1990 launch, and it's still going strong. NASA announced last month that it had extended the telescope's science operations through April 2016.

NASA's highly anticipated successor to Hubble, the $8.8 billion James Webb Space Telescope, is slated to blast off in 2018. JWST is optimized to view in infrared light.