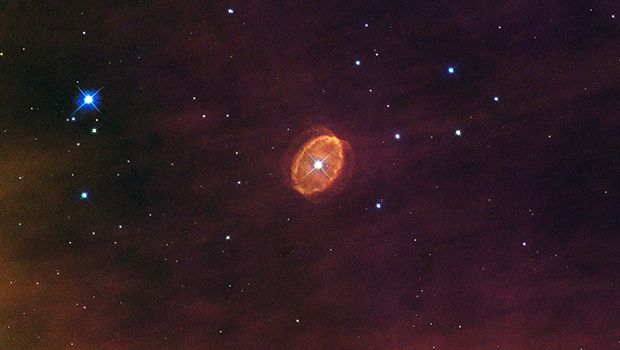 The Hubble Space Telescope has captured a striking new photo of a doomed star poised to explode in a devastating supernova event.

The Hubble photo of the star, known as SBW2007 1 (or SBW1 for short) reveals the star surrounded by its own expelled gas to create what appears to be a "lidless purple eye, staring back at us through space," NASA officials wrote in an image description. SBW1 is located more than 20,000 light-years away from Earth.

"The star was originally 20 times more massive than our sun, and is now encased in a swirling ring of purple gas, the remains of the distant era when it cast off its outer layers via violent pulsations and winds,." NASA officials wrote. "But the star is not just any star; scientists say that it is destined to go supernova." [Supernova Photos: Great Images of Star Explosions]

Scientists suspect SBW1 will ultimately die violently as a supernova because of its close resemblance to the famed supernova SN 1987A, a star that exploded in 1987. Both stars were travelling at comparable speeds, had the same brightness, and had very similar rings of the same size and age.

"At a distance of more than 20 000 light-years it will be safe to watch when the supernova goes off," NASA officials wrote. "If we are very lucky it may happen in our own lifetimes."