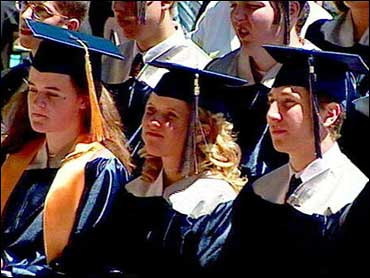 Once considered a springboard to success, the high school diploma now has little meaning in determining whether students are ready for college or work, a coalition of education groups contends.

Only comprehensive change, including more rigorous English and math requirements for all students, would restore the significance of a high school graduation, according to a nearly two-year review by the American Diploma Project.

The organization is an alliance of three groups whose leaders include top education officials in the administrations of former presidents Clinton and Reagan. Its report is based on comments from more than 300 educators and employers and an analysis of employment trends.

Project leaders, anticipating resistance to a stinging call for action, say they hope to spur gradual change among states. Lack of change, they say, will keep huge numbers of students heading for remedial college work or jobs for which they're unprepared.

"We haven't believed that the purpose of high school was to ensure every kid who graduated was ready to do college-level work. That is the big sea change that we're signaling here," said Michael Cohen, the former Clinton adviser and current president of Achieve, a nonprofit dedicated to helping states raise academic standards.

"Whether, as a parent, you think your kid is going to college or the workplace, those kids face the same rigorous demands, and they need to leave with the same core set of skills," he said.

That means all students should learn geometry, data analysis, statistics and advanced algebra, the report says. They also should show strong written and oral communication skills, plus analytic and reasoning ability typically linked with honors courses, it says.

No state requires the standards called for in the report, its authors say.

The report offers a series of skill expectations, or benchmarks, as a means for school leaders to review the content of their schools' courses — not just in high school but also in the grades that precede it, so students are on pace for the last years before graduation.

David Bloome, past president of the National Council of Teachers of English, said the report is not "smacking of reality."

"For a group to come out and say that a high school diploma has lost its meaning strikes me as a difficult position to maintain given how hard so many students work to obtain one," said Bloome, a professor in the College of Education at Ohio State University and a former public school teacher. As examples, he cited students who earn diplomas despite being new to the country, or those who graduate with vocational skills that fully prepare them for work.

Yet in the eyes of many of those in hiring and higher education, the diploma is little more than a certificate of school attendance, the report contends.

Leaders targeted only English and math because they are the basic subjects that give students access to everything else and because they are the easiest to take on first, said project director Sheila Byrd. They are also at the heart of the new federal law that's pressuring schools to raise achievement.

Among many other ideas, the report recommends high school exit exams that cover years of content and don't rely solely on standardized tests. It says colleges should start using those tests in admitting and placing students and be held accountable for student success.

States have balked at voluntary curriculum standards from the federal government. But this round of ideas comes from a nonprofit coalition, and it is grounded in what the real world demands, said Chester Finn Jr., an assistant education secretary under Reagan and current president of the Thomas B. Fordham Foundation, an education reform group.

Just aligning the views of schools, colleges and employers is significant, Finn said, as "it's like they're spinning in different orbits. They've just never been brought together."

Bloome, the Ohio State professor, said some educators may find the report helpful in that it can help make the case for more money for smaller class sizes, tutoring and other measures to improve achievement. But he added: "I suspect the most prominent reaction will be exhaustion with regard to yet another set of recommended mandates."

The project's partners are Achieve, the Fordham Foundation and the Education Trust, an advocacy group that focuses on improving the classroom performances of poor and minority students. Five states joined the effort — Indiana, Kentucky, Massachusetts, Nevada and Texas.