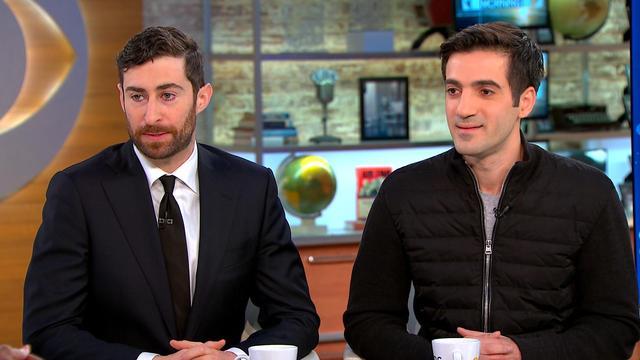 At least 1.6 million people stopped what they were doing on Sunday and opened up an app on their smartphones called HQ Trivia. A total of $15,000 in real prize money was up for grabs.

The hosted quiz game, which has become a hit in the few months it's been around, broadcasts live every night at 9 p.m. ET and on weekdays at 3 p.m. Players from around the world log on and are given 10 seconds to select the right answer to multiple choice trivia questions. If you get all 12 questions right, you win a share of the prize money, which is at least $2,000 – and has been as high as $18,000.

The app was co-created by Rus Yusupov, one of the minds behind the hugely popular -- but now defunct -- video sharing app, Vine. But it's not just the game itself that's fueling the app's popularity. It's also quirky host, Scott Rogowsky.

Rogowsky and Yusupov joined "CBS This Morning" to discuss what they believe is behind the phenomenon and what's next for the company.

"I think what HQ Trivia's done is taken the old-school idea of a trivia show – a quiz show – which has been around since the dawn of television, even radio, and made it a participatory event versus a spectator sport," Rogowsky said. "You don't have to be sitting in front of a TV to take it anywhere, play anywhere. We combine production value and a host and graphics and music and made it a produced experience."

What distinguishes the app from other trivia games is that it's happening in real time. If you don't log on when it broadcasts, you miss out.

"We thought, 'Hey, let's combine some of our favorite elements of mobile gaming, live video and TV production, mash them together and create an experience that people, frankly, have never had before," Yusupov said.

But as Yusupov sees it, the driving force behind its popularity is the way the game brings people of all ages together.

"For example, Dan Rather, he played with his family at Christmas and welcomed HQ Trivia as a new family tradition where, you know, his grandson and then his family all contributed for the big win. So we're seeing people from 8 to 80 play it and that's really incredible," Yusupov said.

As of right now, the app relies on venture capital to fund the cash prizes. When asked to explain how they plan to grow the company, Yusupov said their focus right now is to "really hit popular culture" before turning their focus to profitability.

"Advertisers and sponsors are reaching out and we are working on interesting things on that front. So, stay tuned," Yusupov said.

Regardless of what's next for the company, "CBS This Morning" co-host Gayle King sees hosts like Rogowsky, who playfully riffs throughout the 15-minute game, as the "secret sauce" behind the success. Rogowsky, who has been doing comedy for 13 years, was on the verge of a cross-country move when the opportunity surfaced.

"I'd been doing standup since college. Actually, my 13th year anniversary is next week of doing standup comedy," he said. "After 10 years in New York, I was out in L.A. last year, and I thought maybe L.A. is the place to be, so I gave up my apartment in May, was all set to move and then HQ came calling and thankfully I decided to give it a shot."

Taliban claims to defeat resistance amid fear for trapped Americans