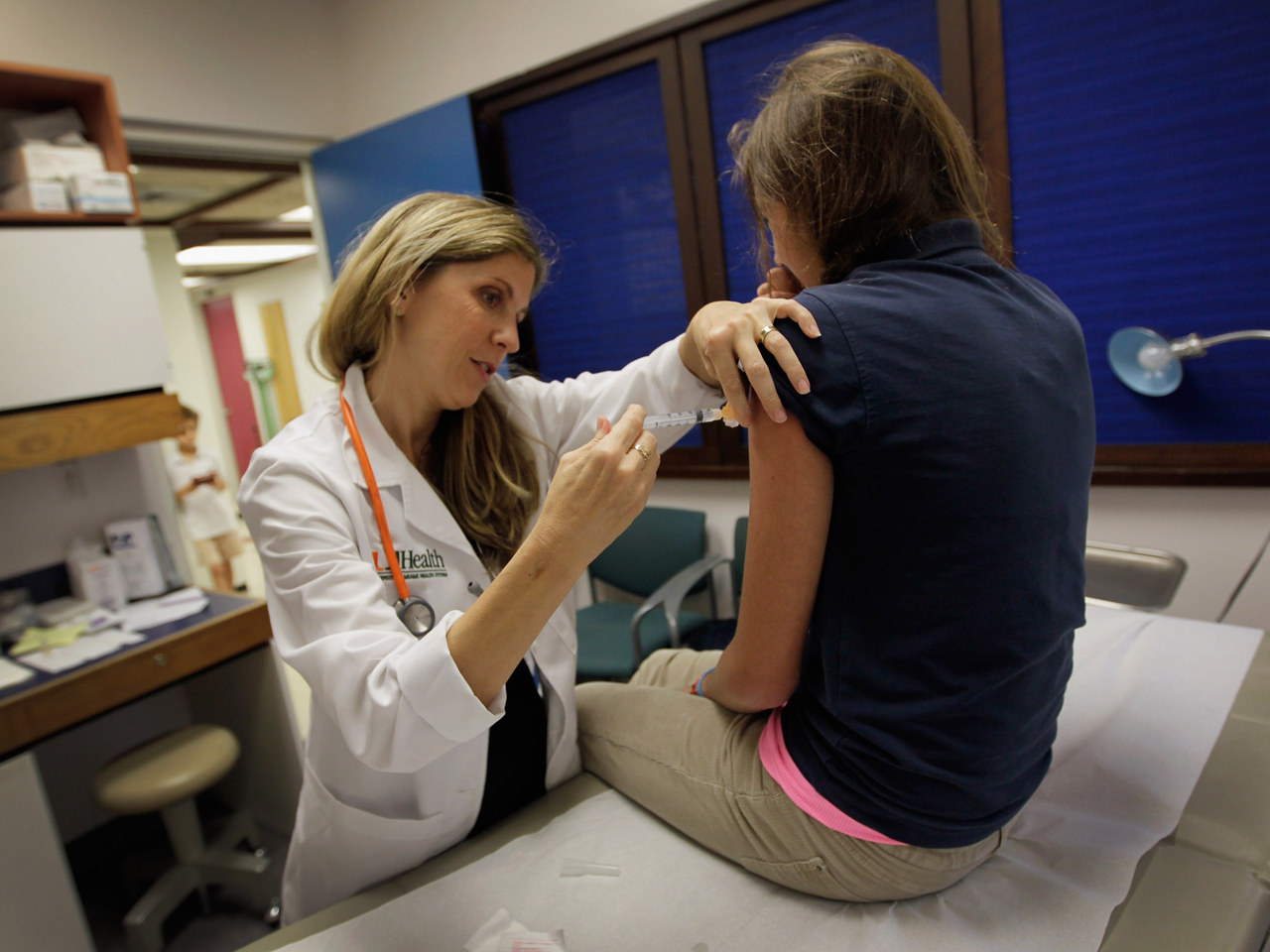 The vaccine against human papillomavirus (HPV) infection, which doctors believe causes most cases of cervical cancer, appears even more effective than believed, a new study finds.

“After eight years of vaccination, the reduction in the incidence of cervical neoplasia [abnormal growth of cells], including pre-cancers, have been reduced approximately 50 percent. This is greater than what was expected – that’s pretty exciting,” said lead researcher Cosette Wheeler. She is a professor of pathology and obstetrics and gynecology at the University of New Mexico, in Albuquerque.

The study also showed that the protection appears to occur even when only one or two of the recommended doses of the vaccine are given.

“Right now, the recommendation is three doses for girls and boys before the 13th birthday, so that you are protected before you become exposed,” Wheeler explained.

“People thought that three doses of vaccine were necessary, but there’s a lot of people who are getting one and two doses, and people are getting protection from one or two doses,” she said.

On average, 40 percent of girls aged 13 to 17 in New Mexico had received all three doses in 2014, the researchers found. But, Wheeler said, “It may be that two doses are sufficient.”

Protection from HPV is also coming from what’s called herd immunity​, which increases as more people are vaccinated and reduces the spread of HPV, Wheeler said. “Herd immunity means that the probability of getting infected decreases for everybody, even the people who aren’t vaccinated​,” she explained.

Moreover, the vaccines protect against more types of HPV than they were designed to do, she added.

This study even took into account changes in Pap test screening over the last 10 years.

In 2009, the American College of Obstetrics and Gynecology said most women under 21 do not need Pap test screening and recommended longer times between screening. In 2012, the U.S. Preventive Services Task Force said women, regardless of age, do not need to get screened more than every three years, Wheeler said.

If these changes were not taken into account, the effect of the vaccine would appear even greater than it already is, because it would assume that more women were being screened than actually were, she said.

“Parents and doctors should pay attention. These vaccines are highly efficacious,” Wheeler said.

It’s up to doctors to be sure kids are vaccinated, she said. “It’s their job, just like other vaccines, to provide them to their patients. They are the key to get this done,” Wheeler added.

In addition to cervical cancer, HPV can cause genital warts in men and women, and some head and neck cancers.

Although cervical cancer can take decades to develop, it’s important to protect children before they become sexually active and risk getting infected with HPV, which is why Wheeler strongly recommends: “Get your kids vaccinated – both your boys and your girls – before their 13th birthday.”

For the study, Wheeler and colleagues collected data on young women tested for cervical cancer with Pap tests from 2007 to 2014, who were part of the New Mexico HPV Pap Registry. New Mexico should be considered representative of the whole country, Wheeler said.

One expert said the findings make the case for HPV vaccination even stronger.

“These data highlight and provide even more evidence as to the efficacy of the vaccine in preventing HPV infections and related diseases,” said Fred Wyand, a spokesman for the American Sexual Health Association/National Cervical Cancer Coalition.

Increasing HPV vaccination rates “goes back to the importance of health care provider’s recommending the vaccine to parents and patients,” he said. “Provider recommendation carries much weight, and parents are far more likely to have their child vaccinated if the provider encourages it.”

Another approach to increasing vaccination rates is to “normalize” HPV vaccines, he said. “Rather than treat it as something exotic, it should just be offered as part of the routine adolescent vaccine program,” Wyand said.

Dr. Metee Comkornruecha, an adolescent medicine specialist at Nicklaus Children’s Hospital in Miami, agrees that the vaccine “is effective, and parents should have their sons and daughters vaccinated.”

The report was published online Sept. 29 in the journal JAMA Oncology.