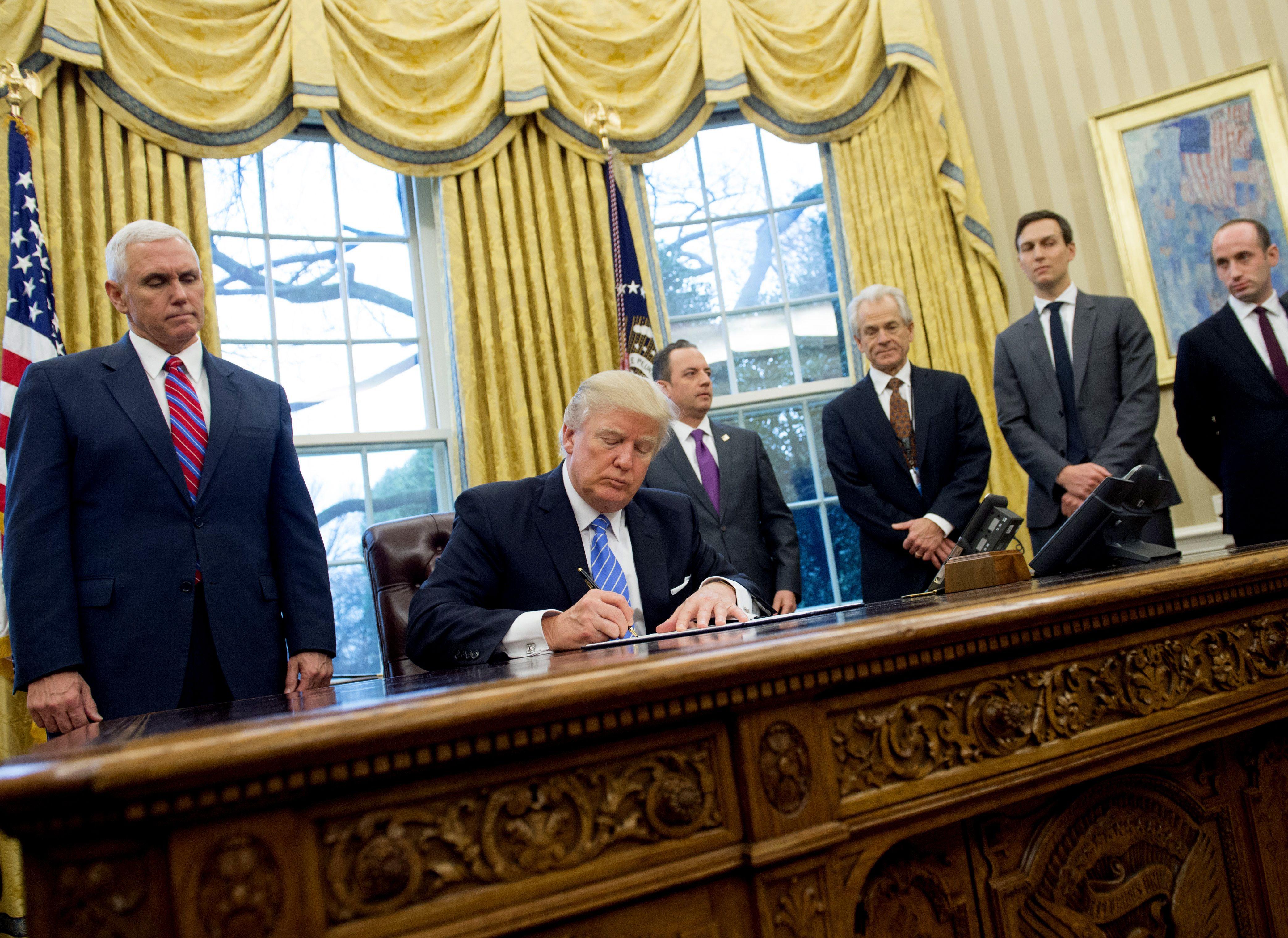 Anyone who’s ever caught a glimpse of Donald Trump’s three-story penthouse in New York’s Trump Tower knows that the United States’ 45th president likes the look of royalty. His Versailles in the Sky, as it has come to be known, is accented with marble, the Trump family “coat of arms,” and paintings of Greek gods. There is also, of course, loads and loads of gold.

So, it’s not particularly shocking that President Trump has taken those decor tastes to the White House. What may surprise people, however, is just how fast the redecorating has occurred. Just one week into his presidency, here are three notable choices Donald Trump has made with regard to the look of the Oval Office.

When George W. Bush took over the Oval Office, he wanted a rug that conveyed there was an optimistic man at the office’s helm. As such, first lady Laura Bush designed a beige-and-blue carpet with golden sunbeams radiating out from a robust presidential seal. Then, in August 2010, President Obama toned down the vibe of the Oval Office a bit, unveiling new golden striped wallpaper, new golden-brown couches and, most notably, a new tan-and-navy rug with inspirational quotes from five American heroes around its outer edge.

The quotes around President Obama’s Oval Office rug included the famous line from FDR’s inauguration speech, “The only thing we have to fear is fear itself;” Martin Luther King Jr.’s “The arc of the moral universe is long, but it bends toward justice;” and President Lincoln’s famous declaration, “Government of the people, by the people for the people.” It also featured the famous JFK line, “No problem of human destiny is beyond human beings,” and Teddy Roosevelt’s semi-socialist statement, “The welfare of each of us is dependent fundamentally upon the welfare of all of us.”

Inspirational, perhaps, but apparently not President Trump’s taste. He has already followed in the footsteps of his predecessors and swapped out the Oval Office rug. The rug he chose instead? A red-and-beige carpet with green leaves around its outer edge, which was used briefly by George W. Bush but originated in the Reagan era.

For now at least, it appears Donald Trump has chosen to keep the same desk used by President Obama. This, however, isn’t actually all that surprising when one examines the style of said desk. The Resolute Desk, as it is officially known, is the most ornate of the Oval Office desks and it’s most popular one.

Used by Barack Obama, George W. Bush, Bill Clinton, Ronald Reagan, Jimmy Carter, and John F. Kennedy, the Resolute Desk has been used by more U.S. presidents than the Hoover Desk, the Johnson Desk and the Wilson Desk combined. Opulent and highly ornamented, its wood was salvaged from a British ship called the HMS Resolute, which explored the Arctic in the mid-1800s.

Not only is it the most in keeping with Trump’s signature style, the Resolute Desk famously features front panels that provide children in the White House with an iconic hiding place, featured in famous photographs of young John-John and Caroline Kennedy. And while Barron Trump is probably a little old now for a game of hide and seek, Ivanka, Don Jr., and Eric each have several children likely to appreciate that feature of the Oval Office in the coming years.