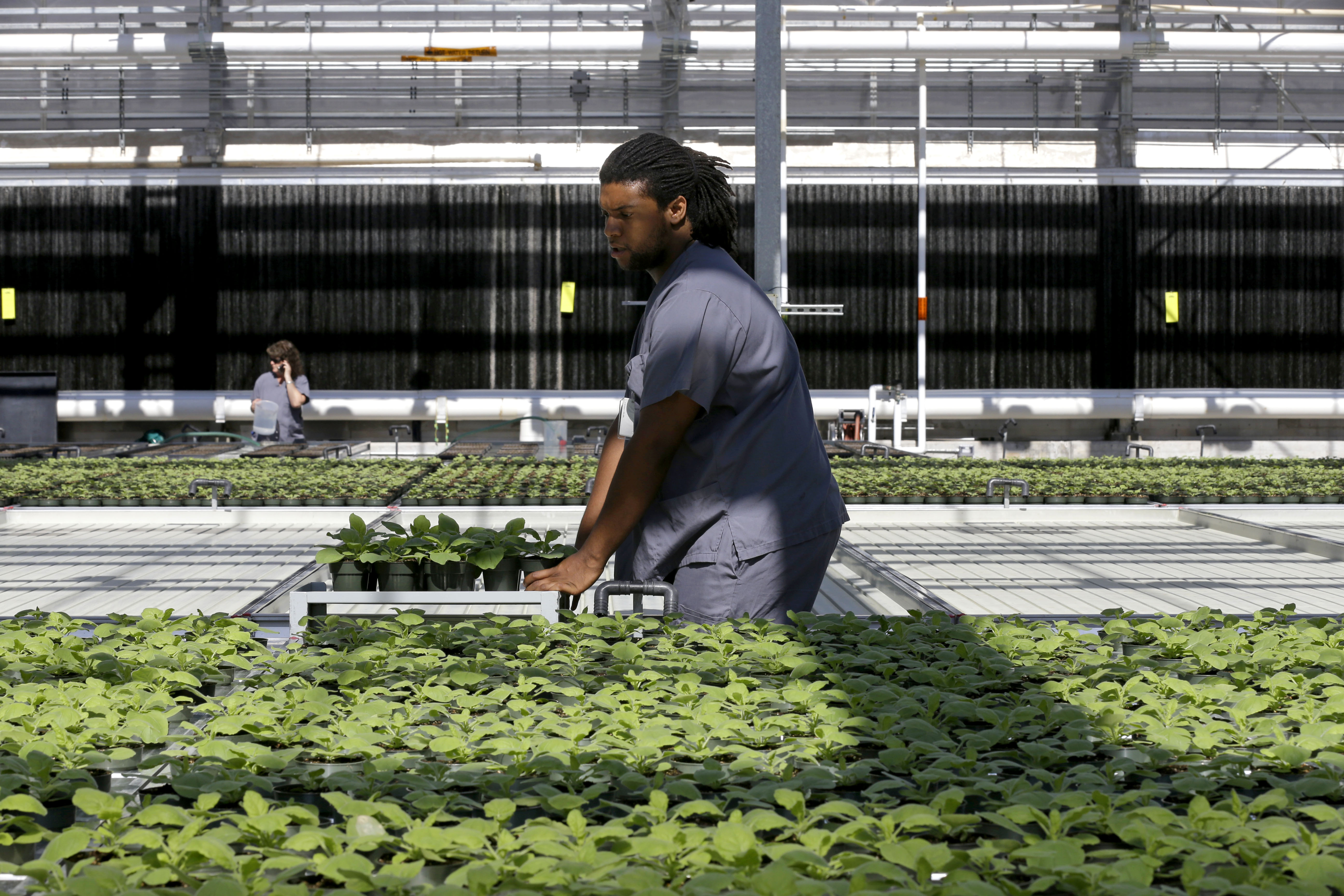 It's an eye-catching angle in the story of an experimental treatment for Ebola: The drug comes from tobacco plants that were turned into living pharmaceutical factories.

Using plants this way - sometimes called "pharming" - can produce complex and valuable proteins for medicines. That approach, studied for about 20 years, hasn't caught on widely in the pharmaceutical industry.

But some companies and academic labs are pursuing it to create medicines and vaccines against such targets as HIV, cancer, the deadly Marburg virus and norovirus, known for causing outbreaks of stomach bug on cruise ships, as well as Ebola.

While most of the work in this area uses a tobacco plant, it's just a relative of the plant used to make cigarettes.

"It's definitely not something you smoke," said Jean-Luc Martre, a spokesman for Medicago, a Canadian company that's testing flu vaccines made with tobacco plants.

Medicago has a new production facility in Research Triangle Park, North Carolina. Once approved by federal authorities, it's expected to be able to make 30 million doses of seasonal flu vaccine a year, or 120 million vaccine doses to fight a major outbreak of "pandemic" flu if the government requests it.

Scientists favor tobacco plants because they grow quickly and their biology is well understood, said Ben Locwin, a pharmaceutical biotech consultant in Portsmouth, New Hampshire, who is considered an expert on plant-produced medicines by the American Association of Pharmaceutical Scientists.

The North Carolina operation can handle as many as 90,000 plants. Under the whir of fans, rows of young seedlings grow for about a month, until they are about a foot tall. Then they are taken by robots to another section of the facility, turned upside down and dipped in a tank to be "infiltrated" with whatever proteins they wish to grow.

There are a number of Ebola treatments and vaccine in development, and one comes from tobacco plants grown in specialized greenhouses at another operation, Kentucky BioProcessing, in Owensboro, Kentucky.

That experimental treatment, called ZMapp, uses proteins called antibodies, and is designed to inactivate the Ebola virus and help the body kill infected cells. It hasn't been tested in people but had shown promise in animal tests, so it was tried in three people sickened by Ebola in West Africa - two U.S. aid workers, who appear to be recovering, and a Spanish missionary priest, who later died.

The last few doses available are in Liberia. Kentucky BioProcessing, which produces it for the San Diego-based Mapp Biopharmaceutical, said it would take several months to make more, but it is working to increase production.

In general, the idea behind pharming is to slip the genetic blueprints for a particular protein into a plant and let the plant's protein-making machinery go to work. Then the protein can be extracted from plant tissues. While tobacco plants are a mainstay of such work, proteins also have been produced in other plants, such as safflower and potato.

In fact, the only medicine made this way that the federal government has approved for general use in people is made in a laboratory from cells of carrot plants. It treats a genetic illness called Gaucher's disease. The drug was approved in 2012 by the Food and Drug Administration.

A plant-made vaccine for a chicken disease gained approval from the Department of Agriculture in 2006 but was never brought to market. Another plant-produced product to fight germs that cause tooth decay has been approved for use in Europe.

The lack of any stronger track record for approved drugs in the United States is a key reason why the plant-based technology hasn't been embraced more fully, Locwin said. That's despite the fact that it offers benefits like lower cost than the standard approach of using vats of cells from mammals to churn out complex proteins, Locwin said.

Some companies use cells from bacteria instead, but they can't always produce the complicated proteins that drug companies need, he said. The plant-based approach "has a tremendous amount of promise, but it doesn't yet have the FDA blessing across the board to be able to say this is successful" and a proven way to get a drug to market, he said.

And it would cost companies money to change over to the new technology, he said.

Plant-based drugs have attracted the attention and funding of the federal government, however, as a fast and cheap approach to make a lot of vaccine material in case of terrorist attacks, said Daniel Tuse, a consultant and managing director of Intrusept Biomedicine, which also works with tobacco plants in Owensboro.

If a new germ appears, genetic material from it can be quickly inserted into plants, and large numbers of the plants can churn out supplies of material for vaccines or treatments, he said.

The plant-based experimental Ebola treatment was developed with government support.