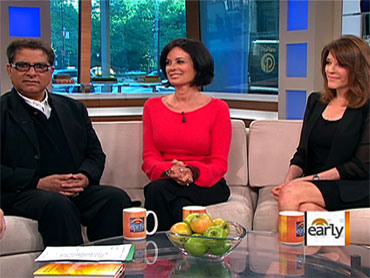 Do you have a shadow?

That's how the authors of "The Shadow Effect: Illuminating the Hidden Power of Your True Self" refer to people's dark side.

Spiritual explorers Dr. Deepak Chopra, Debbie Ford, and Marianne Williamson appeared on "The Early Show" Thursday to discuss how the repressed part of yourself can act like a shadow in your life and can ruin your chances of success.

Read an excerpt of "The Shadow Effect"

In the book, each author uses their own signature approach to shed light on the part of themselves we deny but that still directs our lives, often in self-destructive and self-sabotaging, unconscious ways.

According to the authors, by uncovering what we have been hiding from, we are freed from the binds of the past and propelled on a journey to wholeness. No longer living a half-life, we are capable of achieving our dreams and reclaiming the happiness that is our birthright.

Chopra said his "dark side" is an addictive personality. He said he's turned around his life around.

"I used to rescue a patient after a heart attack and then go outside and smoke a cigarette. Or get smashed on the weekend. I even tried LSD and mushrooms and all of that. But at a certain point, I said, 'How can I take advantage of this, and really, now, I'm obsessed with, addicted to energy, to creativity, to spirituality and look at what it's done for me."

Williamson admitted her dark side is that she can be tough if someone is messing with her.

Debbie Ford said she has many shadows. She joked that they've probably helped her write all her eight books. However, she said right now hers is being controlling.

For more with the authors of "The Shadow Effect" and their shadows and how you can beat yours, click on the video below.