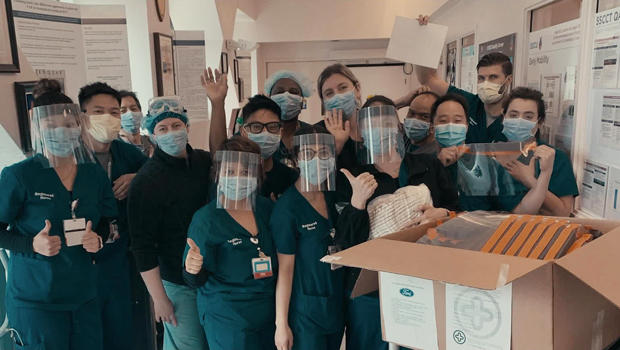 Remember TV commercials that showed fans at crowded football games, or that focused around cities packed with people, or with celebrities delivering lighthearted messages? You might call them the "before coronavirus" commercials – ads that definitely don't work now.

Just ask the people at KFC, who launched its "finger lickin' good" campaign just before the pandemic began, showing people eating out:

Ford Motor Company was one of the first to pivot to a new style of ads. "Talking about our latest model and features and benefits, it just isn't relevant right now," said Matt Van Dyke, director of U.S. marketing.

"We're here for a reason, and it's bigger than selling cars…"

So, rather than marketing cars, the company offered payment relief to customers; then, Ford spoke of its commitment to building respirators, ventilators and face shields.

Advertising has shifted during crises before. Poster ads in World War II emphasized patriotism, and commercials running after 9/11 spoke of community. So, during this pandemic, Walmart tells customers we're "here for you" in ads featuring its employees singing "Lean on Me"; Samsung promises "We'll get through this together"; and Uber shows people staying home, in an ad that thanked them "for not riding with Uber."

Correspondent Anna Werner asked, "If you're not selling a product, what is your advertising doing for you?"

"Your advertising right now is really keeping you top-of-mind," said Ad Age senior editor Jeanine Poggi. "So, when people are ready to return to, you know, movie theatres and ready to go travel, and ready to go to the mall, you will be in their mind."

Not everyone has continued to advertise; as of April, television ad spending had fallen 41 percent, and of those still advertising, 92 percent adjusted their messages.

And those commercials featuring cities? They had to change, too. Hometown ad agency Doner sent a message of hope to fellow Detroit residents:

"It came from the heart; it came from a place of wanting to help," said Doner brand strategist Alex DeMuth, who came up with the idea. "While we're not able to make masks or ventilators out of our commercials, we can use the work that we do to help speak to people."

His colleague, director of content Zeke Anders, shot the ad with a single camera, socially distanced, from his care.

"This is really what I did when I filmed, I just drove around," Anders explained. "To be there, it was very hypnotic, and very emotional in a sense. And I just hope that that sense and that spirit of Detroit comes through."

And some familiar voices are delivering new, powerfully-different messages. Beginning in March, public service announcements popped up online from actor Matthew McConaughey. He has worked on writing and producing a series of six PSAs, including one aimed at motivating people to stay home during the "war" against the coronavirus.

"We are at war … Staying home is not a retreat. It's the most brave and aggressive weapon we have against this enemy."

"It felt right to maybe just throw some hope out there at a time when people were sort of in shock," McConaughey said.

"I had quite a few people come, you know, chest puffed up, and go: 'I didn't think of it that way, you know?  I didn't think of it being a strong choice; I thought of it as a defeatist move to stay in. And now I understand that this is a different kind of enemy that I'm here to battle.'"

Another ad takes a lighter approach, with McConaughey as the character "Bobby Bandito": "It's high time we catch this killer, 'cause we got more living to do," he says in the ad, which also features instructions on how to turn a bandana and coffee filter into a face mask. "Now remember, stay at home, but if you gotta go, strap it on like so!"

His latest production?  A PSA he calls "It's About Us."

Werner asked, "What is the message you want people to listen to, that you really want them to hear?"

"Virus doesn't give a damn who you voted for, or I voted for, you know?" he said. "And we shouldn't care about that right now."